Ravens seek to extend run of dominance over Dolphins 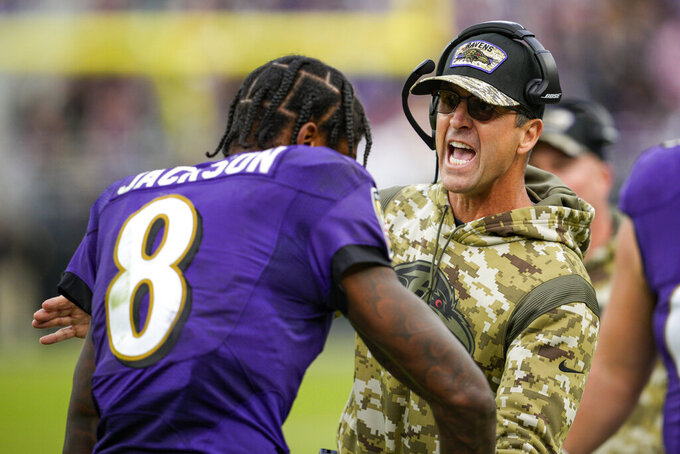 BETTING LINE: Baltimore by 7 1-2, according to FanDuel SportsBook.

TURNOVER DIFFERENTIAL: Ravens minus-3; Dolphins minus-5.

RAVENS PLAYER TO WATCH: QB Lamar Jackson. A South Florida kid comes back home, and his only other game as a pro at Hard Rock Stadium was the 59-10 win. He completed 19 of 24 passes last week after halftime to help the Ravens beat the Vikings.

DOLPHINS PLAYER TO WATCH: WR Jaylen Waddle. The Ravens have given up seven touchdown passes of 40 yards or more this season, four of them on the opening drive of a half. The Dolphins have been solid on opening drives of the first and third quarters this season.

KEY MATCHUP: Ravens WR Marquise Brown vs. the Miami secondary. Xavien Howard and the corps of Miami defensive backs get a huge test this week.

KEY INJURIES: For the Ravens, S DeShon Elliott (bicep, pectoral) is gone for the year and RB Latavius Murray (ankle) is listed as doubtful for Thursday, though TE Nick Boyle (knee) may be in line for his 2021 debut. For the Dolphins, C Greg Mancz (ankle) was placed on injured reserve Wednesday and QB Tua Tagovailoa (finger) is questionable — meaning Jacoby Brissett may start again.

SERIES NOTES: Baltimore has won eight of the last nine meetings, the last three by a combined 137-16 score. ... The last meeting between the teams was Brian Flores’ first game as Dolphins coach and the worst regular-season loss in Dolphins history. Miami’s 49-point defeat pales only compared to the 55-point playoff loss to Jacksonville to close the 1999 season — Dan Marino’s final game. ... The Ravens are 10-0 against Miami when scoring at least 20 points. ... This is the third night game between the teams. Miami won a home Sunday night game 19-6 on Sept. 17, 2000; Baltimore won a home Thursday night game 40-0 on Oct. 26, 2017.

STATS AND STUFF: Jackson had a perfect 158.3 rating in his only other NFL game at Hard Rock Stadium, the 59-10 win over Miami in 2019. Tom Brady (then with New England), Geno Smith (Jets) and Ryan Tannehill (Dolphins) are the other quarterbacks with such a rating in a game on Miami’s current home field. ... The Ravens and Dolphins are two of 11 teams yet to miss an extra point this season. Baltimore is 19 for 19, Miami 16 for 16. Baltimore is also 16 for 17 on field goals, meaning the Ravens have missed just one kick all season. ... Ravens coach John Harbaugh is five wins shy of 150 for his career. Depending on how Dallas does over the next few weeks, either he or Cowboys coach Mike McCarthy (currently at 147) will be the 25th coach in NFL history to hit that milestone. ... Neither the Ravens nor the Dolphins have a 50-yard play on offense this season. The last team to go a full season without one was the 2017 Buffalo Bills. ... The Dolphins are 12-10 on Thursdays, 5-2 at home; Ravens are 8-5 on Thursdays, 1-4 on the road. ... The Ravens are playing their first road game in 39 days after four consecutive home games and a bye. Since the merger and excluding the 1982 strike season, the 39-day gap between road regular-season games ties the 10th-longest such streak in the NFL. The record there is held by Miami, which went 45 days between road games in 2016.

FANTASY TIP: Jackson and Brown are obvious plays, and Dolphins TE Mike Gesicki should be as well. This game also features two elite kickers in the Ravens’ Justin Tucker and the Dolphins’ Jason Sanders. Plenty of options to grab early leads in games this week.