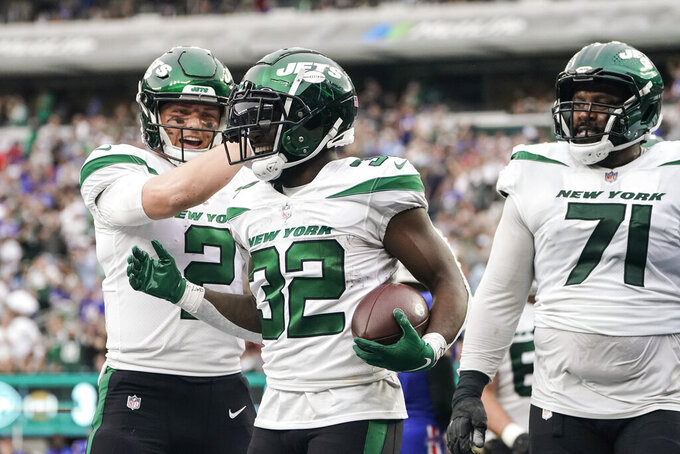 New York Jets quarterback Zach Wilson (2) celebrates with teammate Michael Carter (32) after Carter rushed for a touchdown during the first half of an NFL football game against the Buffalo Bills, Sunday, Nov. 6, 2022, in East Rutherford, N.J. (AP Photo/John Minchillo)

FLORHAM PARK, N.J. (AP) — The New York Jets are unlikely to have top running back Michael Carter against the Minnesota Vikings on Sunday.

Carter was listed Friday as doubtful for the game after not practicing all week because of a sprained lower left ankle suffered during the Jets' 31-10 win over Chicago.

“I'm progressing really well, I can say that,” Carter said in the locker room Friday. “We'll see. I had a really good week. I feel really good.”

The Jets, who are 7-4 and in the middle of the AFC playoff race, are getting defensive tackle Sheldon Rankins back after he missed two games with an elbow injury. Tight end Kenny Yeboah is also set to return after sitting out two games with an injured calf.

Carter, who has 370 yards rushing and three TDs, assumed the role of lead running back after rookie Breece Hall was lost for the season in October with a torn ACL. Carter is third on the Jets with 28 receptions for 209 yards.

Rookie Zonovan Knight ran for 69 yards on 14 carries and added three catches for 34 yards in his NFL debut against the Bears. It was the most yards rushing by a Jets player in his debut since Matt Snell had 82 in 1964.

And it came after Knight spent the first seven weeks of the season on the practice squad and then was inactive for three games after being signed to the active roster.

“I was blessed to even get the opportunity and then to go out there and excel and know I didn't lose a step, especially after taking 11, 12 weeks off and doing practice squad stuff,” Knight said. “It just takes a lot of self control and trusting the process and believing everything happens for a reason.”

The undrafted rookie out of North Carolina State — nicknamed “Bam” since childhood — also became the franchise's first player with 100 or more yards from scrimmage since the merger in 1970.

“Bam's been a special player probably since he was like 5 or 6 years old,” Carter said. “The talent was there. ... He's been doing really good and ballin' ever since he got here.”

Ty Johnson will also likely see more snaps if Carter is out. He had a season-high 62 yards rushing against the Bears, including a 32-yard touchdown run.

James Robinson was inactive last week as a healthy scratch, but would likely be available to help replace Carter.

Rankins' return is a huge lift for the defensive line, especially since his elbow injury appeared more serious — potentially season-ending — when it happened against Buffalo on Nov. 6.

“Everything feels good, had a good week of work and got my normal workload,” he said. “All systems are go.”

“Knock on wood, he’s been having such a nice year,” coach Robert Saleh said. “Effective pass rushing, he’s been disruptive in the run game, veteran leadership, knows how to play the game. So getting him back is always good.”

NOTES: As expected, Saleh confirmed Joe Flacco will again serve as the backup to starter Mike White on Sunday. Zach Wilson, who'll be inactive, remains the No. 3 QB after being benched last week. ... Saleh said “it's a possibility” the Jets could activate OT George Fant (knee) from the injured reserve list, especially if Ogbuehi can't play.