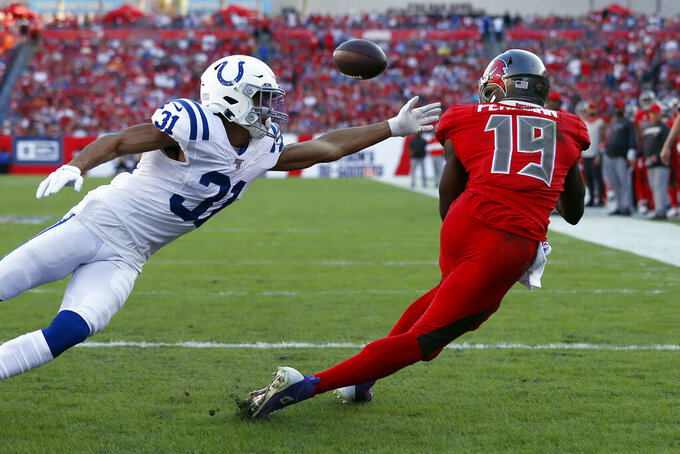 TAMPA, Fla. (AP) — The Indianapolis Colts are still searching for some of that magic they had last season during a incredible stretch run to reach the playoffs Jameis Winston threw for 456 yards and four touchdowns, helping the Tampa Bay Buccaneers hand the Colts their fifth loss in six games, 38-35 on Sunday. Indianapolis (6-7) started the season winning five of seven, but the current slide has seen the Colts fall from first place to third in the AFC South. "Obviously, we think we're a better team than that but the reality of it is that's our record," Colts quarterback Jacoby Brissett said. "We've got to do things to change that. Do the things necessary to make plays in those critical times of the game. I think we've got the right guys in the locker room to do it." The Colts overcome an 1-5 start last season by winning nine of their last 10 — including four straight in December — to earn an AFC wild-card berth.

Sunday's loss was also costly because the Colts wasted an opportunity to pick up ground in the AFC South. "A tough loss," Indianapolis coach Frank Reich said. "It hurts. We said in the locker room, we've been in a little bit of a rut not making the plays to finish games. This is a few games in a row now that we've had a lead in the second half and not able to sustain that." Brissett completed 19 of 36 passes for 251 yards, two TDs and no interceptions. Darius Leonard returned one of his two interceptions 80 yards for a second-quarter TD, and Marcus Johnson had a 46-yard scoring reception and finished with 105 yards on three catches for the Colts. All that offense with four-time Pro Bowl receiver T.Y. Hilton sitting out with a calf injury. "There were a lot of positive play out there today, the way some of our guys played, but at the end of the day what really counts is making enough plays to win the ballgame and that's what we're struggling with right now," Reich said. "The good thing about this team, there's no finger-pointing." Chase McLaughlin, filling in for injured kicker Adam Vinatieri, made field goals of 50 and 19 yards. However, a 47-yarder that would have given the Colts a 38-31 lead hit the right upright and bounced away midway through the fourth quarter.

In the end, scoring 35 points and forcing four turnovers didn't result in a victory.