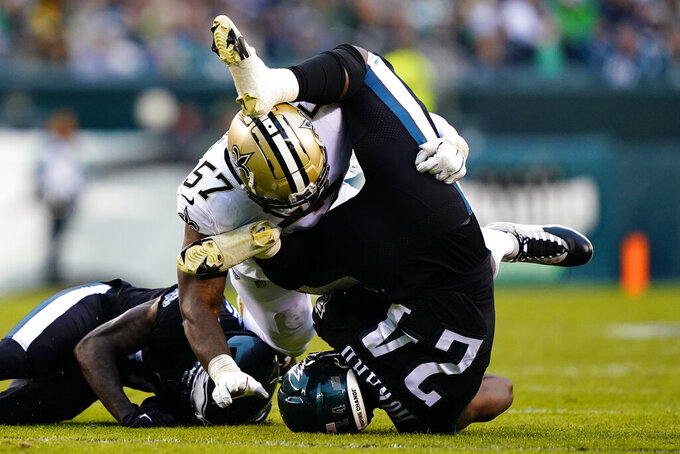 EAST RUTHERFORD, N.J. (AP) — After a 2-5 start, the Philladelphia Eagles have gotten back in the playoff race by taking a page out of the New York Giants' playbook from their heydays under Bill Parcells and Tom Coughlin.

The Eagles (5-6) are pounding the rock and putting up points, which probably will be a problem for the Giants (3-7) Sunday when the teams meet at MetLife Stadium for the first of two contests in five weeks.

While the Giants have shown the ability to stop the run at times, Joe Judge's team does not put up points. Offensive coordinator Jason Garrett was fired on Tuesday after the team was held to season lows in points, total yards and time of possession in a 30-10 loss to Tampa Bay.

The Eagles have scored 30-plus points five times this season. They have 870 yards rushing in the last four games, and have rushed for 200-plus yards in consecutive games for the first time since 1978.

“We feel like we have a strength on offense as far as upfront and there’s different ways,” Eagles coach Nick Sirianni said. “Smash-mouth football, I know that can mean like, hey, you’re just pounding it, and that’s part of it, but there’s also some other things we’re doing with some quarterback runs and this and that.”

The Giants have one of the NFL's worst offenses. In five of their seven losses they have 65 points combined, an average of 13 points.

Judge has refused to say who will call the offensive plays. He said he knows who it will be, but is not disclosing it to get a tactical edge.

The odds-on favorite is Freddie Kitchens, the former Cleveland Browns head coach who has been with the Giants for two seasons.

“I think Freddie’s done a good job in terms of using his players and creating matchups and situations where they can have success, and he calls it with a degree of multiples and variables, which present problems to opponents,” Judge said of Kitchens. “He sees it through the lens of the player in terms of creating plays.”

T.J. Edwards has helped solidify Philadelphia’s defense since taking over as the starting middle linebacker last month. He had an interception and a fumble recovery against the Saints, becoming the team’s first linebacker with two takeaways in a game since Jordan Hicks had two picks against Dallas on Jan. 1, 2017.

Edwards has 44 tackles, including three for a loss, in the last four games. The Eagles rewarded him with a one-year contract extension through 2022 earlier in the week.

The Eagles' offensive line deserves much of the credit for their turnaround.

“It starts with Lane Johnson and Jason Kelce,” Sirianni said. “Lane has been playing outstanding. He’s just so big and powerful. To me, he’s the best tackle that I’ve been around in my 12, 13 years in the NFL.

The Eagles had to make adjustments after guards Isaac Seumalo and Brandon Brooks were hurt early. It left the unit out of sync and led to penalties.

No one on the Giants seemed to take the dismissal of Garrett harder than quarterback Daniel Jones.

Jones and Garrett have worked closely the past two seasons, and the quarterback has made progress. It has not been uncommon to see the two engaged in contests after practice. It should be interesting to see how Jones does.

“I think if you don’t feel like that, there’s an issue and we all take responsibility in our lack of production," Jones said. "I certainly do. That’s what makes it tough. Like I said, it’s on all of us to perform better and to produce more.”

Maybe the Giants will get a little motivation having Hall of Famer Michael Strahan at the game to have his No. 92 jersey retired by the team.

Strahan has attended a lot of Giants games since retiring after the Super Bowl win following the 2007 regular season. While the team has had losing records the past four seasons, the former defensive lineman believes there is hope.

“I just want the team to understand that they are not far off. They’re really not far off,” said Strahan, who had 21 1/2 sacks against the Eagles. “At the same time, when you’re losing, don’t look around and blame anybody. Don’t wait for somebody to rescue you because no one feels sorry for you in this league when you’re losing.”