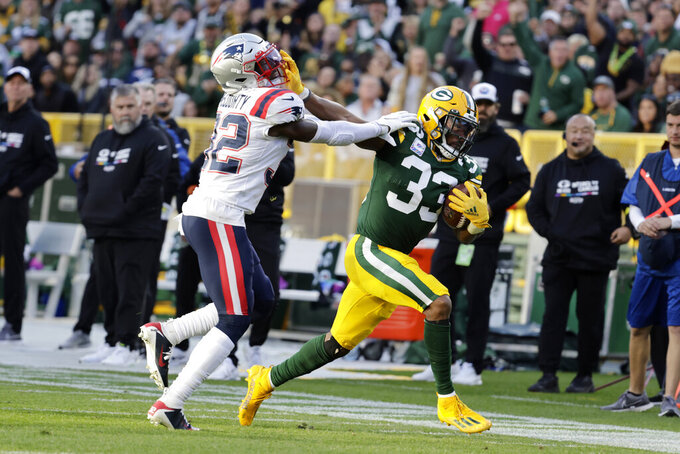 Rodgers threw two second-half touchdown passes and led an overtime drive that resulted in Mason Crosby's 31-yard field goal as time expired, lifting the Packers to a 27-24 victory on Sunday.

The dramatic finish came after Rodgers went 4 of 11 for 44 yards for an 11.2 passer rating in a first-half performance that included New England's Jack Jones scoring on a 40-yard interception return, lifting the Patriots to a 10-7 halftime lead.

“I settled in and usually don’t have two terrible halves, so I kind of returned to the form I expect from myself, and we started moving the football,” said Rodgers, who went 21 of 35 for 251 yards.

Zappe, a 2022 fourth-round pick from Western Kentucky, played the majority of the game after Brian Hoyer left with a head injury. Hoyer made his first start since 2020 in place of Mac Jones, who injured his left ankle during last weekend's 37-26 loss to Baltimore.

Hoyer led New England to Nick Folk's 37-yard field goal on the game’s opening drive, but he got sacked by Rashan Gary on the team's next series and departed.

Zappe and the Patriots (1-3) still played well enough to force overtime, but Rodgers continued his recent home mastery of AFC teams. The Packers (3-1) are 18-1 in the last 19 home games Rodgers has started against AFC foes.

“Of course, it was exciting at first," said Zappe, who went 10 of 15 for 99 yards with a touchdown. “It was a dream come true to play in an NFL game. It’s obviously not the outcome we wanted at all.”

After the Packers went three-and-out on the opening possession of overtime, Marcus Jones’ 20-yard punt return gave New England the ball at its 49-yard line. Gary said he had one thing on his mind at that point.

After the Packers forced a three-and-out and the Patriots punted, Green Bay marched 77 yards in a 12-play drive that lasted nearly seven minutes before Crosby made his winning kick.

“We get the ball there at the 10-yard line in the second possession of overtime, and it’s amazing to have no doubt that we’re going to have an (opportunity) to try to win it,” Crosby said. “Snap, hold, protection, everything was great all day. So, yeah, it’s nice to be able to finish that thing off.”

Green Bay had tied the game at 24 on Rodgers’ 13-yard touchdown pass to rookie Romeo Doubs with 6:14 remaining. They nearly connected again in the closing minutes of regulation.

With the Packers facing third-and-8 from the New England 40, Rodgers threw deep to a diving Doubs in the right corner of the end zone. Dobbs got past Jonathan Jones and caught the pass, but the ball slipped out of his hands after he landed.

New England withstood the injuries to its top two quarterbacks to lead on the road for much of the day. The Patriots were helped by their ability to contain Rodgers in the first half.

Jack Jones' touchdown with 13 seconds left in the second quarter was Rodgers' first pick-6 since Tampa Bay’s Jamel Dean scored on a 32-yard interception return in the Buccaneers' 38-10 victory on Oct. 18, 2020.

“I’ve been a great player for a long time," Rodgers said. "Not a whole lot I need to tell myself. Just play better.”

Zappe gave New England a 17-10 lead in the third quarter with a 25-yard touchdown pass to DeVante Parker. The ball appeared to get snapped after the play clock had expired on Parker's touchdown, but no penalty was called.

Then Rodgers led the Packers back again. This time, the Patriots couldn't respond.

“In the end, Rodgers is just too good," Patriots coach Bill Belichick said. “He made some throws that only he can make.”

Packers: Play an international regular-season game for the first time in franchise history when they face the New York Giants on Sunday at London’s Tottenham Hotspur Stadium.