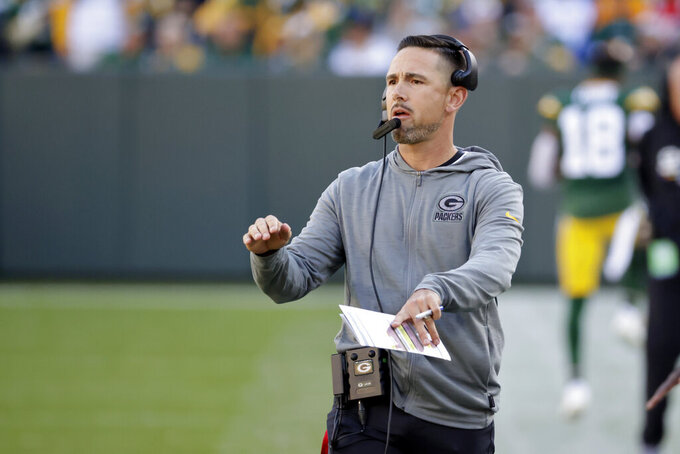 LONDON (AP) — Green Bay Packers coach Matt LaFleur has done the London trip twice before as an offensive coordinator and “didn't leave the hotel either time.”

The Packers' schedule for their first-ever international regular-season game doesn't leave much time for sightseeing. Same goes for the New York Giants (3-1). Both teams are scheduled to arrive in the British capital Friday morning ahead of Sunday's game at Tottenham Hotspur Stadium.

Rodgers, a four-time MVP, had hoped the Packers (3-1) would arrive earlier in the week “to experience a little bit of that culture” but he knows ultimately it's a business trip — a long-awaited one at that.

“For us, it's a dream," Rodgers said. “I've been talking about doing this for years, since they started this, couldn't wait to get over there, but nobody wants to give up a Green Bay Packer home game. So it's exciting to finally get a chance to go over.”

Teams are now required to play internationally on a rotating basis, made easier by the addition of a 17th game. The Packers are Sunday's home team.

Rodgers was on hand this summer when Manchester City played at Lambeau Field, where striker Erling Haaland scored on his club debut. The quarterback exchanged jerseys with City players and told Haaland to “have a great season.” So far, so good.

“I don't care nothing about London,” the first-round draft pick said. “It's a great experience to travel outside the country. But we're just trying to get a ‘W.’"

The Giants head to London with question marks at quarterback. Daniel Jones sprained his left ankle last Sunday but was showing improvement by midweek. At practice Wednesday, he wore a pair of high-top red shoes for more support.

Tyrod Taylor was in the concussion protocol after he also left Sunday's 20-12 win over the Chicago Bears. Coach Brian Daboll tasked Barkley with taking direct snaps to help close out the game.

Practice-squad quarterback Davis Webb would be the third choice.

Jones' ability to run is key to New York's success. He has 18 rushing first downs — the most among quarterbacks and tied for third-most overall through four games. The fourth-year player is the team's second leading rusher and ran for two touchdowns last Sunday.

A one-dimensional Jones would make it easier for defenses to focus exclusively on Barkley.

“I'll continue to progress throughout the week and see how I feel,” Jones said. “I'm confident in my ability to throw from the pocket, throw outside the pocket, and make plays from both.”

In each of LaFleur’s first three seasons, the Packers committed the fewest or second-fewest turnovers in the league but they’re not taking particularly good care of the ball this year.

Green Bay has turned the ball over seven times in its first four games and has a minus-3 turnover margin. It’s an issue LaFleur knows the Packers must fix as they seek a fourth consecutive victory.

“Put too many on the ground, there’s no doubt (that) once you do that, the other teams that are watching you, that are studying you, they kind of smell blood in the water,” he said. “They’re going to go after, relentlessly after that football. We know that that’s going to happen. We’ve got to step up to the challenge.”

GARY'S GOING FOR IT

If Gary gets a sack Sunday, he would tie the Packers' franchise record for consecutive games with a sack: Tim Harris had a sack in five straight games in 1989, and Kabeer Gbaja-Biamila did it in 2000-01.

Packers wide receiver Allen Lazard should feel right at home at Tottenham Hotspur Stadium thanks to his pregame routine in which he juggles a soccer ball with his feet.

“It’s helping me focus,” Lazard said. “Especially when I started, I wasn’t that talented or skilled. It required a lot more focus and just got my brain firing from that standpoint of locking in and details of how I was placing my foot to kick the ball and juggle it.”

The Giants won the first regular-season NFL game played in London when they beat the Miami Dolphins 13-10 in the mud at Wembley Stadium in 2007. Eli Manning completed 8 of 22 passes for 59 yards in the Week 8 game of their Super Bowl-winning campaign. New York then beat the Los Angeles Rams 17-10 in 2016 at Twickenham Stadium.