Roethlisberger says it was his idea to take pay cut 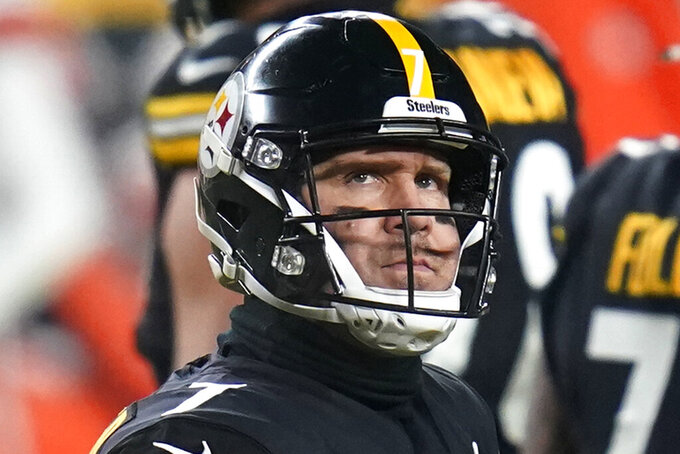 File-This Jan. 10, 2021, file photo shows Pittsburgh Steelers quarterback Ben Roethlisberger (7) looking a the scoreboard as he walks off the field during the first half of an NFL wild-card playoff football game in Pittsburgh. Roethlisberger said it was his idea to take a voluntary pay cut and help ensure his return for an 18th season. Roethlisberger spoke for the first time on Tuesday, June 1, 2021, since he agreed to a new contract in March that assured the 39-year-old would be back with the Steelers in 2021, the only NFL team he’s ever known.(AP Photo/Keith Srakocic, File)

PITTSBURGH (AP) — Pittsburgh Steelers quarterback Ben Roethlisberger said it was his idea to take a voluntary pay cut and help ensure his return for an 18th season.

Roethlisberger spoke for the first time on Tuesday since he agreed to a new contract in March that assured the 39-year-old would be back with the Steelers in 2021, the only NFL team he’s ever known.

“I told (the front office) I want to help the team out however I can,” Roethlisberger said. “I told them I would do whatever I could to help the team sign guys that are going to help us win football games.

“I knew we had a great defense and some amazing weapons on offense, so I wanted to come back and be part of what I think is a special football team. In order to do that, I felt it was necessary to (take a pay cut).”

The Steelers made no secret of the need for Roethlisberger to take a pay cut to ease some of the burden of a $41 million salary cap hit that was scheduled for 2021.

Steelers president Art Rooney II, coach Mike Tomlin and general manager Kevin Colbert all expressed the desire to bring back Roethlisberger, but they stressed the need to do it in a way that gave the team some financial flexibility.

Roethlisberger was happy to oblige.

“I’ll always bleed black and gold,” Roethlisberger said. “I didn’t want to go anywhere. I told the Rooneys and Coach Tomlin that I wanted to be here. I don’t want to be anywhere else. This is home to me. Almost half of my life has been here playing football for the Steelers. That’s why I took a pay cut to stay here and help this team because I believe in this group.”

The Steelers won their first 11 games in 2020, en route to a 12-4 record and the AFC North title. But they stumbled down the stretch, dropping five of their final six, including a home blowout loss against Cleveland in the wild-card round of the playoffs as Roethlisberger threw four interceptions in the 48-37 loss.

“I didn’t play well enough at the end of the season,” Roethlisberger said. “It’s no secret, and I’ll be the first to point the finger at myself. When the ball is in your hand every play, you have to make plays and play better football.

“I just felt like I had more in the tank and felt disappointed about the way the season ended. I wanted to let (the Steelers) know that if they wanted me back, I felt like I could give them everything I’ve got.”

The Steelers' run game finished last in the NFL in 2020, allowing defenses to tee off on Pittsburgh’s short passing game. The Steelers addressed the offense with their first four picks of this year’s draft, including Alabama standout running back Najee Harris in the first round.

“He’s a really hard worker,” Roethlisberger said of Harris. “He doesn’t seem lost, and it’s not like this is too big for him. Once he gets it, and it clicks, and he goes full speed, it’s going to be something to see.”

Pittsburgh is in the midst of an offensive overhaul.

“When you’ve had the same offense, or a similar offense, for 17 years, and all of the sudden, something looks exactly the same, but it’s called completely different, it’s a big challenge,” Roethlisberger said. “But it’s a fun new challenge.”

Roethlisberger is the franchise leader in just about every major statistical passing category. He threw for 3,803 yards with 33 touchdowns and 10 interceptions in 15 games last season after missing almost all of 2019 with a right elbow injury.

Roethlisberger, who said his arm feels “great,” is back to a normal offseason throwing program and he has participated in the first four days of the team’s voluntary organized team activities.

Roethlisberger, whose restructured contract includes voidable years, said he isn’t focused on his future as much as he remains motivated to win another Super Bowl this season.

“I’m going to approach this like I do every season, like it’s my last,” Roethlisberger said. “Every single play in the game of football could be your last ... every game could be your last. I’ve never looked toward the future. I’ve always looked toward the right here and now. I’m going to give it everything I have to win a Super Bowl this year because it’s the most important year for any of us.”