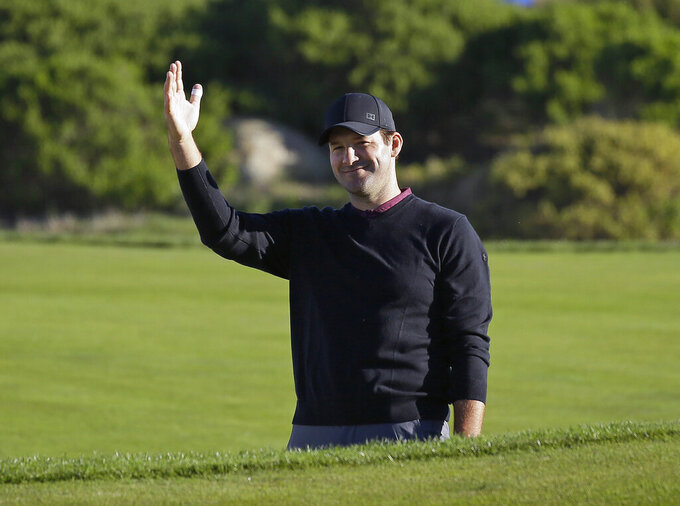 FILE - In this Feb. 9, 2018, file photo, Tony Romo waves after hitting the ball out of a bunker and close to the pin on the 11th green of the Monterey Peninsula Country Club Shore Course during the second round of the AT&T Pebble Beach National Pro-Am golf tournament, in Pebble Beach, Calif. Romo is finally in the Super Bowl. After being unable to lead Dallas to the big game, Romo will call the game for CBS in his second season in the booth. But just like Jared Goff and Tom Brady, Romo is coming in with plenty of momentum after his call of the AFC Championship game _ where he predicted many of New England's plays and tendencies _ drew universal accolades. (AP Photo/Eric Risberg, File)

New England's Tom Brady and Los Angeles' Jared Goff are going into the Super Bowl with plenty of momentum, but the quarterback that might be on the biggest roll is CBS analyst Tony Romo.

The former Cowboys signal-caller will call his first Super Bowl on Feb. 3 coming off acclaim for his analysis of the Jan. 20 AFC championship game between New England and Kansas City.

Romo made 15 predictions, according to Yahoo! Sports' Kevin Kaduk, of what the Patriots or Chiefs would do before the snap. He was correct on 12 plays, including going 10 of 12 during the fourth quarter and overtime.

Romo said during a conference call earlier this week that he intends to call the game the same way he has others for the past two seasons.

"I try not to predetermine too much stuff I can say because the game is the story and you're going to call it," Romo said. "Sometimes you just get passionate and excited in the moment, really talking out loud about what is going through your brain. Sometimes you see a lot of stuff and try to articulate that. Once in a blue moon, you get lucky."

Jim Nantz called Romo "Romo-stradamus" during the fourth quarter of the AFC championship but noted that his partner isn't a fortune teller. Instead, it is Romo's 13 seasons of preparation as quarterback of the Cowboys that has translated from the field to the booth.

"My partner had to have been in his Cowboys day and remains some sort of sick film room guru who took the time that was needed to completely solve the puzzle," Nantz said. "When you have these key moments late in the game, this is a testimony to years of his work and preparation. He is suggesting where the play should go, and it married up and was in perfect symmetry.

"We and the viewers are the beneficiaries. They are having a wonderful ride and seeing a broadcast that has tipped off plays more than ever before."

Romo's deep dive into film has many similarities to what he did when he was a player but now it takes less time. His biggest task during the week is diving into the different systems the coaches have and trying to figure out the rules they have for their teams.

"Everyone is usually under their own umbrella. Once you figure out someone's system and rules, you can figure out how far to go and how to take advantage," he said.

Nantz and Romo have called 14 Patriots games the past two years, including five this season. They have done just one Rams game, which was against Seattle earlier in the season. Even though he has not seen Los Angeles as often as New England, Romo said he wouldn't be viewing more tape than usual.

Romo said he does have to guard against getting swept up in the information overload that is a part of every Super Bowl.

"You have a lot of smart people talking a lot of things. In some ways it is great but also you can start to move down different paths or things you want to talk about," he said. "My routine is going to be pretty similar. I always watch a lot of tape and will have them down pretty good. It will be a fascinating matchup."

As Romo prepares to become the 23rd analyst to call a Super Bowl, it is hard to believe many had doubts about whether he would be successful. But he has been one of the few ex-players to make a seamless transition while earning praise for his ability and enthusiasm to translate the game for the viewer.

Nantz said Romo has been consistent since their first game together — Oakland at Tennessee in 2017. But to get to that point, Romo watched plenty of tape to find his voice.

"It is the same as throwing the football, it is getting reps and then you adjust from there," he said. "This is the natural version you are hearing. It is me watching myself and seeing what I don't like. You sit there and nitpick and start to find your voice."

Romo, the 11th QB turned analyst to do a Super Bowl, said John Madden stands out as an analyst he has always looked up to. While Madden brought in the telestrator and made football easier for the masses to understand, Romo has taken it to a new level with a generation of fans consumed by analytics and who have access to the same kind of video that coaches watch.

Network executives' efforts to find the next Romo is something that has started to gain steam the past two offseasons.

"It is hard to find someone with the ability to communicate the game like he does," Nantz said.

Nantz, who will call his sixth Super Bowl, has said his biggest advice for Romo is to enjoy Super Bowl week but to approach it the same.

"I'm excited for him. He has such an appreciation for television and old broadcast teams. I want to see him soak it all in and then we'll drop in and enjoy doing the game," he said.