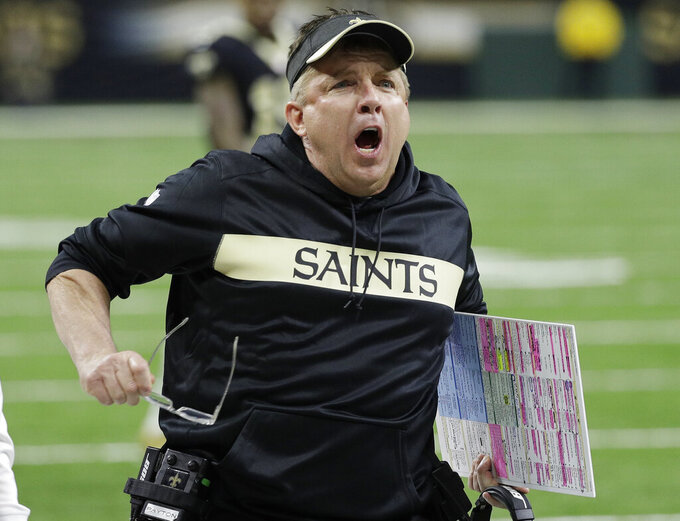 NEW ORLEANS (AP) — The Saints have no time to waste if they want to win another Super Bowl with record-setting quarterback Drew Brees under center — which is why three of their top four 2019 draft slots have already been traded away.

The Saints aren't slated to pick until late in the second round — 62nd overall — because they largely mortgaged the top of this year's draft in hopes of winning it all last season.

New Orleans traded this year's first-round pick last year in order to move up and select defensive end Marcus Davenport. The Saints gave up their 2019 third-round pick in a trade for reserve quarterback Teddy Bridgewater late in the 2018 preseason. And in the middle of last season, they exchanged this year's fourth-round pick for cornerback Eli Apple.

It nearly paid off. But less than a week after Brees turned 40, the Saints fell to the Rams in an NFC title game tainted by officials' decisions not to throw flags against Los Angeles for a hit to the head of a Saints receiver on a play that also could have been called pass interference.

Without the benefit of either call, the Saints settled for a late go-ahead field goal that left the Rams enough time to tie the game before winning in overtime.

That left New Orleans to wonder, "what if?" as the Rams fell to New England in the Super Bowl.

Yet, as bitterly as the offseason began, it has steadily become more hopeful in the early weeks of a new league year.

New Orleans has been able to keep most of its contending 2018 team together for another run at a Super Bowl. And the Saints moved quickly in free agency to add projected replacements for the few veterans who've left.

So the Saints won't have many holes to fill in this draft, but will nonetheless want to find a few rookies capable of contributing right away. Having the depth to withstand a few untimely injuries sometimes makes all the difference in a title run.

An area of immediate concern is along the interior defensive line, where 2016 first-round draft choice Sheldon Rankins is recovering from an Achilles tendon tear, David Onyemata is facing a possible suspension of up to four games for a misdemeanor marijuana citation and Tyeler Davison left in free agency.

If all goes well, Rankins and Onyemata will both be back and in form by the second month of the season, but that's no easy forecast at this point. Recovery from an Achilles tendon injury can be tricky. Davison's decision, which came less than two weeks before the draft, might be the bigger blow. He was a solid role player who started 43 games in the past three seasons. So if a desirable defensive tackle is available, expect the Saints to take a hard look. Possibilities are Dre'mont Jones of Ohio State and Gerald Willis of Miami.

The Saints sought to bolster their offensive line depth in last year's draft, selecting Florida State offensive tackle Rick Leonard and LSU interior lineman Will Clapp. But Leonard never made the active roster and ultimately was cut from the practice squad. And while the Saints have been encouraged by the development of interior lineman Cameron Tom, an undrafted rookie in 2017, they still have ample reasons to consider drafting more blockers this season. Guard Andrus Peat, a 2015 first-round draft choice, is in his last season under contract, while left tackle Terron Armstead, one of the highest-paid players on the team, has had trouble staying healthy.

Saints coach Sean Payton, who designs and calls the offense, is always on the lookout for reliable receivers — and might need another one in 2019. Beyond 2018 All-Pro Michael Thomas, the Saints have questions at the position. Cameron Meredith, a top free-agent target a year ago, struggled to come back from knee surgery in his first season in New Orleans; Tre'Quan Smith is coming off a rookie season that showed promise in sometimes magnificent bursts, but lacked consistency; and Ted Ginn Jr., who was sidelined much of last season by a knee injury, is 34 and entering his 13th season.

New Orleans cut ties with veteran safety Kurt Coleman, a top free-agent target in 2018, after one season. Payton has expressed confidence in young safeties Vonn Bell and Marcus Williams, and the Saints have brought back reserve Chris Banjo, but there is room for another player in the rotation. Meanwhile, Williams' trajectory is unclear. After a promising rookie season highlighted by four interceptions in the regular season and one in the postseason, he intercepted two passes in 2018.