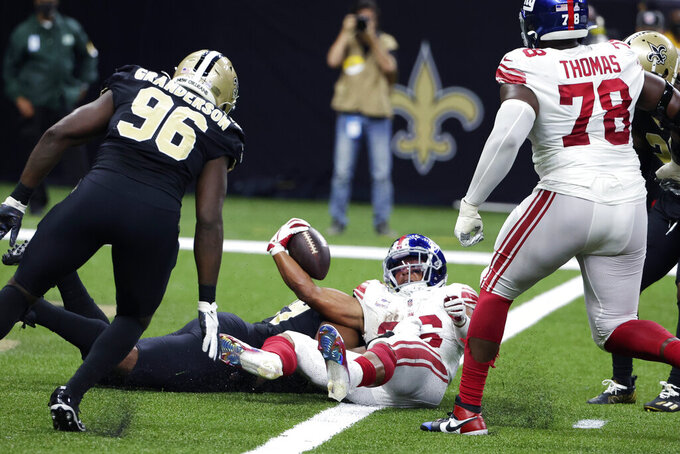 NEW ORLEANS (AP) — When Jameis Winston, Alvin Kamara and the Saints' offense broke the huddle to start a drive with nine minutes left in regulation, New Orleans looked poised to close out a victory in its first game in front of a full Superdome in more than a year.

The Saints led by two scores and needed a few more first downs to put away the previously winless New York Giants. But for the first time in eight possessions, they failed to cross midfield, punting after just three plays.

“Eleven points in the fourth quarter isn’t a big lead, and certainly with nine minutes left in the game it’s not,” Saints coach Sean Payton said after his club's 27-21 overtime loss.

Saquon Barkley scored for the Giants on the first play following the punt, getting open down the sideline and cutting back for a 54-yard touchdown catch with 6:52 left. Quarterback Daniel Jones ran in a 2-point conversion to make it 21-18.

The Giants won the overtime coin toss and marched 75 yards in nine plays for Barkley's winning 6-yard touchdown run, sending what had been a full-throated crowd home in relative silence.

The Saints moved their first home game to Jacksonville because of damage caused by Hurricane Ida, then played at Carolina and New England. They played all of last season in front a mostly empty Superdome in compliance with coronavirus protocols.

“You don’t like to lose those games,” quarterback Jameis Winston said. “That’s what we do — finish. It’s in our DNA. It feels like a blur.”

The Saints hadn't looked like a team on the brink of collapse for most of the day.

Alvin Kamara picked up 126 yards on a career-high 26 carries. Winston went 17 of 23 for 226 yards, completing 13 passes in a row from early in the second quarter to late in the fourth. The defense was on the field for only 9:32 in the first half.

But they let Jones throw for 203 of his 402 yards in the fourth quarter and overtime, including the long touchdown to Barkley as well as three more 20-plus-yard completions as the Saints began missing tackles.

“This one’s on the defense,” Jenkins said. “We’ve got to play better in order for our team to have success.”

Barkley rushed for 52 yards on 13 carries but also had five catches for 74 yards.

“He’s tough to get down,” Jenkins said. “He’s their best player. We need to stop him and didn’t get that done.”

The Saints also regretted decisions that prevented them from widening their lead.

One play after a 46-yard touchdown pass from Winston to Kenny Stills was wiped out by a holding call on tight end Adam Trautman, Taysom Hill replaced Winston at quarterback and threw an interception.

Hill's pass was intended for 5-foot-6 Deonte Harris, but it hung in the air, leaving the diminutive receiver overmatched for what was essentially a jump ball against 6-1 defensive back James Bradberry.

Payton also sent out struggling kicker Aldrick Rosas, who is filling in for the injured Wil Lutz, to try a 58-yard field goal in the second quarter. It went wide right, and Jones hit John Ross for a 52-yard touchdown on the next play.

Rosas' miss came a week after he was off the mark from 52 and 36 yards in a victory at New England.

“Looking at it again, I regret kicking instead of punting,” Payton said. “But at some point, we’re going to have to kick one between the uprights.”