Saints' Payton critical of how Thomas' injury was handled 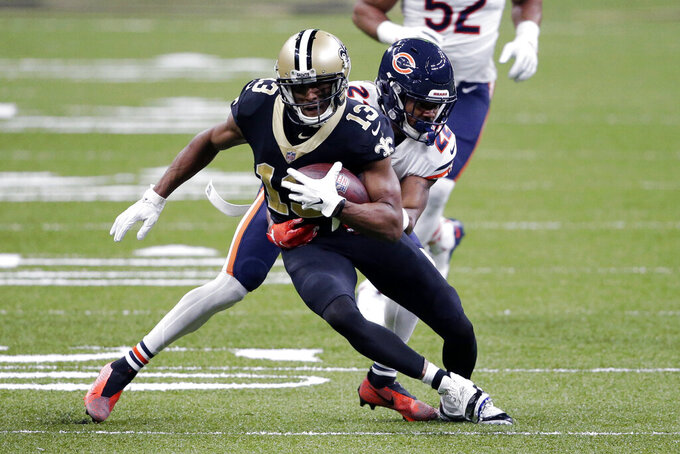 FILE - In this Sunday, Jan. 10, 2021 file photo, New Orleans Saints wide receiver Michael Thomas (13) carries against Chicago Bears cornerback Kindle Vildor (22) in the first half of an NFL wild-card playoff football game in New Orleans. Saints coach Sean Payton says Michael Thomas' ankle surgery should have been performed earlier than in June and apparently will force the Saints to play some games without the star receiver. But Payton is declining to assign blame for delays in Thomas' return to the field. Payton spoke Wednesday July 28, 2021 during his traditional interview session on the eve of the first practice of training camp.(AP Photo/Butch Dill, File)

METAIRIE, La. (AP) — Saints coach Sean Payton expressed annoyance at the timing of a surgical procedure that could sideline star Michael Thomas through the opening of the regular season.

He stopped short of assigning blame, however.

“It appears we’re going to have to spend some time without him. It’s disappointing,” Payton said Wednesday during his traditional interview session on the eve of the first practice of training camp. “We would have liked that to have happened earlier than later, and quite honestly, it should have. ... I’m going to leave it at that.”

Thomas, who set an NFL record in 2019 with 149 catches, had surgery in June to address a high ankle sprain that sidelined him for much of last season. He had just 40 catches without a touchdown in six regular-season contests in 2020, followed by five catches and one TD in two playoff games.

And his absence could be a considerable detriment to an offense that now must learn function permanently without record-setting passer Drew Brees, who retired this year after 20 NFL seasons, the past 15 in New Orleans.

Thomas has been placed on the club’s physically unable to perform list, which mean he will not occupy an active roster spot for the time being. If he is not taken off the PUP list by opening week, he’ll have to miss at least the first six weeks of the regular season.

Thomas has not publicly addressed what led him to put off surgery until June, but general manager Mickey Loomis indicated that both the club and player initially hoped the receiver’s injury could heal without surgery.

“It was decided that he was going to treat that conservatively and I think we all had the expectation that it would heal and he’d be fine coming into camp this year, but we get to the minicamp (in June) and obviously it wasn’t quite right,” Loomis said. “Collectively, we made the call to have surgery in June. With hindsight, we would have preferred that surgery to be earlier, in February or March, but it wasn’t. ... Hopefully, he’s had a good result so far and hopefully we’ll get him back sooner than later.”

Adjusting to Thomas’ absence is among a number of challenges facing the Saints in 2021, and despite the intrigue surrounding it, might not be the one of greatest concern.

Payton expressed confidence in the club’s receiver corps, which he said will be bolstered by the signing of nine-year veteran Chris Hogan, best known for his contributions to the 2016 and 2018 New England Patriots championships.

“We’ve got a number of guys that have played quite a bit,” Payton said, referring to Tre’Quan Smith, Deonte Harris and Marquez Callaway, among others. “There’s other pressing positions ahead of that position.”

Payton sounded more concerned about who’ll play cornerback. Top starter Marshon Lattimore should be available for most of the season, but it remains unclear how he’ll be disciplined by the NFL for his offseason arrest on gun possession charges. A suspension is possible.

“There’s still a player there that we need to find” at cornerback, Payton said, calling it something that “must” get resolved during camp.

New Orleans this week signed defensive back Brian Poole, but Payton noted that Poole has been primarily a slot player during his career and that it wasn’t clear if he’ll be the answer out wide.

And there is competition between Jameis Winston and Taysom Hill to succeed Brees. Hill went 3-1 while filling as starter when Brees was injured last season.

But if Winston can demonstrate he’s ready to start again for the first time since 2019 with Tampa Bay, that could allow Payton to continue employing Hill in ways that take advantage of his dynamism as a change-of-pace option threat, a part-time tight and special teams player.

Because the quarterbacks are different stylistically, Payton said he will have to evaluate them based on different kinds of plays that suit their strengths — something he didn’t have to worry about when Brees was around.

“Our job is to give them opportunities to do things that they are comfortable with and that they do well,” Payton said. “That becomes a little bit of the uniqueness in this offseason.”

As for the vaccination rate across the roster, Loomis said the news was encouraging, if not ideal. About 90% of Saints players either have been or are in the process of being vaccinated, “which is a real good number,” Loomis said. “Hopefully, we’ll get to 100% at some point.”