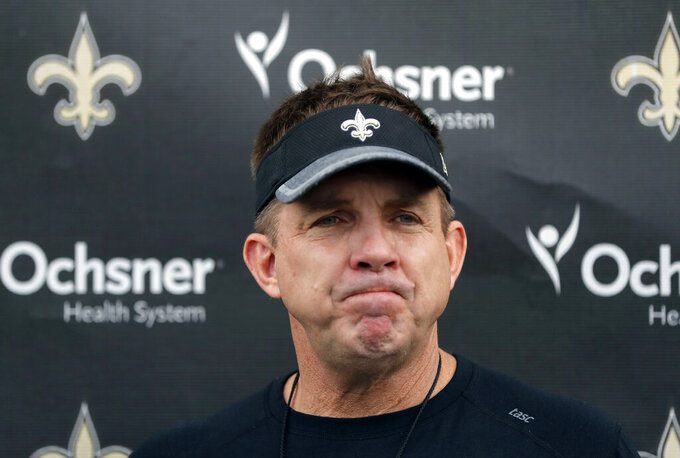 Payton was finally ready on Wednesday to stand in front of reporters for his NFL-mandated, end-of-season media availability, some 10 days after New Orleans' 26-23 overtime loss in an NFC championship game marred by one of the most glaring officiating errors in NFL history — the non-call of pass interference and helmet-to-helmet contact penalties committed by a Los Angeles Rams defensive back late in the fourth quarter.

"I would say, honestly, after the game for two to three days, much like normal people, I sat and probably didn't come out of my room, ate Jeni's ice cream and watched Netflix," Payton said. "There's certain vices you gravitate to. For me, it's probably sugar.

"I don't know that you ever really get over it, but you do get past it," Payton added. "This time away is healthy."

Payton said he probably would watch this Sunday's Super Bowl between the Rams and New England Patriots because it's what people in his profession do.

Payton also said he'd received countless phone calls, emails and text messages of support since the game, including a call from Raiders coach Jon Gruden, who was able to relate with Payton on some level. Gruden was coaching Oakland in the 2001-02 playoffs, when an apparent lost fumble by New England's Tom Brady was infamously ruled an incomplete pass on video review. The overturned call allowed New England to tie the game late and eventually win en route to the franchise's first Super Bowl triumph.

But there was only so much Gruden or anyone else could do or say to console the Saints' coach.

"There aren't too many people you can call that would be able to reflect on a situation like that," Payton said. "You hang up the phone and the news is still what it was before you called though."

Had the penalty been called on the Rams' Nickell Robey-Coleman for hitting receiver Tommylee Lewis in the helmet before Drew Brees' third-down pass arrived, the Saints could have run the clock down to the final seconds before attempting a go-ahead field goal. Instead, the Saints kicked with 1:45 to go, leaving the Rams time to drive for a tying field goal.

Payton sits on the NFL's competition committee, which reviews proposed rule changes. Currently, penalties, or missed penalties, cannot be reviewed by video replay, but whether they should be is all but certain to be discussed this offseason.

"If you look throughout the history of our game — the forward fumble by the Raiders (in 1978, known as the 'Holly Roller') — there's been these events that at times potentially change rules," Payton said. "I like the fact that I'm part of that committee and every offseason we all sit down and really try to grind on how to make this game better, safer and then present it to ownership and the other coaches.

"Certainly there'll be topics like this that'll be brought up," Payton continued. "The solution is the more challenging thing that we're all looking for."

Payton did not offer any specific proposals, but said advancements in technology should figure into officiating in general.

In New Orleans, Saints fans have responded to the missed call with everything from lawsuits filed on behalf of ticket holders to proposals for a Saints-themed Mardi Gras-style parade at the same time as the Super Bowl. Area politicians have written letters of protest to NFL Commissioner Roger Goodell.

Payton said he hadn't closely followed fans' and politicians' manifestations, but said he hoped they would eventually move on the same way he is trying to do.

"It's not going to happen overnight and it will take a little bit of time, obviously," Payton said. "But it's why we like this game. Football is like life. It's not always going to be how you planned it. It's not always going to be fair. And sometimes you get punched and you get up, and there's that toughness and grit element that's involved with this game that I think fascinates us all with it."