Saints sunken by 'flat' half and play call Payton wants back 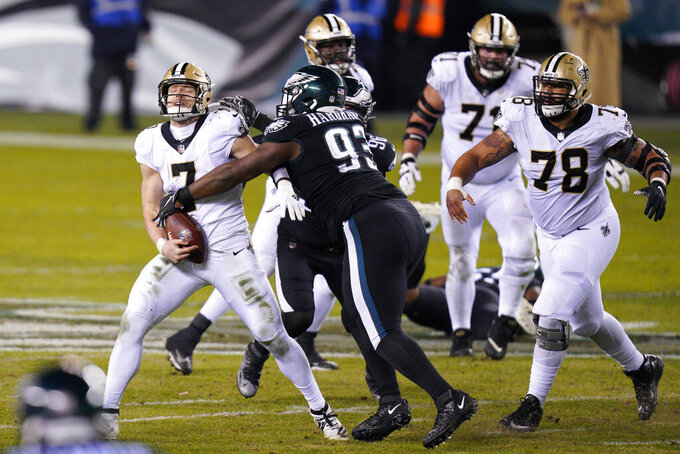 When the Saints needed 2 yards on fourth down to extend a fourth-quarter drive and potentially take the lead, coach Sean Payton went for broke.

Quarterback Taysom Hill rolled right looking downfield, far beyond the short yardage New Orleans needed. He was caught from behind by Eagles defensive end Josh Sweat, ending what until then had looked like a promising possession across midfield.

“It was more of an aggressive call by me. A shot play,” Payton said. “And it’s one of those where I’ll want that back relative to the timing in the game. We had the momentum.”

After that, the Saints' momentum was gone. Soon after, so was their winning streak, which ended at nine games. Also gone was their hold on the top spot in the NFC.

It was a stunning result considering how well New Orleans had played since October, and how much the Eagles had struggled in losing their four previous games.

But that failed fourth down was merely one of many regrets the Saints had on Sunday. Payton said the Saints “were flat” in a first half in which they fell into a 17-0 hole that they couldn't quite overcome in a 24-21 loss.

“We should have played better in the first half. And I’ve got to take some blame for that as a quarterback,” said Hill, who fell to 3-1 as a fill-in starter for the injured Drew Brees. “This one does sting a little bit because we knew what was at stake and we worked really hard to put ourselves in a situation to be in the driver’s seat where we could control our own destiny.”

The loss dropped the Saints (10-3) behind Green Bay (10-3) by virtue of the fact that the Packers won their head-to-head meeting in Week 3, which also happened to be the last time the Saints lost before their trip to Philadelphia in Week 14.

Now New Orleans must finish one game better than Green Bay during both clubs' final three games to earn a first-round playoff bye – now given only to the top seed in each conference under the NFL’s new 14-team playoff format.

“The biggest thing is we didn’t execute early, so it’s hard to generate energy. It’s hard to generate momentum when you’re not playing well and that leads to looking flat," Saints safety Malcolm Jenkins said. "For us, it’s just homing in on the details. Make sure everybody does their job, not trying to do too much and then make the plays that come to you without forcing. We got to that later, but obviously, a little bit too late.

“Obviously frustrating, but for us, our goals are very much still alive,” Jenkins added. “It’s really about making sure that we make the corrections and show up better next week.”

Containing Chiefs QB Patrick Mahomes and Co. will be a struggle for the Saints if they look as uncharacteristically porous and undisciplined on defense as they did against Eagles rookie Jalen Hurts and Philadelphia’s running game.

The Saints had not allowed a 100-yard rusher in 55 games when they arrived in Philadelphia. Then the Eagles had two. Hurts rushed for 102 yards. Running back Miles Sanders rushed for 126 yards, highlighted by his 82-yard touchdown run when the Saints were trying to keep their deficit at 10 with less than two minutes to go in the half.

“Next week, we have to tighten up. That first half we let some big runs go, something that we haven’t seen the last couple years,” Jordan added. “We dug a hole for ourselves and that can’t happen.”