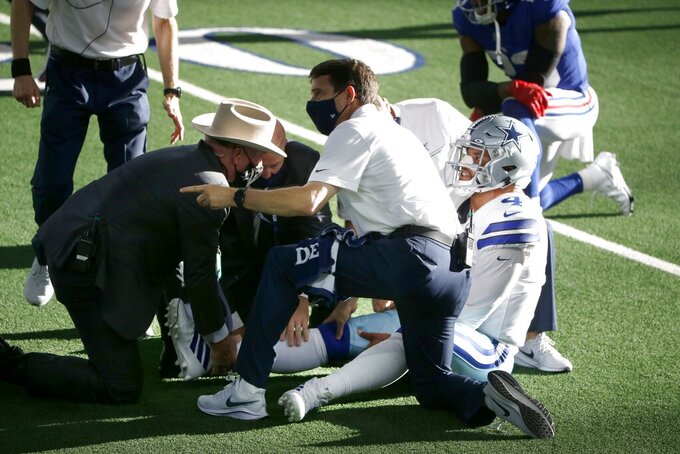 ARLINGTON, Texas (AP) — Dak Prescott's brother wasted little time trying to show the upbeat side of the Dallas quarterback in a hospital bed after a gruesome ankle injury that ended his season Sunday.

A masked Tad Prescott posted a selfie on Twitter with a smiling Prescott in a hospital bed behind him, writing that the two-time Pro Bowler would be back “STRONGER than ever” and using an expletive for emphasis.

The rush of well wishes on social media was even faster during what ended up being a 37-34 victory for the Cowboys over the winless New York Giants. Former Dallas quarterback and Pro Football Hall of Famer Troy Aikman and reigning Super Bowl MVP Patrick Mahomes of Kansas City were among them.

Prescott was going down in the arms of New York defensive back Logan Ryan at the end of a 9-yard run in the third quarter when the Dallas quarterback’s lower right leg got caught under Ryan and appeared to snap.

The team said Prescott had a fracture dislocation of the right ankle and was taken to a hospital, where surgery was planned later in the day. Prescott started the first 69 games of his career, from the beginning of his rookie season.

Tony Romo, who was the 10-year Dallas starter when he lost his job to Prescott after injuring his back in the 2016 preseason, was calling the game on CBS with Jim Nantz.

“That does not look good, Jim,” Romo said.

It wasn't any easier for his teammates, with many of them looking distraught as Prescott was being treated.

Andy Dalton, the starter for nine seasons in Cincinnati before signing as Prescott's backup after the Bengals drafted Joe Burrow No. 1 overall, led a drive to Greg Zuerlein's winning 34-yard field goal on the final play.

Prescott entered the game leading the NFL in yards passing after becoming the first to throw for at least 450 yards in three consecutive games.

Former Washington quarterback Joe Theismann weighed in with “feel so bad for Dak” after breaking his leg when he was sacked by New York's Lawrence Taylor in a Monday night game in 1985. That highlight still resonates 35 years later.

Owner Jerry Jones, whose usual routine of talking to reporters after every game has been interrupted by the pandemic, put out a statement about the quarterback who hasn't gotten the long-term contract he sought and was playing this season on the one-year, $31 million franchise tag.

“We are all heartbroken for Dak and this very disappointing injury,” Jones said. “The outpouring of messages that I have received regarding his setback speaks volumes to the respect and admiration that he has earned from his teammates, former Cowboys players and Cowboys supporters everywhere.”

The question of his contract — and whether the Cowboys use the franchise tag again rather than give him a long-term deal likely to be worth at least $160 million — will loom large in the offseason.

“I know of no one who is more prepared, from the perspective of mental and emotional toughness and determination, than Dak Prescott to respond and recover from this challenge that has been put in front of him,” Jones said. “We have no doubt that he will return to the position of leadership and purpose that he brings to our team.”

Prescott's contract situation wasn't lost on Ryan, who broke his leg late in the 2018 season two years and tried to stress it was a routine play with no ill intent.

“I’m in a similar position, he’s scratching and clawing, one year on his deal, try to get rewarded, try to do the right thing, try to show up for work, try to lead his team, try to get a lucrative contract, and had to come out and prove it this year,” Ryan said. “I hope he gets $500 million when he comes back. He deserves it.”