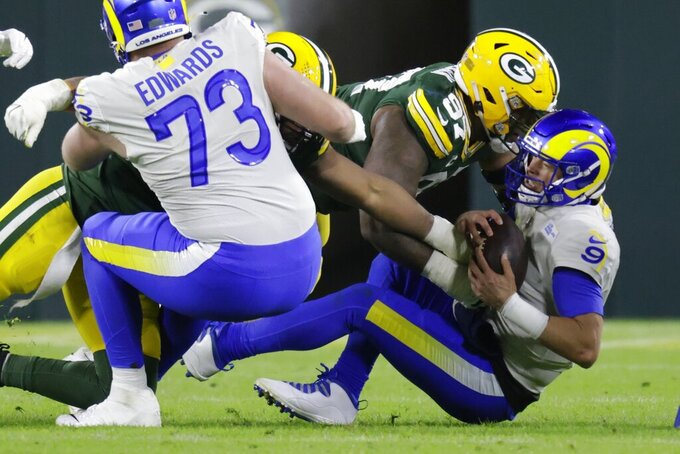 One of them has helped lead to the other.

Stafford threw a pick-6 and had a fumble that led to a Green Bay touchdown Sunday as the Rams fell 36-28 to the Packers for their third consecutive loss. In each of those three defeats, Stafford has thrown an interception that was returned for a touchdown.

“I’m going to do everything I can to be as good as I possibly can with the football while still trying to be efficient and explosive, and doing all the things that we want to do as an offense,” Stafford said. “Can’t do that if we don’t have the ball.”

Stafford showcased his explosiveness as the Rams (7-4) tried rallying from a 19-point, second-half deficit. He went 21 of 38 for 302 yards with three touchdowns, including a 54-yarder to Odell Beckham Jr. that sparked the Rams’ comeback attempt.

His big-play ability emphasizes why the Rams acquired the former Detroit Lions quarterback as they looked to take the next step after their 2020 season ended with an NFC divisional playoff loss at Green Bay.

But he also had two critical turnovers.

Late in the first quarter, Rashan Gary sacked Stafford and hit the quarterback’s elbow to knock the ball loose. Preston Smith recovered the fumble to give Green Bay first-and-goal at the 6, setting up Aaron Rodgers’ 1-yard touchdown run that opened the scoring and put the Packers ahead for good.

The Rams trailed 30-17 when Stafford tried throwing a pass to NFL receiving leader Cooper Kupp. Rasul Douglas stepped in front of Kupp and scored on a 33-yard interception return to extend Green Bay’s lead to 36-17 late in the third quarter.

That continued a distressingly familiar pattern for Stafford.

The Rams’ three-game skid started with a 28-16 loss to Tennessee that featured Kevin Byard scoring for the Titans on a 24-yard interception return. It continued when the 49ers’ Jimmie Ward scored on a 27-yard pickoff return in the Rams’ 31-10 setback at San Francisco.

“I’ve had some tough stretches in my career,” Stafford said. “There’s no question, you play this game long enough it will humble you. And I put a lot of hard work into this as all the guys in that locker room, as do all of our coaches. Is it disappointing when you come out and play like that? Absolutely. There were some good things, but too many bad things for us to have a chance to beat a good team like Green Bay.”

Green Bay (9-3) scored 16 points off three Rams turnovers. Rams coach Sean McVay discussed the importance of stopping these “self-inflicted wounds” as they attempt to recapture their early-season form, but he also noted Stafford isn’t solely to blame for his recent turnovers.

“There’s a narrative behind every single one of them,” McVay said. “I thought he did a lot of really good things today.”

The Rams’ offseason acquisition of Stafford was just one of many big-name moves the team made in its bid for a Super Bowl. The push has continued over the last month with the additions of Beckham and outside linebacker Von Miller.

But after starting the season with so much promise, the Rams now find themselves two games behind the Arizona Cardinals (9-2) in the NFC West standings. The Rams have a chance to end this slide next week when they host the lowly Jacksonville Jaguars (2-9).

Stafford knows the Rams’ chances to bounce back depend in part on how well he takes care of the football.

“They don’t stop the season right now,” Stafford said. “There’s a lot of ball left, and a lot of things can happen.”