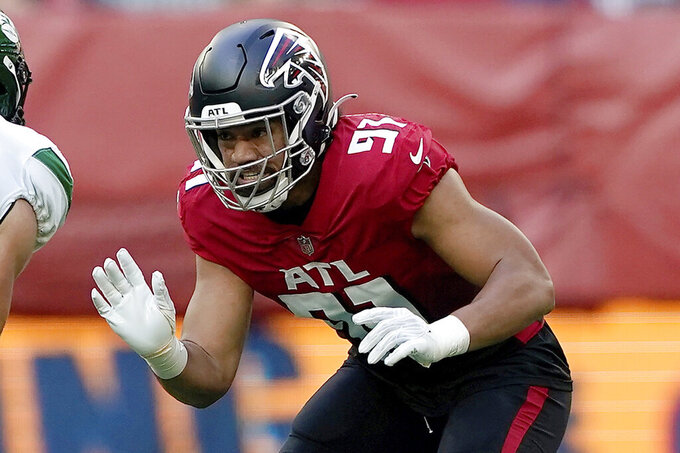 The Pittsburgh Steelers signed Tuioti-Mariner to the practice squad on Thursday, two days after he was released by the Falcons in a surprise move.

Tuioti-Mariner shared the team lead with two sacks and had nine tackles this season for Atlanta, though he was inactive for each of the Falcons' past two games before being cut.

The Falcons initially signed Tuioti-Mariner as an undrafted rookie free agent defensive tackle in 2018. He spent nearly 1 1/2 seasons on the practice squad before being promoted to the 53-man roster midway through the 2019 season. His three fumble recoveries in 2020 tied for sixth most in the NFL. He also had 31 tackles and one sack in 16 games a year ago.

Atlanta moved Tuioti-Mariner from defensive tackle to outside linebacker for the 2021 season.

The Steelers have been active this season when it comes to scouring the waiver wire for linebacker help. They grabbed Taco Charlton in September and promoted him to the 53-man roster two weeks ago.

Pittsburgh signed former Denver linebacker Derrek Tuszka to the practice squad on Sept. 1 and he made his way onto the active roster within a month.

Pittsburgh (5-3) has won four straight heading into a visit from winless Detroit (0-8) on Sunday.

The Steelers are relatively healthy while working on a short week following a 29-27 victory over Chicago on Monday night.

Wide receiver Chase Claypool's status is in doubt while he deals with a toe injury. Claypool did not practice on Thursday.

Quarterback Ben Roethlisberger was given the day off to address left pectoral, hip and right shoulder issues.

Tight end Eric Ebron did practice on Thursday and is likely to return after missing each of the past two games with a hamstring injury.