Steratore back at Super Bowl, this time as CBS analyst 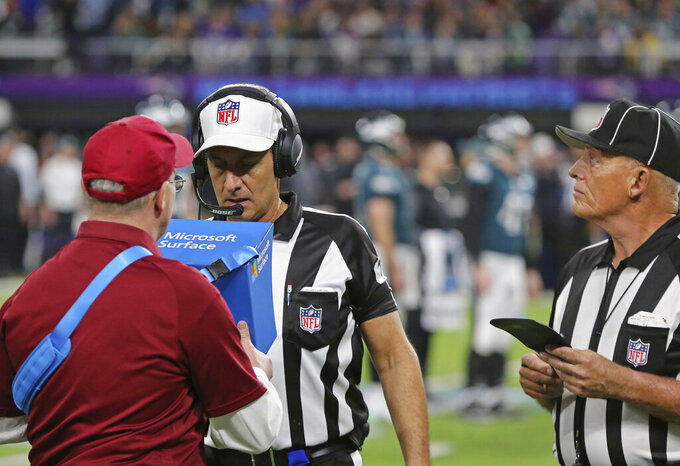 FILE - In this Feb. 4, 2018, file photo, official Gene Steratore views a replay to confirm a Corey Clement touchdown during NFL football Super Bowl 52 between the Philadelphia Eagles and the New England Patriots in Minneapolis. Last year Steratore was preparing to be the referee for the Super Bowl. Steratore will be at the Super Bowl for the second straight year but this time he will be in the booth for CBS as its rules analyst. Steratore has transitioned well from the field to the booth in his first season and has done a good job conveying rules interpretations amid a season where there have been plenty of controversial calls, including in both of last weekend's championship games.(AP Photo/Gregory Payan, File)

Gene Steratore is heading to the Super Bowl for the second straight season, this time in a very different capacity.

Steratore wraps up his first year as CBS rules analyst at Super Bowl 53 in Atlanta on Feb. 3. He will be in the booth with Jim Nantz and Tony Romo whenever a replay decision or officiating call needs interpretation as the Los Angeles Rams face the New England Patriots.

CBS hired Steratore last summer when he retired after a 35-year career as a football and basketball official. He had been an NFL official since 2003 and was a referee for 12 years. His final assignment was last year's Super Bowl between New England and Philadelphia.

"I'm maybe a little more nervous about this game. It's good, nervous energy because there's the lack of 35 years of experience (in television)," Steratore said in a phone interview.

Steratore was in the network's New York studio on Sundays during the regular season, but he did work the Chicago-Detroit Thanksgiving game in the booth to get used to working with Nantz and Romo. He has been part of the crew throughout the playoffs.

He acknowledged he had a learning curve at the beginning of the season but has gained confidence throughout the year.

"He has a lot of natural ability to articulate what we need in a short window. I've been able to carry on a conversation with him as if we've been doing this for years," Nantz said. "The way the rules are these days I can't imagine operating your show without someone."

Viewers of last Sunday's AFC championship game between New England and Kansas City didn't hear much from Steratore during the first three quarters, but there was a period during the fourth quarter when Steratore was offering more analysis than Romo.

Julian Edelman's apparent fumble of a Kansas City punt was reversed because there was no clear evidence that he touched it. Chiefs receiver Sammy Watkins also had a reception nullified when replay showed the ball hit the ground when he was unable to maintain clear possession.

A catch by the Patriots' Chris Hogan was upheld even though one angle showed he wasn't able to maintain possession before it hit the ground. There was also a roughing-the-passer penalty against Kansas City defensive lineman Chris Jones that Steratore thought was the wrong call.

"We had about a 15-minute period where it was the Gene Steratore show," CBS producer Jim Rikhoff said. "He has fit in perfectly with what we have done. He has a natural chemistry with Jim and Tony, and I am sure he will do a great job next week."

Steratore is also hoping the Super Bowl won't have the controversy that marred the two conference championship games. The non-pass interference against Rams cornerback Nickell Robey-Coleman in the NFC championship game against New Orleans has continued to resonate.

"It's an egregious mistake in that it is a foul. We don't need to dwell more on the fact since coaches, players and officials all understand the magnitude," Steratore said of the call. "I know the officials agree and admit that it was a mistake.

"What I hope to always remember is how hard and fast this game is when you get between the lines. You probably are never going to work a perfect game."

Steratore has been at the center of controversial calls over the years. He was the referee in 2010 for the Calvin Johnson touchdown that was overturned and made "process of the catch" part of the NFL lexicon.

Five years later in the NFC divisional round, Dez Bryant's catch was overturned when it was determined he didn't hold the ball throughout the process of going to the ground. Last year, the NFL's competition committee simplified the catch rules.

Steratore thinks the league has done a better job of defining the catch and making it easier to define possession. When it comes to other matters, he admits the job of officials continues to get more difficult, especially at a time when many veteran officials such as Steratore are retiring.

"It was going to be a tall task this year with four referees leaving, implementing the helmet-to-helmet rule and a couple of other rules that were points of emphasis," he said. "The game gets harder every year. We dwell on the major mistakes made year in and year out, but I don't know if this year was worse than years past."

The calls from the championship games also showed why each network has a former referee working games. Steratore was hired after CBS didn't have one for two seasons. Rikhoff said with networks going to commercials during replay reviews, that gives Steratore more time to review the play, look for the right angles, then be able to form an opinion.

Football wasn't the only sport CBS hired Steratore for. He will also be a part of the CBS coverage of the NCAA basketball tournament. Steratore's hope for the Super Bowl, though, is that he won't need to be used that often.

"Being in Atlanta for the week and watching what happens, the excitement is tremendous," he said. "I think with all of this not only an official but as a fan of the game, we want the players and coaches to decide it."