Tannehill, Titans beat up by sack-happy Jets in OT loss 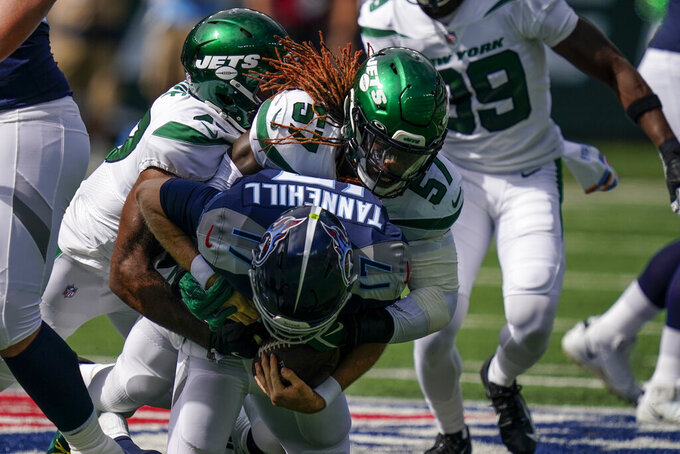 EAST RUTHERFORD, N.J. (AP) — It seemed just about every time Ryan Tannehill dropped back to throw, there was another New York Jets defender in his face.

“You never anticipate that,” Tannehill said. "Obviously coming in, we had a ton of respect for this front, the way they played on tape showed up, the way they push the pocket and get after the passer. We knew it was going to be a physical, tough game up front.

“But you never go into a game thinking you’re going to take a bunch of hits.”

Quinnen Williams had two of the sacks for the Jets, who had 14 quarterback hits overall and took Tannehill down five times on third down to blow up drives. Tennessee went 5 of 19 on third-down opportunities while dropping to 2-2.

“It’s tough to pinpoint one area or one group,” Tannehill said. “It’s been one thing here, one thing there. A bad snap, missed opportunity, bad throw, drop. It’s been everything. We have to be able as a group to clean those things up, come together and all execute and make plays.”

The offense was already short-handed entering this one with Tannehill's top two wide receivers — Julio Jones and A.J. Brown — both sidelined with hamstring injuries.

But the Titans' offensive line also got banged up throughout this one, causing an almost revolving door of big guys up front.

Center Ben Jones left briefly after injuring a shoulder on Tennessee's first possession. Left guard Rodger Saffold went out early in the fourth quarter to be evaluated for a concussion and didn't return. Left tackle Taylor Lewan was out for some time in the fourth quarter with an injured left leg before returning.

“Hopefully we can get back on the right track and get back to work and get healthy,” coach Mike Vrabel said. “We’re pretty beat up. There were about 10 trips out there, so we’ll see where we are health wise.”

Despite the constant pressure, missed opportunities and injuries, the Titans had their chances against the Jets. They got inside the 20-yard line on each of their first three possessions, but had to settle for field goals of 44, 46 and 36 yards by Randy Bullock.

“We’ve got to be better,” said Derrick Henry, who ran for 157 yards and a touchdown on 33 carries. “We’ve got to get points when we get down in the red zone. We need touchdowns.”

Tennessee finished 2 of 5 inside the 20-yard line.

“It wasn’t like we didn’t move the ball," Vrabel said. "We just weren’t able to finish drives early in the game and kept them in it. We kicked three field goals and gave up big plays on defense. We gave them a reason to go out there and play. Give them credit.”

The Titans nearly overcame all of that, though, with some late-game big plays on offense — and a good stop by the defense.

The Jets held a 24-17 lead and were trying to run out the clock late in regulation, with Michael Carter getting to the New York 40 on a 13-yard run. After Tennessee used its second timeout, the Titans held Carter to no gain on a run — and called their third timeout — and Braxton Berrios to no gain on a catch. On third down, Zach Wilson threw incomplete to Corey Davis, forcing New York to punt.

Tennessee got the ball with 2:09 left, and Tannehill & Co. went to work. After a pass interference call on Jarrod Wilson on fourth-and-10 from the Titans 26, Tannehill tossed passes of 12 and 11 yards to Josh Reynolds, 6 to Nick Westbrook-Ikhine and 6 to Anthony Firkser to get to the 2.

After an incompletion, Tannehill found a wide-open Cameron Batson in the end zone for a tying 2-yard touchdown with 16 seconds remaining in regulation.

The Titans were moving the ball again in overtime after Matt Ammendola's field goal gave the Jets the lead. But New York's defense stiffened one last time.

A delay of game penalty sandwiched by two incompletions put the game on the foot of Bullock, whose attempt sailed wide left and left the Titans with a frustrating overtime loss.

“We battled back,” Tannehill said. “Proud of the way we battled through. Defense made a big stop in overtime. Got us the ball back, gave us a chance. We didn’t execute well enough in field-goal range.”