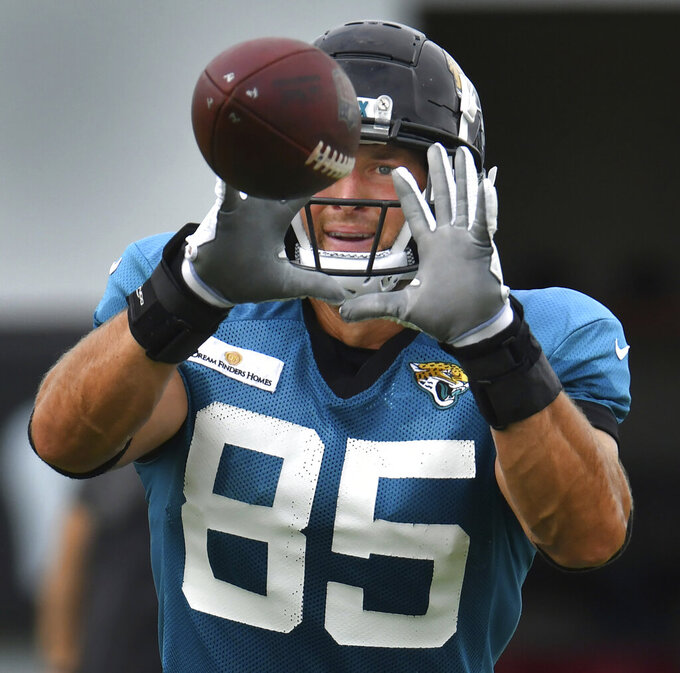 The Jacksonville Jaguars waived Tebow on Tuesday, parting with the 2007 Heisman Trophy winner who switched from quarterback to tight end in hopes of rejuvenating his pro football career.

“We knew that was an uphill battle for Tim,” said coach Urban Meyer, who recruited Tebow to nearby Florida. “Players loved him, locker room loved him, but it was the right thing (to do)."

Tebow's blocking ranged from awkward to awful in Jacksonville's preseason opener against Cleveland on his 34th birthday. The polarizing player went viral for two botched attempts on the opening drive of the third quarter Saturday night, the second one more egregious than the first.

“He has a bunch of good plays but can’t have a bad play at that position,” said Meyer, who spoke to Tebow about the roster decision Monday night and again Tuesday morning.

Tebow also failed to record a catch against the Browns and got no snaps on special teams. Meyer said Tebow's play lacked consistency, especially in tackling. And if Tebow were going to make Jacksonville's 53-man roster, he needed to be a special teams contributor.

Meyer said he expects this to be the end of Tebow's playing career.

“I would guess it is,” Meyer said. "We didn't get that deep with it. Obviously he's his own man, elite warrior, elite competitor. But he's also 34 years old.”

Tebow was shielded from the media circus that followed him during other NFL stops and never publicly addressed his return after nearly six years away from the game. The Jacksonville native responded on Twitter and thanked his hometown team for a chance.

“Thankful for the highs and even the lows, the opportunities, and the setbacks,” Tebow wrote. “I’ve never wanted to make decisions out of fear of failure and I’m grateful for the chance to have pursued a dream.”

Tebow opened training camp as Jacksonville’s fourth- or fifth-string tight end after switching positions this year. He was trying to return to the NFL after spending the previous five years in the New York Mets’ organization. He hit .223 with 18 home runs and 107 RBIs while never making it to the big leagues.

He asked Meyer for a tryout after retiring from baseball in January. Meyer obliged and ended up giving him a one-year contract worth $920,000, the minimum for a player with three accrued NFL seasons. The low-risk deal included no guaranteed money, so Tebow had to make the team to earn a dime.

Former and current NFL players criticized Meyer for giving Tebow a roster spot and pointed out a number of more deserving tight ends on the street. But many of Tebow's teammates welcomed him with open arms.

“It’s still so cool,” said quarterback Gardner Minshew, who wears No. 15 because he grew up idolizing Tebow. "I mean, every time I throw to him, I just smile. That’s like my favorite thing. But it’s like, it’s unbelievable. You hear bigger-than-life stories about the dude and it’s all real. It’s unbelievable. Truly bigger-than-life-type person, so it's been really awesome to be around him.”

Tebow flashed early during organized team activities and rarely dropped balls thrown his way. But once camp began and players donned full pads, Tebow faded. It quickly became clear that Tebow was less of a pass-catching option than Tyler Davis, a sixth-round selection in 2020, and second-year pro Ben Ellefson.

His blocking woes and lack of experience on special teams made Meyer's decision a relatively easy one.

“It’s special teams," Meyer said. "This whole roster management is really critical as we journey here through the next two weeks. Two of the special teams phases are tackling, and he’s never tackled. ... We expect to be very good on special teams. Tight end and tailback, if you can’t contribute on special teams, that’s a tough go.”

Tebow helped Meyer and the Gators win two national championships while becoming one of the most recognizable athletes in college sports.

Denver selected Tebow with the 25th overall pick in the first round in 2010. He led the Broncos to a playoff victory in his second season, but his long windup and inaccuracy led to a short NFL career. He spent time with the Broncos, the New York Jets, New England and Philadelphia.

His last meaningful game came with the Jets in 2012. The Eagles cut him following training camp in 2015, with then-coach Chip Kelly saying Tebow wasn’t good enough to be Philly’s No. 3 QB.