Titans defense hopes to shore things up against Bengals 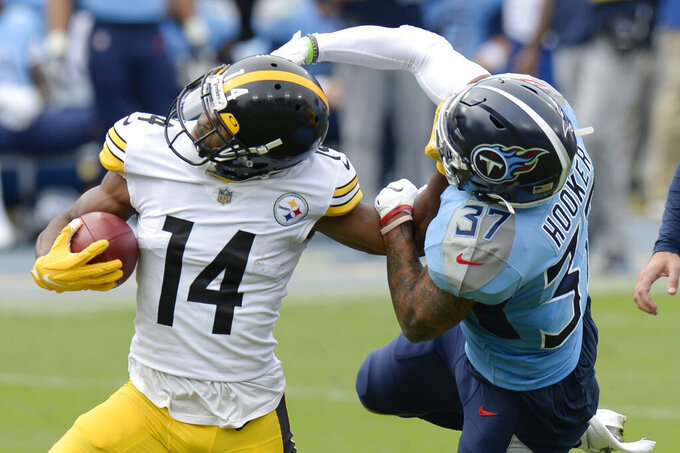 His defense, one of the worst in the NFL, faces an offense that has already allowed a league-high 28 sacks and could be missing three starting offensive linemen.

A mismatch? Perhaps. But at this point, Vrabel is more concerned with making sure the Titans find solutions for their own struggles.

“We can’t worry about their injuries,” he said. “We have to focus on taking care of the Titans and dealing with our own issues as they work through the week."

The ugly stats tell part of the tale.

Tennessee (5-1) has allowed opponents to convert third downs at a rate of 61%, the worst in the league. The red zone touchdown rate (80.9%) ranks 31st. Only the Jaguars and Panthers have fewer sacks than the Titans (seven), and all of it comes after Tennessee presumably upgraded its defense by signing free-agent linebacker Vic Beasley Jr, the NFL's 2015 sacks champion, and three-time Pro Bowl defensive end Jadeveon Clowney in September.

Instead of improving, though, the Titans have regressed.

“We’re not as detailed as we need to be whether it’s third-and-short, third-and-medium, or third-and-long," safety Kevin Byard said. “We’re giving up all the varieties. We have to be better and we have to go watch this film and continue to correct those things. It comes down to pride, honestly."

They're hoping Sunday is the start of a turnaround.

Yes, the Titans are facing a talented rookie quarterback, Joe Burrow, who has been scoring points by the dozens. But they're also playing a team that has blown leads in the past two, lost three straight and struggled to stop the run — a bad combination with defending rushing champ Derrick Henry coming to town.

Plus, Cincinnati's struggles could be amplified with right tackle Bobby Hart (knee) already ruled out this week and decisions still to be made on left tackle Jonah Williams (neck) and center Trey Hopkins (concussion protocol).

But coach Zac Taylor believes injuries may not be the Bengals biggest obstacle Sunday. Winning the turnover battle could be the real equalizer for Cincinnati (1-5-1).

“They’re taking advantage of the tipped throws," Taylor said noting the Titans league-high plus-9 turnover margin. “When the ball’s tipped up in the air, they go get it."

He’s tied the franchise record for most 300-yard games in a season (five) and needs one more to tie Andrew Luck’s rookie record (six). Burrow heads into Week 8 leading the league in completions (195) and attempts (293) and No. 3 in yards passing (2,023).

Tennessee had a four-game streak of scoring 31 or more points end last week, but Tennessee still averages 31.4 points, fourth in the league.

The Titans also average 401.3 yards per game, have allowed seven sacks and again have the league’s top rusher. Henry has 663 yards on the ground. He’s had 75 or more yards five times this season, is second with seven TD runs and can match the franchise record by scoring in his fifth consecutive games Sunday. Earl Campbell did it twice, 1979 and 1983, DeMarco Murray achieved the feat in 2016 and Henry did it last year.

The two-time Pro Bowler had 82 1/2 sacks, second in franchise history behind Eddie Edwards (83 1/2). Dunlap is the sixth defensive starter from opening day 2019 to be jettisoned by the Bengals. Dunlap joins defensive lineman Ryan Glasgow, linebackers Nick Vigil and Preston Brown and cornerbacks Dre Kirkpatrick and safety B.W. Webb as castoffs.

Taylor and Titans quarterback Ryan Tannehill worked together for eight consecutive seasons — the first four at Texas A&M and the next four with the Miami Dolphins.

The Titans quarterback says he respects Taylor's coaching style, work ethic and the effort he made to help become a better player.

“I was very fortunate to work with my father-in-law, Mike Sherman (at A&M), and to go into the NFL with the same system," Taylor said. “Then we drafted Ryan which made for a seamless transition. Not many people go through a change like that, going from one team to another with the same system and the same quarterback.” ___