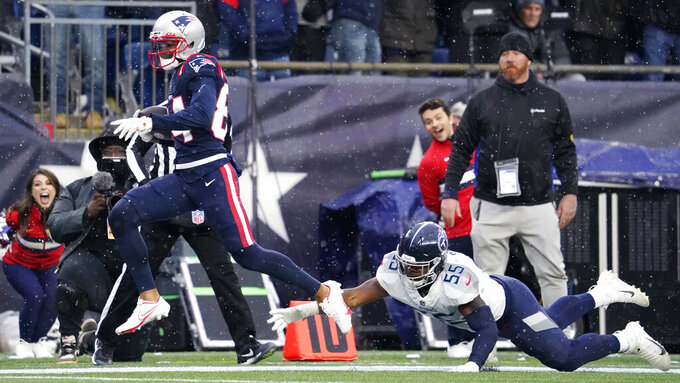 New England Patriots wide receiver Kendrick Bourne, left, out runs Tennessee Titans inside linebacker Jayon Brown (55) on his touchdown during the second half of an NFL football game against the Tennessee Titans, Sunday, Nov. 28, 2021, in Foxborough, Mass. (AP Photo/Steven Senne)

Two kicks that clanged off the same upright. A missed tackle that turned a short pass into a 41-yard touchdown. Three fumbles in New England territory, and an interception in the end zone.

A lot of things went wrong for the Tennessee Titans in their 36-13 loss to the Patriots on Sunday, and so many of them were self-inflicted.

“We did some good things. We did some, obviously, things that are going to get you beat. That is somewhat frustrating,” Titans coach Mike Vrabel said after a second straight loss that dropped Tennessee from the conference's top seed. “Penalties on special teams. Turnovers. So you don’t have to look too hard on why we lost.”

The Titans (8-4) seemed like the dominant team in the AFC and cruising for the No. 1 playoff seed before losing to the one-win Houston Texans last week. Now they are third behind New England (8-4), with seven-win Baltimore playing later Sunday.

“We’ve got a bye. We’ve got to get healthy mentally and physically. And get back to playing football how we know how to play it, taking care of the football," Vrabel said. "A lot of things to improve.”

Tennessee got more than 100 yards from two running backs — Dontrell Hilliard (131 on 12 carries) and D'Onta Foreman (109 on 19). But three different backs fumbled in the game.

Add in Ryan Tannehill's interception in the end zone, which not only cost the Titans a scoring chance but rescued New England from having to take over on its own 2-yard line, and the mistakes were insurmountable.

“You kill the momentum,” said Tannehill, who had season lows with 11 completions for 93 yards. “We’re marching the ball, marching the ball. I felt like every time we touched it, we were doing good things. We kind of shot ourselves in the foot a couple times by putting it on the ground.”

Things started out poorly for the Titans, who were penalized on the opening kickoff return and then gave up two tackles for loss in the first three downs. On the ensuing punt, Tennessee committed two penalties, erasing the kick that was downed at the New England 31.

Gunner Olszewski ran the re-kick back 15 yards to the Titans 37 — a 32-yard swing in field possession — and nine plays later it was 7-0.

When the Titans did score, Randy Bullock clanged the extra point off the right upright. On a second-quarter field goal attempt, he did it again. (Bullock is the Titans' third kicker this year; Sam Ficken was hurt the Friday before the opener, then Michael Badgley kicked in Game 1 before Bullock was brought in.)

It was still a one-score game in the third quarter when Foreman broke free for a 30-yard run into Patriots territory. But J.C. Jackson stripped the ball and Jalen Mills grabbed it before it went out of bounds.

After trading punts, the Patriots took a 26-13 lead on a short pass that went for a score when the Titans assumed Kendrick Bourne was headed out of bounds; instead, he tiptoed down the sideline into the clear.

Still down 26-13 in the fourth, Tennessee had a chance to keep it close when they went for it on fourth-and-goal from the 2. Tannehill’s pass was tipped by Devin McCourty and intercepted by Jackson. Instead of a touchdown — or even turning the ball over on downs at the 2 — New England had a fresh start at the 20.

“The turnovers, the fumbles hurt us, obviously," Tannehill said. “We ran the ball extremely well the whole game. Had the turnovers and then didn’t convert when we were down in there tight there in the early fourth quarter. So you put all those together, and you put yourself in a difficult situation.”