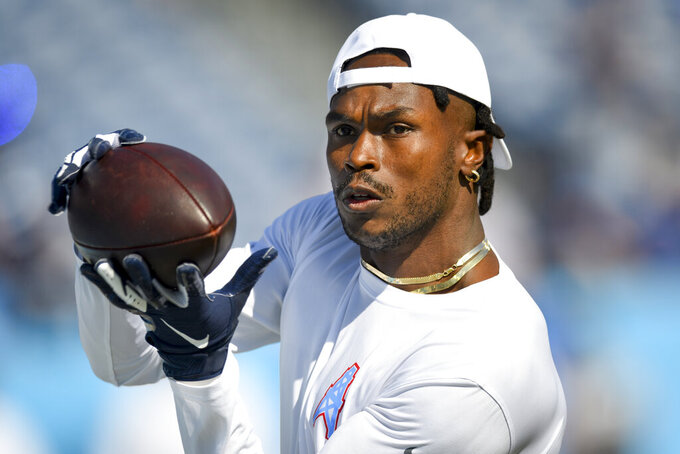 The Titans will have their pair of Pro Bowl receivers available Monday night against the Buffalo Bills.

“I feel great," Jones said. “Did everything I needed to do, and I'm ready to go.”

That matters because Jones is the seven-time Pro Bowl receiver that the Titans (3-2) traded for in June wanting to pair him with Brown, a Pro Bowl pick in his second season last year. The duo started the first three games this season, then Brown hurt a hamstring after eight snaps in a win over Indianapolis.

Jones then tightened up later in the same game and sat out the next two games with a hamstring problem. A nagging hamstring injury limited Jones to nine games last season and 51 catches for 771 yards in his 10th and final season in Atlanta.

“Hamstring?” Jones said. “It was just tight, just precautionary reasons like that. I feel good now.”

The Titans need both Jones and Brown back on the field together. Jones has the only 100-yard receiving performance for Tennessee this season with 128 yards on six catches in a win at Seattle. Currently, reserve running back Jeremy McNichols leads the team with 17 receptions for 160 yards thanks to screen passes.

Jones and Brown are the big physical receivers needed to stretch the field for an offense that ranks 26th averaging 221.4 yards a game. The Titans' longest pass play was a 51-yarder to Jones in that win over Seattle.

Count Jones among those excited to see what happens once both he and Brown get into a groove together. For now, the 32-year-old Jones is busy practicing and working on his timing with Ryan Tannehill. Jones said it'll be ready Monday night.

“Don't quote me on this,” Jones joked. “Nah. Just wait and see on (Monday). ... I’m not going to stir it up or anything like that. I'm very confident in myself and my teammates.”

Brown hasn't had more than 49 yards receiving through four games and only one touchdown after he caught 70 passes for 1,075 yards and 11 TDs in 2020. In his return last week in a win at Jacksonville, Brown caught three of six passes thrown to him for 38 yards.

“Julio coming back this week, it gives us an advantage because you’ve got to respect him,” Brown said. “But also we got to play. We got to make plays. That’s what it comes down to.”

Brown returned last year against the Bills in a prime-time game coming off a knee injury. He caught nine passes for 82 yards and a touchdown. Brown said the Bills' secondary this season “got a lot better.” He's feeling better himself after a week of practice boosting his confidence.

“It was a good night for me,” Brown recalled of his last game against Buffalo. “I came out and played really well. Gonna try to do that again.”

For coach Mike Vrabel, he's got to enjoy seeing an injury report showing Jones and Brown among 14 Titans — down from 23 last week. Having the two wide receivers practice fully is a relief.

“We want our best players to be in there as much as they can be in there,” Vrabel said. “That is usually good for the team.”