Tomlin: Steelers need to work back toward 'respectability' 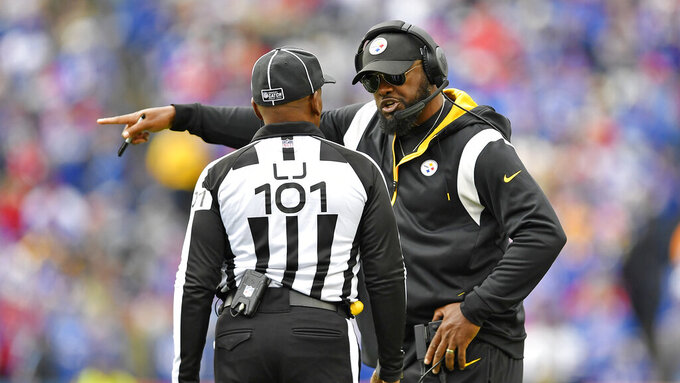 PITTSBURGH (AP) — The hole the Pittsburgh Steelers find themselves in is basically unprecedented during Mike Tomlin's long and largely successful tenure.

Five games into the season, the Steelers (1-4) are injury-plagued and toothless on defense. Young, inexperienced and ineffective on offense.

The upcoming schedule is daunting. And there is no Super Bowl-winning quarterback in the huddle to bail them out or calm the waters.

The standard might still be the standard. But it isn't being met. Not by a longshot. Facing the prospect of his first losing season as an NFL coach, Tomlin has one message to his staff and his players: say less, do more.

“We’ve got to put our heads down and work hard and diligently stay together for an extended period of time as we grind our way back to respectability if you will,” Tomlin said on Tuesday, less than 48 hours removed from the franchise's worst loss in 33 years, a 38-3 beatdown in Buffalo in which the Steelers were outclassed, outplayed and outcoached in every facet.

That's how big the hole is in Pittsburgh at the moment. The Steelers are 30th in scoring, 30th in yards allowed and in the mix to potentially land the first pick in the draft next spring.

It's not the position Tomlin or his team expected to be in, even as it transitioned from Ben Roethlisberger to (briefly) Mitch Trubisky to Kenny Pickett, who moved the ball in his first NFL start but failed to produce a touchdown, something that's been an issue in Matt Canada's increasingly pedestrian 22-game tenure as offensive coordinator.

While Tomlin said in the aftermath on Sunday he would turn over every stone in search of helping the Steelers plot a path forward, the process — at least at the moment — does not include moving on from Canada.

Tomlin, a former defensive coordinator and coach earlier in his career who has long openly acknowledged being an active participant in putting together Pittsburgh's defensive game plan, said he is “highly involved” in the offense as well.

The Steelers promoted Canada from quarterbacks coach to offensive coordinator in January 2021 after Randy Fichtner was let go following a first-round playoff loss to Cleveland.

The team retooled in the offseason, overhauling a portion of the offensive line, bringing in two new quarterbacks in Trubisky and Pickett and drafting wide receiver George Pickens in the second round.

Any sense of progress, however, is difficult to find. Second-year running back Najee Harris is averaging just 3.2 yards per carry and the Steelers are the only team in the league still waiting for a receiver to score a touchdown.

Tomlin, however, stressed he's “confident” in Canada and isn't going to shake things up simply “in an effort to quell the masses or anything of that nature.”

The second-winningest coach in Steelers' history repeatedly blamed himself and downplayed postgame frustration from players such as cornerback Arthur Maulet, who challenged his teammates in the locker room to up their care level.

“When it is that bad across the board, it starts with me,” Tomlin said. “We don’t need to seek comfort because, you know, there’s enough blame to go around. We need to be solution-oriented.”

The schedule offers no relief, at least in the short term. Tampa Bay (3-2) and Tom Brady visit Acrisure Stadium on Sunday followed by trips to Miami (3-2) and Philadelphia (5-0). It may very well get worse before it gets better.

NOTES: CB Cam Sutton (hamstring), S Minkah Fitzpatrick (knee), DT Larry Ogunjobi (back), DT Montravius Adams (hip) and TE Zach Gentry (knee) will be monitored during the week. ... CB Levi Wallace and TE Pat Freiermuth are both in the concussion protocol. ... Tomlin offered no update or timetable for the possible return of star LB T.J. Watt, who is on injured reserve with a torn left pectoral and underwent what the team called a minor knee procedure last week.