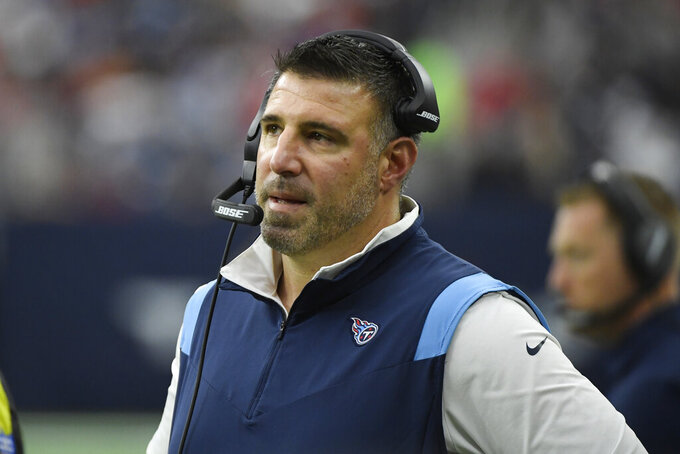 Tennessee Titans head coach Mike Vrabel watches from the sidelines during the first half of an NFL football game against the Houston Texans, Sunday, Jan. 9, 2022, in Houston. (AP Photo/Justin Rex ) 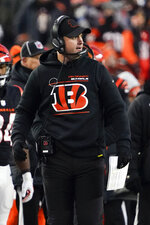 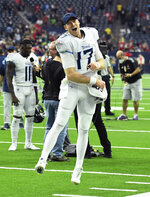 NASHVILLE, Tenn. (AP) — The Tennessee Titans have survived using more players than any NFL team in a non-strike season and still earned the AFC's No. 1 seed.

They're as rested and healthy as they've been all season, and now they have back Derrick Henry, the NFL's top rusher in 2019 and 2020, for the postseason.

It's time to take the next step Saturday in their AFC divisional game with Cincinnati.

“Everything that we dream about since we were kids is right there in front of us," All Pro safety Kevin Byard said.

The Titans (12-5) start their third straight postseason before a sold-out crowd at Nissan Stadium trying to take advantage of home-field advantage where they went 7-2 during the regular season. They lost a wild-card game to Baltimore here a year ago and haven't won a playoff game at home since Jan. 11, 2003.

The two-time AFC South champs have won three straight and four of five. One more win puts them in their second AFC championship game in three seasons.

“These guys were prepared to play long into 2022,” Titans coach Mike Vrabel said.

This is the revival of an old AFC Central rivalry between fourth-seeded Cincinnati and the former Houston Oilers. The Bengals won the only playoff game between these teams 27-14 on Jan. 6, 1991. That was their last postseason win until second-year quarterback Joe Burrow led them to a 26-19 victory over the Raiders to snap that 31-year drought.

Now these young Bengals (11-7) must end another playoff skid to reach Cincinnati's first AFC championship game since January 1989 and third overall. The Bengals are 0-7 in the playoffs away from home, and Houston is the only other NFL team that has yet to win a road playoff game.

“We’re here to win," Bengals running back Joe Mixon said. “We don’t care about some theory I guess that everybody’s pretty much worried about. We know what we’ve got in front of us. We know what we have to do in order to get where we want to be. We’ve got the path laid out for us.”

Of course, the Titans running back who wears No. 22 would return for a game on Jan. 22, 2022. Henry, the 2020 AP NFL Offensive Player of the Year, has been taken off injured reserve and will start his first game since breaking his right foot Oct. 31.

Henry has practiced since Jan. 5, and teammates couldn't be happier to have back the man averaging 117.1 yards rushing in the postseason. The unknown is how much the Titans can hand the ball to someone who hasn't played in a game in 12 weeks, even if Henry is 6-foot-3 and 247 pounds.

The Titans had Henry along with wide receivers A.J. Brown and Julio Jones for all of 120 snaps over five games because of injuries. Not only is Henry healthy, both Brown and Jones, the seven-time Pro Bowler picked up in a trade last June, are feeling good.

Brown led the team with 869 yards receiving and five TD catches. Jones had his worst statistical season while dealing with a nagging hamstring that landed him on injured reserve at one point. Jones did average 14 yards per catch, highest among team receivers with at least 10 catches.

Burrow had an NFL-leading 14 interceptions through 13 weeks of the season. In the five games he’s played since then — including last week’s playoff win — he’s had none, with 13 touchdown passes. His streak of 180 pass attempts without a pick is the second longest currently in the NFL behind the Packers’ Aaron Rodgers.

The Bengals also have not turned over the ball at all since two fumbled punts in an overtime loss to the San Francisco 49ers on Dec. 12. The team is plus-4 in turnovers since then.

The Bengals will have defensive end Trey Hendrickson who cleared concussion protocol for this game. His 14 sacks in the regular season led the Bengals and was fifth best in the NFL. He had a strip-sack of the Raiders’ Derek Carr last week that resulted in a turnover. The concussion forced him out of the game later.

“He’s been in these moments before,” coach Zac Taylor said. “He’s one of our premier players. It’s good to have him.”

Cincinnati will be without defensive tackle Larry Ogunjobi, placed on injured reserve after hurting a foot last week. Hendrickson and Ogunjobi were signed as free agents before the season to beef up the pass rush and run defense. It worked.

The Titans, along with Green Bay, had the latest byes during the regular season Dec. 5, and they've been off since Jan 9 after earning a first-round bye. Nobody has been better coming off nine or more days of rest than the Titans, 8-0 since Vrabel was hired in 2018.