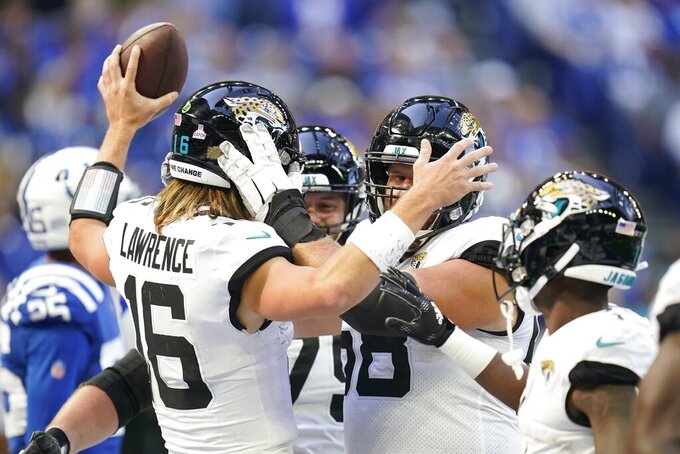 Jacksonville Jaguars quarterback Trevor Lawrence (16) celebrates with his teammates after he ran in for a touchdown during the second half of an NFL football game against the Indianapolis Colts, Sunday, Oct. 16, 2022, in Indianapolis.(AP Photo/Michael Conroy)

OPENING LINE: Jaguars by 3, according to FanDuel Sportsbook.

TURNOVER DIFFERENTIAL: Giants plus-2; Jaguars even.

GIANTS PLAYER TO WATCH: QB Daniel Jones is having his best season. He is completing 67% of his passes for 1,021 yards, with five TDs and two INTs. He also has 236 yards rushing and two scores.

JAGUARS PLAYER TO WATCH: Edge rusher Travon Walker, the No. 1 pick in April’s draft, hasn’t had a sack since Week 1 and committed costly penalties in consecutive games. He was flagged for roughing the passer on a third-and-12 play at Indy a week after drawing an unnecessary roughness penalty on third-and-20 against Houston. Both extended drives that ended in touchdowns.

KEY MATCHUP: Saquon Barkley leads the NFL with 771 yards from scrimmage (616 rushing, 155 receiving) and has been instrumental in the Giants' first 5-1 start since 2009. He faces a Jaguars defense that ranks third against the run, allowing 3.6 yards a carry, and has allowed just one 100-yard rusher (Philadelphia’s Miles Sanders) in six games.

SERIES NOTES: The Giants are one of only two NFC teams (along with Tampa Bay) that have a losing record against Jacksonville, which has dropped 18 in a row against teams from that conference. It’s the longest inter-conference skid in NFL history. The Jaguars have won two straight and three of four in the series. They are 3-0 at home, beating the G-men in 1997, 2006 and 2014. Jacksonville’s most recent victory against an NFC team came in the 2018 season opener, a 20-15 victory against the Giants.

STATS AND STUFF: The Giants, who have won three straight for the second time in six years, have five wins by a combined 21 points. ... New York is looking for its first 6-1 start since 2008. ... Jones is 8-3 in his past 11 starts. ... Barkley’s rushing total is second in the NFL to Cleveland’s Nick Chubb (649 yards). ... Rookie TE Daniel Bellinger has TD catches in two straight. ... Rookie WR Wan’Dale Robinson caught his first NFL TD pass against the Ravens. ... S Julian Love had the Giants’ first and only interception last week. ... DL Dexter Lawrence has sacks in three straight and now a career-high four. ... LB Kayvon Thibodeaux, the No. 5 pick in the draft, earned his first career sack and forced a fumble in the final minutes last week. ... Jaguars QB Trevor Lawrence completed a career-high 90.9% of his passes last week. He also ran for two scores. ... RB Travis Etienne is looking for his third consecutive game with at least 100 yards from scrimmage. ... RB James Robinson has touchdowns in two of his past three home games. ... TE Evan Engram faces the team that drafted him 23rd overall in 2017. He's looking for his third consecutive game with at least five catches.

FANTASY TIP: Barkley is the only slam-dunk start for either team. Several Jaguars could be considered potential fill-ins to help during bye weeks, mainly Lawrence, Etienne, Robinson, Christian Kirk and Engram.