Vikings, 49ers head into meeting on upswings in NFC 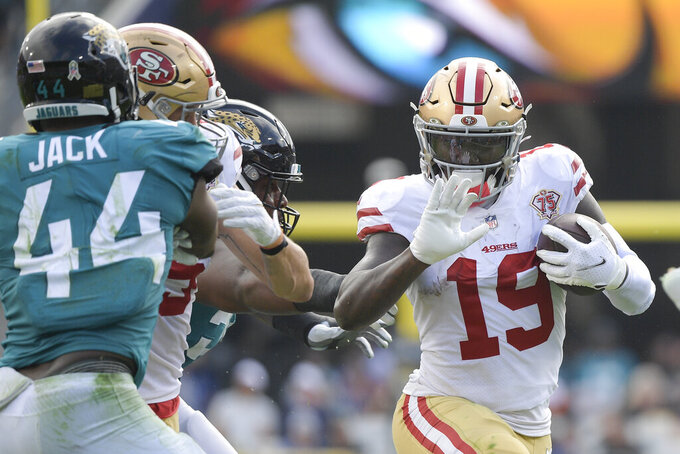 SANTA CLARA, Calif. (AP) — The Minnesota Vikings and San Francisco 49ers found themselves in similar predicaments a few weeks ago after seasons that began with high hopes saw both teams struggling at the midpoint.

Both have responded with back-to-back wins to get into the thick of the NFC playoff race after getting back to .500 headed into Sunday's showdown. It's a game that could play a key part in determining a wild-card spot.

“I think they’ve been battling back this season, just like we have,” 49ers coach Kyle Shanahan said. “Two teams that are probably playing their better ball of the year right now.”

San Francisco (5-5) had lost five of six games before the recent turnaround that featured convincing wins over the Rams and Jacksonville. Minnesota (5-5) had lost back-to-back nail-biters to Dallas and Baltimore before responding with wins over the Chargers and Green Bay.

“Winning these games now definitely gives you a ton of confidence, a ton of momentum going into the back half of the season,” Vikings cornerback Patrick Peterson said. "I’ve been in this league a very, very long time. Tampa Bay did it last year, getting hot at the right time, and I think things are just starting to come together for us to definitely move in the right direction.”

The Vikings have done it thanks to strong play from quarterback Kirk Cousins, who has thrown for 635 yards and five TDs the past two weeks. He hasn't thrown an interception in his last 195 attempts.

That has helped Minnesota come out on the right end of close games after having nine of their first 10 contests decided by seven points or fewer.

“It’s a razor’s edge between winning and losing," he said. “We’ve been on the wrong side of the few of these as well and (Sunday) we were able to find the inches to get a win, but you obviously all know how close it is to not going that way.”

The Niners have used a more-balanced approach similar to the style that helped them reach the Super Bowl two years ago. San Francisco has run the ball at least 40 times the past two games, gotten strong defensive play, and efficient performances from quarterback Jimmy Garoppolo.

“Our backs were kind of up against the wall and we’ve kind of responded pretty well these last couple of weeks," Garoppolo said. "We’ve just got to keep riding this momentum we’ve got right now.”

Justin Jefferson has 312 receiving yards over the last two games, tied for fifth in Vikings history over a two-game stretch. Jefferson has also tied Randy Moss and JuJu Smith-Schuster for the second-most 100-yard receiving games (11) in NFL history for a player’s first two seasons. Odell Beckham Jr. has the record with 15, leaving Jefferson seven games to catch him.

Jefferson, despite being just 22 years old, has also made an impact on his teammates during the week. Fellow wide receiver Adam Thielen said he’s patterned some quick-twitch moves for use at the top of a route after the way Jefferson has demonstrated them in practice. Peterson, the 11th-year veteran, has relished the opportunity to cover Jefferson, a longtime friend whose older brother played with Peterson at LSU.

“Justin is great for both of us. Just like iron sharpening iron,” Peterson said. “Justin is a young second-year player, but he acts and plays like he’s been here forever.”

The Vikings are awfully thin up front right now. Star defensive end Danielle Hunter (pectoral) is out for the season; nose tackle Michael Pierce (elbow) is out at least one more game on injured reserve; defensive tackle Dalvin Tomlinson landed on the COVID-19 reserve list this week; and defensive end Everson Griffen was taken for mental health treatment after a worrisome situation played out at his house on Wednesday.

Backup defensive tackle Sheldon Richardson took some turns at defensive end against Green Bay, with favorable pass-rushing results, but the Vikings might not have the luxury of moving him around this week.

The 49ers will present a unique challenge with the way they’ve been using star wide receiver Deebo Samuel to carry the ball out of their injury-ravaged backfield.

“He’s an electric player,” said Vikings defensive end D.J. Wonnum, who played with Samuel at South Carolina. “He’s a receiver in a kind of running back’s body, so he’s strong. He’s physical. He can move.”

After missing almost all of last season with a knee injury, Niners edge rusher Nick Bosa is back to his rookie form of 2019 when he won Defensive Rookie of the Year. Bosa has a career-high 10 sacks, including five in the past four games.

“Bosa is a special player and he’s just as valuable this year as he was his rookie year,” Shanahan told reporters. "He was the difference for us in 2019 and we missed him greatly last year. And you guys can see why again this year. I think he’s getting better each week. And I think he’s playing his best ball right now of the year.”

The Vikings have had a knack for playing with the lead. Minnesota is the 20th team in the Super Bowl era to lead each of their first 10 games by at least seven points. Despite having that kind of lead each game, the Vikings are still 5-5 on the season.

The other 19 teams to do it combined for an .816 winning percentage, with only the 2015 Giants, the 1987 Dolphins and 1967 Giants failing to post a winning record. Those three teams were also 5-5 at this point.