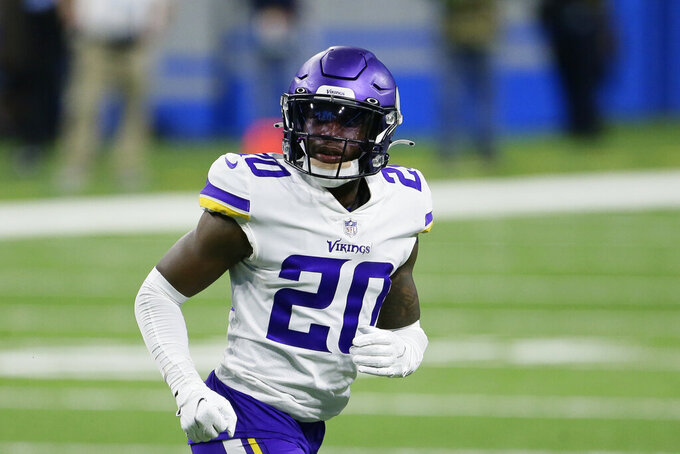 FILE - In this Jan. 3, 2021, file photo, Minnesota Vikings cornerback Jeff Gladney plays during the second half of an NFL football game against the Detroit Lions in Detroit. Gladney has been released by the team, just a couple of hours after he was indicted by a Texas grand jury for felony assault of a woman he was previously in a relationship with. (AP Photo/Duane Burleson, File)

DALLAS (AP) — Minnesota Vikings cornerback Jeff Gladney was indicted Tuesday by a Texas grand jury for felony assault of a woman he was previously in a relationship with, and the team released him about five hours later.

“We take these matters very seriously and condemn all forms of domestic violence,” the Vikings said in a news release. No further comment was offered.

Gladney, a first-round draft pick last year out of TCU, started 15 games as a rookie. He had not been around the team since his arrest in April in Dallas.

He's charged with domestic violence by impeding breathing, for “intentionally, knowingly and recklessly" causing bodily injury and applying pressure to the alleged victim's neck and throat, according to the indictment. The altercation grew out of an argument and took place over a span of more than two hours, according to a civil suit recently filed against Gladney by the former girlfriend. She also alleged in the suit he tried to bribe and intimidate her into keeping quiet.

No court date has been scheduled yet.

Vikings owner and president Mark Wilf, who addressed reporters on a variety of subjects surrounding the team on Tuesday, called the allegations against Gladney “very disturbing and something that’s concerning to us as ownership and to our organization.”

NFL spokesman Brian McCarthy said the league office “will continue to review this serious and concerning matter under the personal conduct policy while the and monitor all legal developments.”

Gladney is subject to waivers and would become an unrestricted free agent if he is unclaimed by another team. If he were to be claimed or signed by another club, he could be placed on the commissioner's exempt list while the case against him moves toward completion. In 2014, the NFL toughened its personal conduct policy to include a baseline six-game suspension without pay for violations involving domestic violence and other related crimes.

Gladney's agent Brian Overstreet said in a statement released to NFL Network that he was disappointed by the Vikings' decision.

“It’s a good thing that innocent until proven guilty still exists in this country,” Overstreet said. “Unfortunately, the Vikings don’t view it the same way.”

Overstreet called the indictment “a normal step in the judicial process” and explained the case is headed for a trial but is not an indication of Gladney's guilt or innocence.

“We received information that the complaining witness in this case came forward and requested the case not be prosecuted,” Overstreet said. "The Vikings did what they thought was best for their organization which we respect, but we still strongly believe in Jeff Gladney’s innocence. We look forward to his day in court so that he can clear his name. At this time, out of respect for the legal process and all parties involved, Jeff and his representatives will have no further comments.”