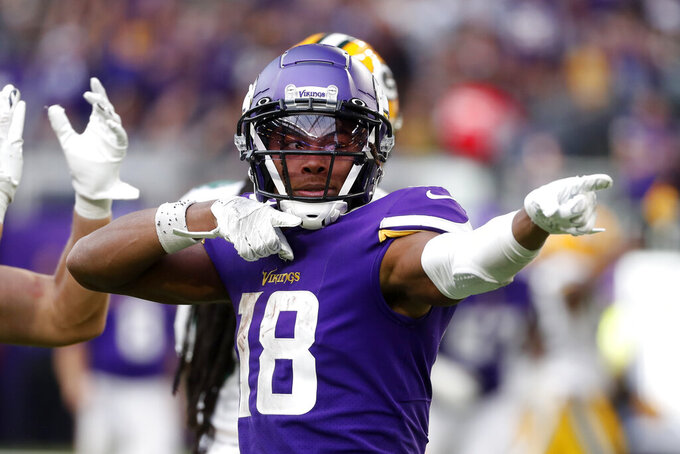 Minnesota Vikings wide receiver Justin Jefferson (18) celebrates after catching a pass for a first down during the second half of an NFL football game against the Green Bay Packers, Sunday, Sept. 11, 2022, in Minneapolis. (AP Photo/Bruce Kluckhohn)

MINNEAPOLIS (AP) — After Minnesota's 15-18 record over the last two seasons prompted dual replacements of the general manager and the coaching staff, a teardown of the roster that would have naturally followed those firings never came to fruition.

For all the flaws the Vikings have revealed in recent years, they still boasted as much top-tier talent as any team in the league. The well-aware Green Bay Packers simply couldn't keep up with it in the season opener Sunday.

“They had obviously a great plan. We knew going into this game that stopping their lead dogs, really offensively and defensively, was going to be an important part of it, and certainly we didn’t get that done,” Packers coach Matt LaFleur said after the 23-7 victory by the Vikings over the three-time defending NFC North champions.

Setting aside the salary cap crunch created in large part by the collection of this star power, there's a reason why Vikings ownership focused on a shift in culture and strategy with the hire of general manager Kwesi Adofo-Mensah and coach Kevin O'Connell and refused to settle for a rebuild.

The Vikings have nine players on contracts carrying an annual average value of $10 million or more, according to salary data website Over The Cap, and most of them made major impacts in the game.

Kirk Cousins played a sound game at quarterback. Dalvin Cook had 108 total yards on 23 touches. Brian O'Neill locked down the right side of the offensive line. Za'Darius Smith and Danielle Hunter each had a sack, and Smith also made a fourth-and-1 stop at the goal line. Harrison Smith came up with the rare interception of Aaron Rodgers.

Then there's Justin Jefferson, of course, who is still playing on a rookie-level deal and thus one of the best bargains in the NFL. His 184 yards receiving and two touchdowns were the biggest difference in the game.

“That’s the thing that I like about our offense," Jefferson said. "We move so much, and we have so many players on our offense that you can’t really stick with one player."

O'Connell and offensive coordinator Wes Phillips shrewdly put Jefferson in motion, in the slot and on the outside to stay a step ahead of the Packers — and largely away from star cornerback Jaire Alexander.

Cousins passed more on first downs than the Vikings called for in the past, too. The traits of aggressiveness and unpredictability have been hallmarks of the Los Angeles Rams under coach Sean McVay, for whom O'Connell and Phillips previous worked.

“I just felt prepared," O'Connell said. "I felt a trust level with the guys on the field.”

Greg Joseph kept up the momentum from a strong preseason by making all of his kicks, including a career-best 56-yarder among his three field goals. The 28-year-old from South Africa has missed only one field goal (a 53-yard try last Dec. 9 in a win over Pittsburgh) over his last 12 games.

Rookie safety Lewis Cine aggravated a knee injury in practice during the week and was inactive for his first NFL game. The first-round draft pick remains behind Camryn Bynum on the depth chart.

Rookie CB Andrew Booth Jr. hurt his quadriceps on special teams in the first half and did not return, but so far the Vikings with new executive director of player health and performance Tyler Williams have enjoyed a remarkably minimal injury report since the start of training camp. Booth will be questionable to play this week, O'Connell said, but won't be out long term.

1-0 — For the first time in his pro career, Jefferson's team has a winning record. The Vikings never made it above the .500 mark in either of the last two years. They were a combined 1-5 in September.

New defensive coordinator Ed Donatell by all accounts called an effective game to beat Rodgers and the Packers, and his players have raved about his creativity and relatability. This week will bring a different set of challenges, with a trip to Philadelphia to face a dynamic, slippery quarterback in Jalen Hurts on a Monday night in front of a raucous crowd.

Hurts and the Eagles had 455 total yards in their opening win at Detroit with four rushing touchdowns and an average of 5.5 yards per rush. The Eagles were fourth in the NFL last year with 4.9 yards per attempt. The Vikings allowed an average of 6.2 yards per rush to the Packers, and only four teams yielded a higher total this week.