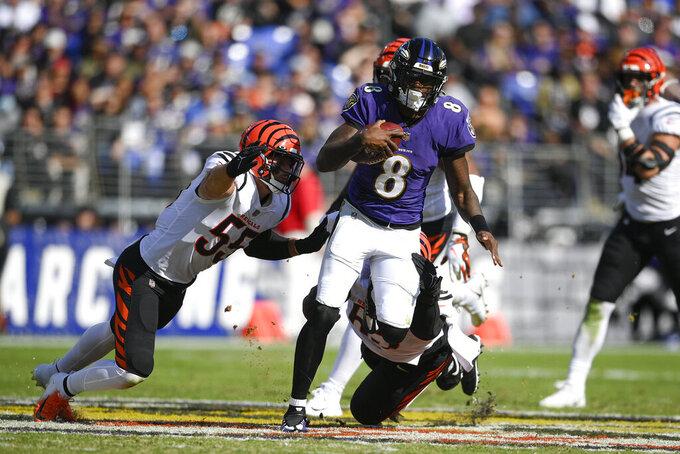 OPENING LINE: Ravens by 5½, according to FanDuel Sportsbook.

TURNOVER DIFFERENTIAL: Vikings plus-4; Ravens minus-1.

VIKINGS PLAYER TO WATCH: LT Christian Darrisaw. The first-round draft pick from Virginia Tech, whose rookie season was set back in August by his second groin surgery this year to fix an injury he played his final year in college with, cracked the starting lineup two games ago. He’s a native of Upper Marlboro, Maryland, who’s expecting dozens of family and friends at the game.

RAVENS PLAYER TO WATCH: WR Marquise Brown. The Ravens have been able to lean on their passing game more this season, and Brown is sixth in the AFC in yards receiving. He also has six touchdown catches, and Sammy Watkins' injury problems have made Brown even more important.

KEY MATCHUP: Minnesota WR Justin Jefferson vs. the Baltimore secondary. Poor tackling has been a major problem for the Ravens this season and is part of the reason three quarterbacks have already thrown for 400 yards against them. Ja'Marr Chase had a big game against Baltimore for Cincinnati, and now Jefferson will try to do the same.

KEY INJURIES: The Vikings will be without DT Michael Pierce (elbow) against his former team. He was hurt more than a month ago. DE Danielle Hunter (pectoral) is done for the season, and CB Patrick Peterson (hamstring) is out for at least another two games. ... Baltimore has been without Watkins (thigh) and RB Latavius Murray (ankle) but is hoping to have them back soon following the open date. OL Patrick Mekari (ankle) has also missed practice time this week.

SERIES NOTES: The Vikings have won only one regular-season game in Baltimore: in 1998 when they went 15-1. The Vikings were 0-8 on the road against the Colts before they moved from Baltimore, including a playoff game in 1968 when both teams were in the pre-merger NFL. They’re 1-3 on the road against the Ravens, with losses in 2001, 2005 and 2013. The last time Minnesota played at Baltimore, the teams combined for five touchdowns in the last 2:05 of the Ravens' 29-26 win.

STATS AND STUFF: Vikings QB Kirk Cousins averaged a season-low 5.26 yards per attempt last week against the Cowboys, his fifth-lowest mark in 54 regular-season games with Minnesota. Cousins has the best interception percentage among qualified passers in the NFL this year, at 0.7%. ... Vikings WR Adam Thielen has 20 TD receptions in his last 22 games. ... The Vikings lead the NFL in sacks per game and with 24 sacks in seven games have already surpassed their 2020 season total (23). ... Vikings S Xavier Woods is one of four players in the league this year with at least two interceptions and two forced fumbles. ... The Ravens have the NFL's longest active winning streak against the NFC with 11 victories in a row. ... Since the team's 1996 inception, Baltimore is an NFL-best 17-8 in games immediately following a bye week. Coach John Harbaugh is 10-3 in those games. ... The Ravens rank third in the league in red-zone offense (touchdowns 72.7% of the time) and tied for second in red-zone defense.

FANTASY TIP: WR Rashod Bateman continues to look like a solid sleeper for Baltimore now that he's healthy — and especially in light of Watkins' injury problems. Bateman had a total of seven catches in his first two games.