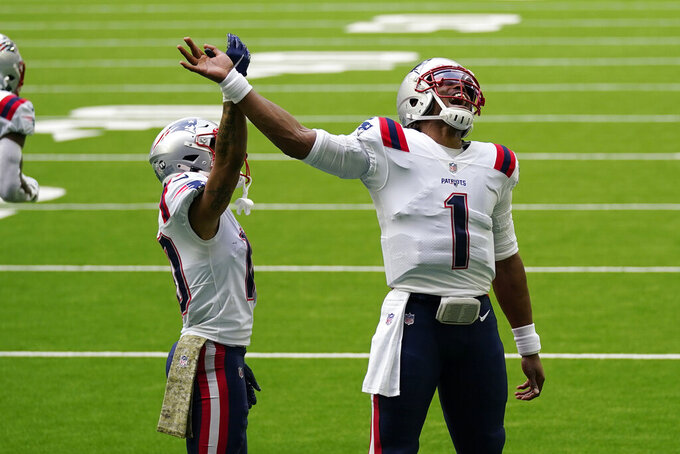 HOUSTON (AP) — Deshaun Watson dragged two defenders into the end zone for a touchdown early on Sunday and J.J. Watt swatted down pass after pass from Cam Newton.

Houston's two biggest stars both showed up huge to help the Texans beat the New England Patriots 27-20 for their first win of the season against a team other than division-rival Jacksonville.

Watson threw for 344 yards and two scores, but the highlight of the game came on a play he made with his feet.

New England led 10-7 after a field goal in the second quarter when Watson scrambled 4 yards for a touchdown, dragging a linebacker and defensive back into the end zone with him to give the Texans a lead they wouldn't relinquish.

“I was just trying to make something happen," Watson said. “It just gave the offense energy and the whole team energy when they saw that and it continued through the rest of the game."

Watson's two touchdown passes and scoring run all came in the first half as the Texans (3-7) built a 21-10 halftime lead.

Watson and Houston’s offense slowed down after that to allow the Patriots (4-6) to get back into it. But a 46-yard field goal extended the lead to 27-20 with about 3½ minutes to go.

Houston's beleaguered defense sealed the victory with a stop after that. Watt swatted down Newton's pass on third down and heavy pressure from Justin Reid forced him to throw the ball away on fourth down to give the Texans the ball back.

Reid also had his first career sack on Sunday and finished with three tackles for losses and two quarterback hits.

Early in his career, Watt earned the nickname “J.J. Swatt” for his uncanny ability to knock down passes at the line. Texans fans hadn't seen much of J.J. Swatt in recent years, but he was back in full force on Sunday when he defended a career-high four passes.

“He’s J.J. Watt, what do you expect ... he’s an All-Pro, perennial All-Pro," Newton said. “He’s a Defensive Player of the Year, one of the best players in this generation."

Added Houston interim coach Romeo Crennel: “When J.J.’s on they know he’s coming and he gets the quarterback off the spot and makes it tough for the quarterback to get his feet set and throw the ball down the field."

It is the first time since 2009 that the Patriots will have at least six losses in a regular season.

“It was a disappointing outcome for us today," New England coach Bill Belichick said. “We had some opportunities throughout the course of the game and just couldn’t do enough with them."

The Texans’ win gave Crennel a rare victory by a former Belichick assistant against his former boss.

The Texans' NFL-worst run defense held the Patriots to 86 yards rushing after they entered the game averaging 161.1 yards a game.

“We all know that we’ve had our struggles against the run this year so far... (so) for us to hold them to 86 yards is a huge accomplishment for us," Watt said.

It was the first game in Houston with the roof open since Nov. 30, 2014, on a nice day where the temperature was 78 at kickoff. The crowd was limited to 12,503 because of coronavirus restrictions.

Newton threw for 365 yards and a touchdown, but was limited to a season-low 6 yards rushing.

New England got within 21-17 with about eight minutes left in the third quarter when Newton threw a 42-yard touchdown pass to Damiere Byrd, who finished with a career-high six catches for 132 yards.

Houston settled for a 36-yard field goal later in the third after Watson’s pass on third-and-3 was too high for Keke Coutee.

The Patriots led early after a 9-yard touchdown run by Damien Harris on their first possession.

Houston tied it when Watson connected with Randall Cobb on a 3-yard score later in the first. Brandin Cooks had a 44-yard reception earlier in that drive to set up the score.

The Texans made it 21-10 when Watson threw a 6-yard touchdown pass to Coutee just before halftime.

New England: RB Rex Burkhead sustained a knee injury early in the third quarter and had to be helped off the field. He was later taken to the locker room on a cart.

Houston had a season-high 274 yards in the first half. All but three of those yards came from Watson as he threw for 241 yards and added 30 yards rushing.

Patriots: Host the Cardinals next Sunday.

Texans: Visit the Lions on Thursday.