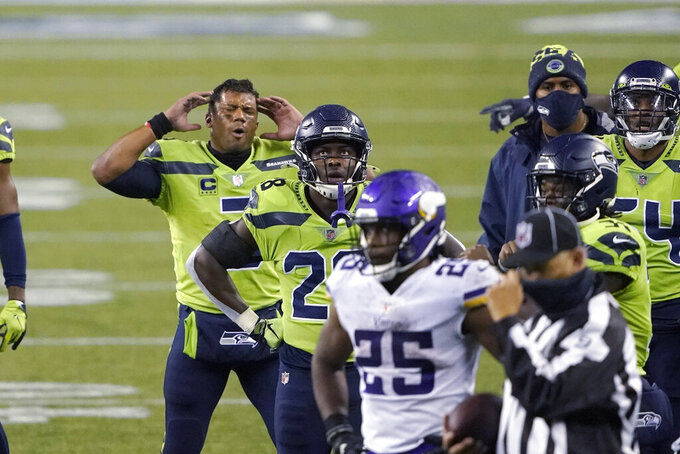 Seattle Seahawks quarterback Russell Wilson, left, and teammates wait with Minnesota Vikings players on the field for a final review of a play at the end of the second half of an NFL football game, Sunday, Oct. 11, 2020, in Seattle. The call went in the Seahawks' favor and they won 27-26. (AP Photo/Ted S. Warren)

Teams have been going for it, and converting, on fourth down at an unprecedented rate this season in the NFL.

There have been few games where fourth-down decisions had as big an impact as last Sunday night in Seattle, when the Seahawks used two fourth-down conversions after stopping Minnesota on fourth-and-1 to beat the Vikings 27-26.

The increase is a sign of greater influence from analytics, which show teams should go for it on fourth down at a much higher rate than they do.

The numbers pointed in favor of the Vikings' decision to bypass a short field goal that would have put them up by eight points in favor of trying to convert and run out the clock. According to EdjSports, the decision increased Minnesota’s chances of winning by 2.1 percentage points.

While going for it when behind late in the fourth quarter is typical, some of the other decisions haven’t been. Tampa Bay became the second team to go for it from inside its own 20 in the first half of a game.

In all, teams have gone for it 56 times on fourth down in the first half this season, converting 35 of them for a 62.5% clip.

COMEBACK KIDS: It seems like every week a team is making a notable comeback or blowing a big lead, depending on the perspective. The Chargers are the latest, having blown 17-point leads in losses the past two weeks to Tampa Bay and New Orleans. The Chargers are the first team since the 2003 Falcons to lose back-to-back games despite leading by at least 17 points.

The Saints had been 1-35 since Drew Brees arrived in 2006 when falling behind by at least 17 points with the other win coming in 2009 against Miami.

A team has rallied from at least 16 points to win each week this season with the six comebacks in all, more than the NFL had in four of the past five seasons.

DAK’S DONE: Dak Prescott’s prolific season got cut short by 11 games when he went down with a season-ending injury for Dallas. Had he thrown just two more passes, it still could have been a record-setting one. Prescott finished with 222 attempts this season, two shy of the minimum to qualify for records. Prescott averaged 371.2 yards passing per game, which would have shattered the mark of 342.3 set by Peyton Manning in 2013.

WINLESS NOTES: The Jaguars became the first team in NFL history to lose three consecutive games to winless teams, excluding season openers with losses to Miami, Cincinnati and Houston the past three games. That streak will end when Jacksonville faces the one-win Detroit Lions on Sunday.

The 49ers are at the other end, with their only two wins of the season coming against the winless New York Jets and Giants.

QB RUNS: Arizona’s Kyler Murray ran for his fifth TD of the season last week, joining Terry Bradshaw (1972), Cam Newton (2011) and Kordell Stewart (1997) as the only QBs since the merger with five TD runs in the first five games of the season. Overall, the 2,621 yards rushing and 36 TDs from quarterbacks are the most in NFL history through five weeks.