Browns can cap 2020 turnaround with win over rival Steelers 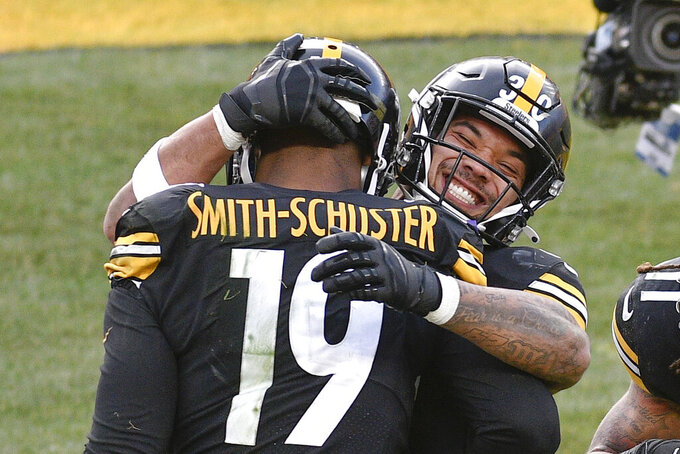 Pittsburgh Steelers wide receiver JuJu Smith-Schuster (19) celebrates with running back James Conner (30) after making a touchdown catch against the Indianapolis Colts during the second half of an NFL football game, Sunday, Dec. 27, 2020, in Pittsburgh. (AP Photo/Don Wright)

CLEVELAND (AP) — One win separates the Browns from completing their turnaround.

All it's going to take for them to make the playoffs for the first time since 2002 and end the NFL's longest postseason drought, return to relevance, and post their most wins in the regular season since 1994, is a victory over Pittsburgh.

Anyway, they've got to deal with COVID-19 first.

Cleveland's topsy-turvy regular season can reach a stirring — and maybe cathartic — crescendo Sunday as the Browns face their dreaded rival. The Steelers have spent the past 20-plus years bullying them while flaunting all those Vince Lombardi trophies and Super Bowl rings.

It's right there for the Browns (10-5), who can end nearly two decades of failure and frustration by beating the Steelers for just the eighth time in 44 games since 1999. Three seasons removed from 0-16, Cleveland can exorcise demons for players and fans.

“I know guys who have been here and just hearing from how they talked about it,” said Pro Bowl running back Nick Chubb. "We have never been in this position before so we are playing for those guys, playing for everyone in this city and playing for each other.”

“It’s a lot of motivation," said Steelers wide receiver JuJu Smith-Schuster, who has vowed to discontinue his pregame logo dancing routine. "For a lot of us, it’s more so being an AFC North division team and knocking them out of the playoffs.”

The Steelers, who clinched the AFC North last week and clobbered Cleveland 38-7 in October, are helping the Browns' cause by resting quarterback Ben Roethlisberger, league sacks leader T.J. Watt and several other prominent starters. Pittsburgh will start backup QB Mason Rudolph, who has a history with Cleveland's Myles Garrett after their ugly helmet-swinging scuffle a year ago.

Garrett was suspended six games by the league for striking Rudolph and has spent the past year rehabilitating his image. Same for Rudolph, who was fined $50,000, accused by Garrett of making a racial slur, and hasn't played well when called upon.

Under normal circumstances, this Rudolph-Garrett reunion in Cleveland, would be top billing.

But 2020's many twists have changed that.

"That is so far in our rearview mirror that we can’t see it,” said Steelers coach Mike Tomlin.

For Browns coach Kevin Stefanski, Sunday's game will cap another turbulent week in his first season on the job. After putting together a game plan, he dealt with numerous disruptions and delays due with his team in the throes of a COVID-19 flare-up.

Cleveland had to cancel practice on Thursday and only had two abbreviated indoor workouts.

The Browns will be without five regulars at least, including top cornerback Denzel Ward, and three assistant coaches. But they will have back Jarvis Landry and three other receivers, whose absence last week as high-risk contacts deprived quarterback Baker Mayfield of playmakers in a shocking loss to the New York Jets.

True to his nature, Stefanski remained stoic amid the COVID chaos.

“We will be prepared,” he said.

The Browns didn't have Chubb in their first meeting with the Steelers, who held Cleveland to 75 yards rushing. Chubb's back, and starting right guard Wyatt Teller will return after missing the past two games with a sprained ankle.

Cleveland gained only 45 yards rushing last week against the Jets, but Teller and rookie left tackle Jedrick Wills, who was held out with COVID-19 symptoms, should reignite the Browns' running attack.

“Jedrick and Wyatt are special players for us,” Mayfield said. “They are vital parts of our offense.”

Watt finished third in the NFL Defensive Player of the Year voting last season. His teammates and his coach are campaigning for him to reach the top spot in 2020.

Watt’s 15 sacks lead the league and he’s been disruptive weekly even with good friend and fellow outside linebacker Bud Dupree lost for the season with a torn ACL. Watt has at least a half-sack in 11 of 15 games, including two last week against Indianapolis.

Mayfield's three fumbles last week were costly. He was twice stripped in the pocket and he coughed up the ball on a late fourth-down sneak, clinching the Jets' second win.

Mayfield was critical of himself following the game, saying he “failed” the Browns.

His mood wasn't much better by midweek, but he was motivated to come out swinging against the Steelers.

“I have had my back against the wall many a time in my life," he said. “I think I handle that type of stuff correctly.”

The last time the Steelers gave Roethlisberger the week off heading into the playoffs, things didn’t go so well. Roethlisberger sat out the 2017 finale — an overtime victory versus Cleveland — with the second seed in the AFC and a first-round bye already assured.

The siesta seemed to blunt Pittsburgh’s momentum. The Steelers sputtered out of the gate against Jacksonville in the divisional round, falling behind by three touchdowns in a stunning 45-42 loss.

Roethlisberger isn’t concerned about history repeating itself, pointing out this layoff won’t be as long.

“Having two weeks off is good," he said. "It makes your body feel good, but you can get a little bit rusty. Only having one week will be just fine. I don’t foresee that being an issue. If anything it will actually be good to physically get myself kind of recovered and back at it.”