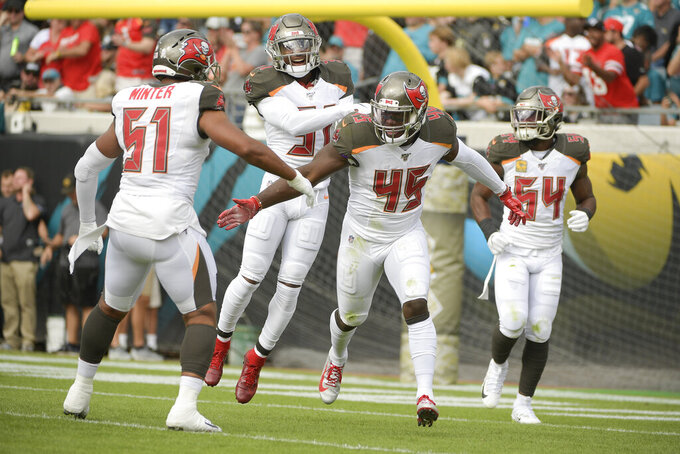 JACKSONVILLE, Fla. (AP) — The Tampa Bay Buccaneers call it "One-Hand Friday." It's a drill designed to test the ball skills of defensive players.

"I just knew my time was coming for it to happen in a game," White said following Tampa Bay's 28-11 victory at Jacksonville on Sunday.

The former LSU standout and fifth overall pick in the NFL draft finished with seven tackles, his first career interception and a fumble return for a touchdown. Fellow linebacker Shaq Barrett added two more sacks for the Buccaneers (5-7), who have won three of their last four and consecutive games for the first time this season.

The Bucs have White locked up for four more seasons. They signed Barrett to a one-year, $4 million deal in free agency. The former undrafted rookie from Colorado State will command a lot more in 2020 and should be an offseason priority for Tampa Bay. He now has a career-high 14½ sacks.

"It's been great so far, a lot of support from everyone on the team," Barrett said. "All the guys are all happy for each other to see each other make a play."

Barrett and White came up huge time after time against the Jaguars (4-8), who have lost four in a row by at least 17 points.

On Jacksonville’s next possession, Barrett beat rookie right tackle Jawaan Taylor and stripped Foles. White scooped up the fumble and ran 14 yards for a score.

"It's my time, I guess," said White, who missed three games with a left knee injury. "I've been set back this year, but I never complained. I just kept my head down and kept working. It's time for me to show out. It's time for me to just show the world what I can do, and I just want to keep building off of it.

"I don't want to take steps back. I want to just keep taking steps forward."

White had 12 tackles last month at Seattle, topped that with a career-high 13 against New Orleans two weeks ago. He also made two sacks last week at Atlanta.

"That's just who he is," quarterback Jameis Winston said. "To him, it's nothing. To us, it's like 'Awe, man, he's amazing,' which he is. But that's just who he is as a player. He's a dominant player. ... He's finally starting to get healthy. He's definitely playing what he's capable of doing — and more."

Foles fumbled again on Jacksonville's third drive, this time in the red zone. Carl Nassib got the strip-sack and the recovery. Barber’s second TD run capped an 83-yard drive.

Rookie sensation Gardner Minshew replaced Foles at halftime and rallied the Jags. He had a chance to make it a seven-point game in the fourth quarter. But his hot pass slipped through Westbrook’s hands and into Sean Murphy-Bunting’s arms for Jacksonville’s fourth turnover.

The Jags ran seven plays inside Tampa Bay's 10-yard line on that drive and failed to score.

"That is one thing that you can take and build off for a very long time," Arians said.

White added a fourth-down stop on a pass to Leonard Fournette late in the game.

"He's is really coming into his own," Arians said. "You can really see him blossoming each week and getting more and more confident. ... He is everything we thought he would be."