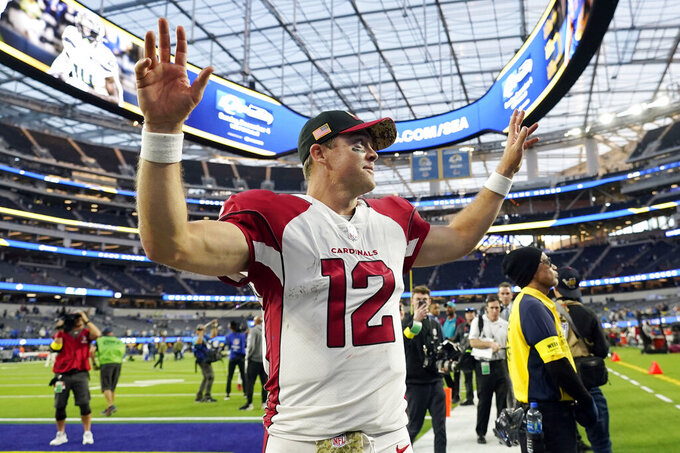 Arizona Cardinals quarterback Colt McCoy (12) walks off the field after a win over the Los Angeles Rams during the second half of an NFL football game Sunday, Nov. 13, 2022, in Inglewood, Calif. (AP Photo/Jae C. Hong)

“Vitamin W is always good,” Cardinals cornerback Antonio Hamilton said, referring to Sunday's win over the Rams. “It makes it easier to go to work. It makes it easier to deal with the nicks, bruises and pains. We needed that. We still have a great opportunity at hand.”

Now the Cardinals are trying to apply the lessons learned from the victory to when starting quarterback Kyler Murray gets back on the field.

The 36-year-old McCoy threw for 238 yards and a touchdown in the Cardinals' 27-17 win over the Rams. The veteran backup has a 3-1 record in spot starts over the last two seasons.

Murray missed Sunday's game because of a sore hamstring, but coach Kliff Kingsbury was hopeful the quarterback will be back soon.

Murray is a much more versatile playmaker than McCoy because he's just as dangerous with his feet as his arm. But McCoy's predictable play Sunday appeared to help the Cardinals, who established a decent rhythm and cut down on the pre-snap penalties and other problems that have nagged them all season.

The Cardinals (4-6) are still in the mix in a crowded and mediocre NFC. They're two games behind the West-leading Seahawks and still in the middle of the wild-card race.

But Arizona needs to string together some victories in a hurry. It has another important game against the 49ers in Mexico City next Monday.

It's unclear if Arizona has the depth to go on a run. It has been hit hard by injuries, particularly on offense.

But for once, it was nice to deal with those problems after a healthy dose of Vitamin W.

“It’s been a struggle, there’s no doubt this season," Cardinals coach Kliff Kingsbury said Sunday. "We haven’t played up to our standards yet, or coached, and that’s something that we’ll continue work to do. But to come here, another team that was struggling and trying to find an identity, kind of like ourselves, and find a way to get it done, it’s a good step in the right direction.”

The Cardinals had four of their five starting offensive linemen out with injuries and still found a way to hold their own against Aaron Donald and the Rams pass rush. Josh Jones and Lecitus Smith, along with center Billy Price, were backups who played basically every snap.

They'll need more from that group over the next few weeks since those starters probably aren't coming back anytime soon.

After that, things get a little dicey.

Cardinals tight end Zach Ertz is out for the season after suffering a knee injury against the Rams. The team hopes receiver Marquise Brown can return from IR soon.

S Budda Baker. The leader of the team's defense wasn't supposed to play on Sunday because of a sprained ankle, but willed himself onto the field. It wasn't just an inspiring show — he was also effective with an interception that he returned for 53 yards.

RB Eno Benjamin was surprisingly released on Monday after he had become an important playmaker early in the season. Now that starter James Conner is fully healthy, Benjamin's role was drastically reduced against the Rams. He played just one offensive snap on Sunday, but it was still surprising to see the Cardinals cut ties.

Ertz is the biggest new one. The Cardinals will roll with backup tight ends Trey McBride, Stephen Anderson and potentially Maxx Williams. McBride is a rookie who was the team's second-round pick.

12. That's the number of road games the Cardinals have won by at least 10 points over the past three seasons. That mark leads the NFL.

The Cardinals play their third straight game against an NFC West opponent when they travel to face the 49ers in Mexico City next Monday. It's a matchup of the same two teams that played in the first regular-season NFL game outside the U.S., which was also in Mexico City in 2005.