Chargers' Okung happy to be back practicing after embolism 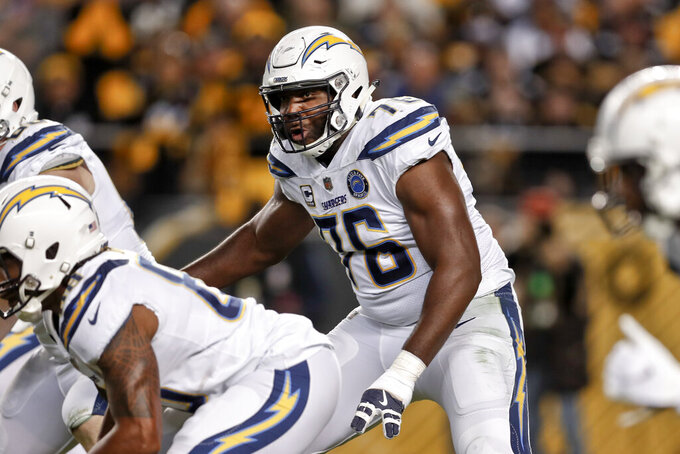 FILE - In this Dec. 2, 2018, file photo, Los Angeles Chargers offensive tackle Russell Okung (76) plays against the Pittsburgh Steelers in an NFL football game in Pittsburgh. Okung took part in his first practice since June 1, 2019, when he suffered a pulmonary embolism during an offseason workout at the team facility. He is being treated for blood clots and has been on the non-football injury list. (AP Photo/Don Wright, File)

COSTA MESA, Calif. (AP) — Russell Okung didn't hold back in describing what the past four months have been like for him and his family.

"I definitely looked death right in the face and if it had not been for a family that cared from my well-being despite my own resistance, I might not be here right now," Okung said.

The Los Angeles Chargers offensive tackle took part in his first practice Thursday since June 1, when he suffered a pulmonary embolism during an offseason workout at the team facility.

He is being treated for blood clots and has been on the non-football injury list. Okung does not need to be added to the active roster for up to three weeks as he continues to work his way back.

The 6-foot-5, 310-pound Okung said his main priority during the past few months was making sure the blood clots were treatable and that he could live a healthy life. Once that was determined, he had conversations with his family about whether to return for a 10th NFL season and third with the Chargers.

"I've always been an optimist, but family is a priority," he said. "This is a combination of hard conversations with my family, internally looking at myself and making the decision that it did make sense to keep playing. I don't think anyone doubted that I could return, but I am grateful."

Okung has said that he was initially hesitant to see a doctor but that shortness of breath that was affecting him in practice made him visit an urgent care facility, where tests revealed the embolism. Doctors told him the decision to get examined likely saved his life.

Okung is hoping his experiences will serve as a cautionary tale for other pro athletes.

"When you talk about athletes and our health, it's very difficult to go to the doctor or even take care of ourselves. I was forced into that," he said. "Deep vein thrombosis is an ailment that not a lot of players are paying attention to and it is becoming more prevalent. It is something that players should be checking themselves for."

It is unlikely Okung will be ready for Sunday's game at Tennessee, but he hasn't ruled it out. He is not worried about his technique and abilities, but the biggest thing is feeling the speed of the game again.

Okung was doing regular position drills with the rest of the offensive line.

Okung's return is a rare bit of good injury news for the Chargers, who suffered a key loss to the offensive line last week when center Mike Pouncey underwent season-ending neck surgery.

The line currently doesn't have a lot of experience, with the most seasoned starter having six seasons. Trent Scott, a second-year undrafted player, has been at left tackle.

"Anytime you get a Pro Bowl player back, it is a big lift. Trent has battled his tail off but it would be great having Russell back," offensive coordinator Ken Whisenhunt said.

However, they did place wide receiver Travis Benjamin on injured reserve due to a quad injury he suffered in Sunday's loss to Pittsburgh. Benjamin has been plagued by various injuries the past two seasons and had only six receptions for 30 yards this season.