Chiefs aim for sixth straight win over Jaguars on Sunday 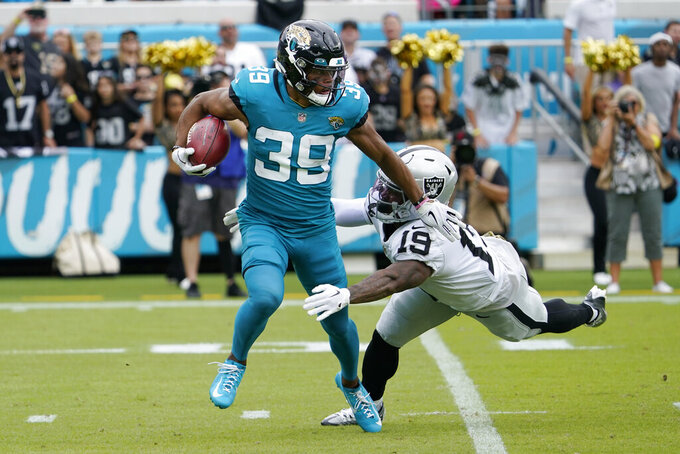 TURNOVER DIFFERENTIAL: Jaguars minus-2; Chiefs minus-1.

JAGUARS PLAYER TO WATCH: RB Travis Etienne Jr. has gained at least 100 yards from scrimmage in five straight games, the second-longest active streak in the NFL. The only Jacksonville players with six in a row are Fred Taylor and Maurice Jones-Drew. Etienne has surpassed 100 yards rushing in the past three games.

CHIEFS PLAYER TO WATCH: DE Carlos Dunlap needs a half-sack to become the 41st player with 100 since the sack became an official stat in 1982. Dunlap had 1 1/2 sacks last week against Tennessee, when starting DE Frank Clark served the first of his two-game suspension for violating the NFL's conduct policy.

KEY MATCHUP: Chiefs TE Travis Kelce against Jacksonville LB Devin Lloyd. There's a good chance the perennial Pro Bowl tight end will be covered by the Jaguars rookie at some point in the game. Kelce had 10 catches for 108 yards against the Titans last week, while Lloyd tops NFL rookies with 69 tackles and is third in passes defensed with seven.

KEY INJURIES: Jaguars FS Rayshawn Jenkins was in the concussion protocol this week. TE Evan Engram was slowed in practice by a back injury. ... Chiefs WR Mecole Hardman has been dealing with an abdominal injury.

SERIES NOTES: The Chiefs have won five straight against the Jaguars, three of them at Arrowhead Stadium. The past four have been with Andy Reid on the Kansas City sideline. Jaguars coach Doug Pederson played for Reid in Philadelphia and began his coaching career there, then was the Chiefs' offensive coordinator from 2013-15.

STATS AND STUFF: The Jaguars outscored the Raiders 27-3 after falling behind 17-0 in last week's win. It was the second-largest comeback in franchise history. ... Jaguars WR Christian Kirk has seven catches of at least 25 yards this season. ... The Jaguars lead the league in passes defensed with 59. The Jets and Eagles are second with 48. ... Kansas City has won 10 straight games in November, a streak that began Nov. 18, 2019, against the Chargers. Chiefs QB Patrick Mahomes is 12-2 in his career in November. ... The Chiefs are 47-3 since 2018 when they hold their opponent to fewer than 27 points. ... Reid needs 11 more wins to tie Hall of Fame coach Tom Landry (250) for fourth most in the regular season. ... Mahomes set franchise records for completions (43) and attempts (68) while throwing for 446 yards last week against Tennessee. ... Mahomes passed Trent Green for second in Chiefs history with 21,596 yards. ... Mahomes had the tying TD run against the Titans, giving him nine for his career. That is one behind Alex Smith for the franchise record for a quarterback. ... Chiefs TE Travis Kelce needs one more 100-yard receiving game to pass Rob Gronkowski (32) for most at his position in NFL history. Kelce has caught a pass in a Chiefs-record 135 consecutive game. ... The Chiefs ran 91 offensive plays last week against Tennessee, one off the franchise record. ... Kansas City allowed five pass completions to Titans QB Malik Willis. It was tied for the eighth fewest in franchise history. ... Chiefs WR Mecole Hardman has TD catches in three straight games and five touchdowns total over that span.

FANTASY TIP: Chiefs WR JuJu Smith-Schuster has become a reliable starter in most fantasy leagues, even though Mahomes spreads the wealth more than most QBs. Smith-Schuster nearly had his third straight 100-yard receiving game against the Titans, settling for 10 catches for 88 yards. He also has TD catches in two of his past three games.