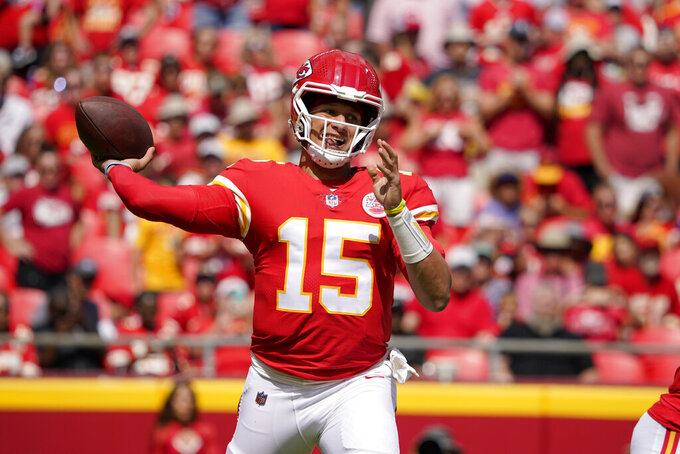 KANSAS CITY, Mo. (AP) — Nobody could blame Patrick Mahomes for not knowing what to expect when the Pro Bowl quarterback walked onto the field for the season opener a year ago behind an entirely rebuilt Kansas City Chiefs' offensive line.

It wound up being one of the best in the league, and a big reason why they hosted a fourth straight AFC title game.

Mahomes will be in a somewhat similar situation when he walks onto the field for the opener Sept. 11 at Arizona, only this time it will be just about everyone catching his passes that will be new. The biggest move in recent Chiefs' history came early in the offseason, when they traded explosive wide receiver Tyreek Hill for a package of draft picks and committed to using the money they saved by not signing him to a long-term deal to create a much deeper core of pass catchers.

They signed JuJu Smith-Schuster away from Pittsburgh and Marquez Valdes-Scantling away from Green Bay. They drafted Skyy Moore in the second round and supplemented those three newcomers with a couple of wild cards.

The returns through training camp and the preseason have been nothing but positive.

“It's going to be a very diverse group in that receiving room, all guys that can make an impact in the game,” said Mahomes, who took the extraordinary step of inviting all of them to his Texas home in the offseason to begin building chemistry.

No longer can a defense take away Hill, focus on Travis Kelce and rest easy that nobody else will hurt them.

“We can kind of interchange those guys and they can all just make plays happen,” Mahomes explained. “It’s going to make our offense — we’re going to be different, but I think we’ll still be able to go out there and have a ton of success.”

Still, everything that Kansas City does in pursuit of a seventh consecutive AFC West title and third Super Bowl appearance in four years begins with Mahomes, who is feeling rejuvenated after a full offseason program. He was recovering from a foot injury a year ago that some believe curtailed his mobility and creativity during the early portion of the season.

He also has that brutish offensive line ahead of him. Everyone is back from the group that was just getting to know each other last fall, including franchise left tackle Orlando Brown Jr., who skipped the offseason program after the sides failed to reach an extension but reported to camp in time for the start of padded practices and the entire preseason schedule.

“Well, they're getting an idea of how (Mahomes) plays," Chiefs coach Andy Reid said. “If something's not there, how he's moving. We have these scramble rules that we spend a bunch of time on and you go over them and go back and look at the execution of those all the way around. But guys are always open for him when he's moving."

In other words, perhaps Mahomes does know what to expect from his new bunch of wide receivers this season.

The Chiefs, who were third-from-last in the NFL in sacks last year, used a first-round pick on George Karlaftis and signed two-time Pro Bowl pass rusher Carlos Dunlap early in training camp. Those two will be counted upon to help a slimmed-and-hungry Frank Clark and Pro Bowl defensive tackle Chris Jones turn those sack numbers around.

The Chiefs let safety Tyrann Mathieu and top cornerback Charvarius Ward depart in free agency, along with depth pieces such as Daniel Sorensen. But their new-look secondary could be improved with the arrival of safety Justin Reid, first-round pick Trent McDuffie and fellow rookie defensive backs Bryan Cook, Joshua Williams and Jaylen Watson.

Clyde Edwards-Helaire, a surprise first-round pick in 2020, has struggled to live up to expectations during his first two injury-filled seasons. Now, Edwards-Helaire finds himself in a crowded running back room alongside Jerick McKinnon and Isaih Pacheco, a seventh-round pick from Rutgers who has impressed in camp.

The Chiefs play in arguably the toughest division in the NFL, where all four teams have legitimate playoff aspirations. They also face the AFC South and NFC West along with the Bills, Buccaneers and Bengals, which means 10 of their 14 opponents had winning records last season. Eight of them made the postseason.