Column: In Miami, a showdown of the NFL's worst 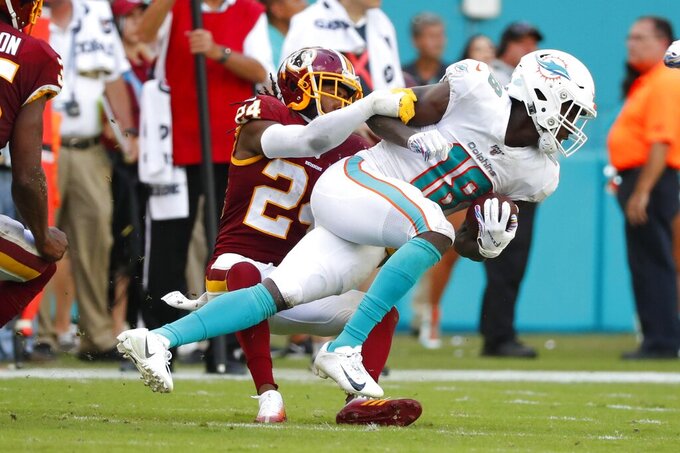 In the air above Hard Rock Stadium, before the bungling Redskins and hapless Dolphins took the field, a plane towed a banner calling for Miami fans to do their part to help get Washington team president Bruce Allen fired.

On the ground, it was not only a battle for the bottom but a fight for the future — a future that for the Dolphins now appears to include Alabama quarterback Tua Tagovailoa.

And in the half-empty stands, some visiting fans wore paper bags over their heads and held up signs asking Daniel Snyder to sell his perennially underperforming team.

Who said there wasn't anything at stake Sunday in a showdown of the worst the NFL has to offer? In, of all places, the same stadium where the best of the NFL will be playing in the Super Bowl in February.

There was plenty on the line in a game someone had to win, and someone eventually did. The Redskins held on to a 17-16 victory that gave them their first win of the season even if the performance wasn't nearly good enough for their fans to dump the paper bags for next week's game against the San Francisco 49ers.

In a game of firsts, the Dolphins actually made things exciting at the end by going for a 2-point conversion and the win. Naturally, it failed but, hey, a team has to start somewhere.

More importantly, Miami remained winless and in prime position to take Tagovailoa in the first pick of the 2020 draft. And for now, about all the Dolphins' fans can bank on are moral victories and promises of a brighter future.

For Washington, it was not only the first win in six games but also the first for interim coach Bill Callahan, who took over after Jay Gruden was unceremoniously dumped earlier in the week. That was some cause for celebration among the Washington faithful, as was the play of rookie receiver Terry McLaurin.

It won't be enough to suddenly lift the Redskins into playoff contention, far from it. But it was enough to get out of the winless column and get a break when the discussion turns to the worst teams in the NFL.

The Redskins, of course, are going nowhere but give McLaurin a break. He's a rookie who hasn't been around the chronic mess in the nation's capital, where Washington has made the playoffs only five times in 20 years with Snyder as owner.

Against the Dolphins, though, they were favored to win — by about 5 points in most sports books. Not only did the Redskins fail to cover the spread, they would have lost the game outright had the Dolphins run a better play than the pass Kenyan Drake dropped for the 2-point conversion with 6 seconds left.

That's life at the bottom of the pile in the NFL, where the only thing the Dolphins will be favored for this season is getting the first pick in next year's draft. The Twitter hashtag for this game was #tankforTua, but the Dolphins are so bad that losing a game comes naturally, without any tanking necessary.

Even when Miami cut the score to 17-10 in the second half, the Dolphins were called for offside after recovering an onside kick that would have given them the ball at the Washington 47. That was bad all by itself, but the second time in five games where they have been offside this year in an onside kick they recovered.

A botched kick, and a botched conversion. The best you can say about the Dolphins was at least they took a chance and tried.

"Games like this, two winless teams, everybody pulls out the stops," Callahan said. "It was wild all the way to the last minute."

Wild and not completely meaningless, which in better times would mean more for both teams. Unfortunately, there's a lot of season left to be played and a lot more losses to be endured.

When you're bad in the NFL, you stay bad for a long time.

"There's no quick fix or magic in the NFL," Callahan said. "You've got to dig yourself out of the hole."

Despite some fun at the end Sunday, the battle for the bottom showed that hole remains awfully deep for both teams.