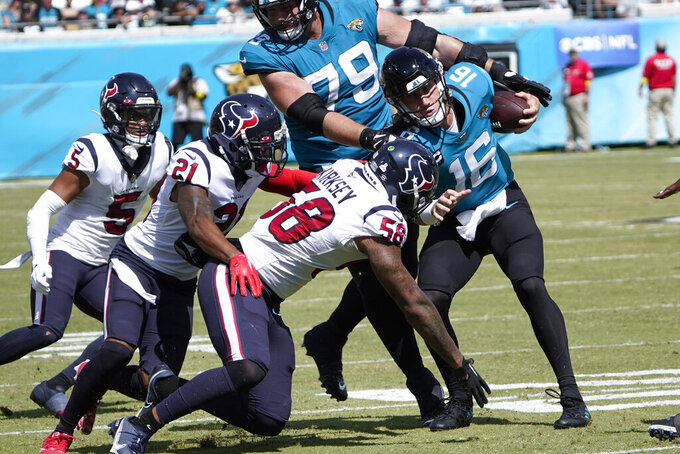 JACKSONVILLE, Fla. (AP) — Trevor Lawrence came to Jacksonville as a generational quarterback prospect. He’s starting to look like another first-round mistake by the Jaguars.

One week after a five-turnover performance at Philadelphia, Lawrence delivered another stinker in a 13-6 loss to AFC South rival Houston. The former Clemson star and the top pick in the 2021 NFL draft showed little resilience after last week’s game or the worst interception of his young career.

“This one stings, and everybody feels it in there as you should,” Lawrence said. “It’s a division game. It’s a game where we feel confident and thought we had a good plan. We just didn’t execute it, and we’ve got to do better.”

It starts with Lawrence. He completed 25 of 47 passes for 286 yards and two interceptions against the Texans (1-3-1), who won their ninth straight in the series. His most troubling pass came on the opening drive of the second half.

On second-and-1 at the Houston 7-yard line, Lawrence rolled right and threw directly at cornerback Derek Stingley Jr. Lawrence could have thrown the ball away. He could have tried to run for the first down. He could have made any number of better decisions for the Jaguars (2-3). He didn’t, and Stingley got the first pick of his career.

It prompted more question about Lawrence, who has eight touchdown passes and eight turnovers this season.

“We’ve got to all look in the mirror and be accountable,” Lawrence said. “Myself, I’ve got to look at things that I’ve got to do better. Obviously, the turnovers. Can’t let that happen. … We talked about in the locker room. Told the guys we can’t all have an off day on the same day. You can have one, pick him up and you go make a play for him. That’s fine, but we all just got to be better.”

Lawrence didn’t get as much help as he could have from those around him. Zay Jones, Evan Engram and Travis Etienne dropped passes, and Jacksonville's offensive line had some issues.

High-priced receiver Christian Kirk, who made plays all over the field in the first three games, was mostly missing for the second straight week. He finished with one catch for 5 yards.

“I don’t worry about Trevor,” Kirk said. “He’s so mature in just his approach, his mentality and the way he goes about things. He’s already critical on himself. I know he’s going to do everything in his power to be the best that he can be and putting this team in the best position to win so I don’t worry about him at all.”

Kirk blamed some of the woes on the flow of the game.

“It’s tough when you get in games like that. It’s low scoring and we’re not really in a rhythm,” he said. “It’s natural for all of us to press a little bit, and that’s OK because we want to win football games and we’re all going to do individually what we can do to try to make plays and try to make things happen. I think at times we were all there.”

But the spotlight, for better or worse, is on Lawrence.

“We’ve just got to continue to keep throwing,” coach Doug Pederson said. “Keep putting him in situations like that. He's going to get better. I’m not worried about that all. We have a lot of faith and trust in him, and he can definitely do the job. We’ve seen it this season. We’ve just got to keep working on it.”