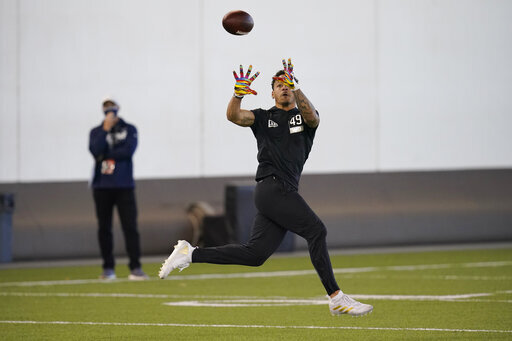 Two days down, yet the NFL Draft is only half done and there are still plenty of celebrated college players available to be picked.

The defensive players of the year in both the Big Ten and Pac-12 are still on the board heading into Saturday’s fourth through seventh rounds.

Looking for a quarterback? There are multiyear starters from which to choose.

And several decorated offensive playmakers are still left to fill the remaining 154 picks.

Some of the best and most notable players still available in the NFL Draft.

Nixon was a junior college transfer who played two seasons at Iowa and emerged as the Big Ten's defensive player of the year in 2020. The 313-pound Dixon had 13.5 tackles for loss, including 5.5 sacks, in eight games for the Hawkeyes last year. He is disruptive, not always consistent and stout against the run, but there is potentially good fourth-round value in Nixon.

The Pac-12 defensive player of the year plays with great effort and fills up the stat sheet. In just six games last year, Hufanga had three sacks, four interceptions, and five passes defended. At 6-foot and barely 200 pounds, he lacks the speed to play deep safety and the size to play close to the line, but his instincts and intensity could make him a contributor on defense and special teams.

The Crimson Tide had eight of the first 38 players drafted, an unprecedented haul. Brown, a massive people-mover at 344 pounds, is likely the next Alabama player to be picked. Or is it linebacker Dylan Moses, who was solid as a senior in 2020 after coming back from an injury the year before?

Wallace was an All-American as a sophomore in 2018, catching 86 passes for 1,491 yards and 12 touchdowns. Injuries limited him to nine games in 2019 and last year he was solid — though not quite spectacular - in another abbreviated season.

Wallace is among a solid group of receivers still left that includes Amon-Ra St. Brown from Southern California, Simi Fehoko of Stanford, Marquez Stevenson of Houston and Seth Williams from Auburn.

Book was a three-year starter who led the Irish to the College Football Playoff twice and guided Notre Dame to more victories than any quarterback in program history. His accuracy down the field and decision-making improved in 2020. Combine that with mobility and creativity, and he seems to have the tools to at least be a long-term backup.

If Book is not the next quarterback drafted, maybe it will be Sam Ehlinger, a four-year starter at Texas; Shane Buechele, who started 42 games at Texas and SMU; or Jamie Newman, the former Wake Forest starter who transferred to Georgia but opted out of last season.

Gainwell was an All-American in 2019 as a redshirt freshman when he had 2,069 yards from scrimmage and 16 touchdowns. An undersized runner, Gainwell looks like a player capable of being a third-down back and maybe more.

Only four running backs were drafted in the first three rounds. There could be double that number on Day 3: Michael Carter of North Carolina, Rhamondre Stevenson of Oklahoma, Khalil Herbert of Virginia Tech, Jemar Jefferson of Oregon State and Chuba Hubbard of Oklahoma all the most likely to be selected.