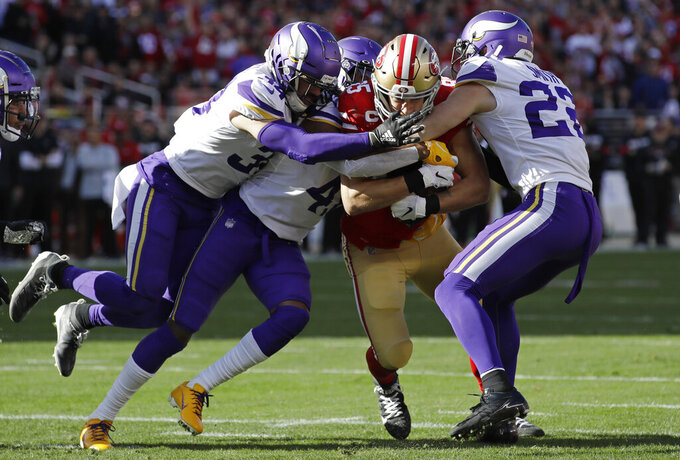 SANTA CLARA, Calif. (AP) — No tight end in NFL history has been as productive as George Kittle at catching the ball over the first three years of a career.

A player that skilled as a receiver might be expected to ask, or even demand, for the ball to come his way plenty of times on offense.

But instead of spending his time telling his coaches on the San Francisco 49ers or quarterback Jimmy Garoppolo how open he is, Kittle has other play-calling requests instead.

"Everyone knows what he's done in the pass game, but he has never once in three years came up to me during a game and said, 'Hey I need this route.' Or, 'Hey we've got to do this,'" coach Kyle Shanahan said. "He's never once came up to me about a pass play, but he comes up to me about every seven plays about what type of run play we need to do, who we need to allow him to hit, things like that. It makes it very fun to call plays for him."

For as accomplished a receiver as Kittle may be with his 197 catches and 2,664 yards receiving ranking as the most ever by a tight end through three seasons, it's his ability as a run blocker that truly sets him apart from some of the other top tight ends in the league who do most of their work in the passing game.

That skill was on display last week when Kittle's blocking helped the Niners (14-3) generate a franchise-playoff record 47 carries for 186 yards in a 27-10 victory over Minnesota.

Right tackle Mike McGlinchey said Kittle has the mentality of an offensive lineman and is one of the key components of the running game.

"That's what's really cool about George and the best part about him," McGlinchey said. "He takes more pride in how he's doing in the run game than he does in the pass game even though he's the best at both."

The 49ers' running game looks completely different when Kittle is healthy and is able to seal the edge with his blocks that help fuel the outside zone running game. San Francisco averaged only 2.9 yards per carry in three games when Kittle was either sidelined or severely limited by injuries to his knee and ankle. That compares to a 4.8 yard average in the other games.

So that shows the kind of impact he can make even when he's not producing in the passing game.

He had only three catches for 16 yards for his fewest yards in a game since his rookie year in 2017 in the playoff opener against the Vikings but that didn't bother him at all.

Perhaps that's to be expected from a player who caught only 48 passes in 25 college games at Iowa, as he fell to the fifth round of the draft.

"We were just shocked that he was still sitting there in the fifth," Shanahan said. "But, he had all the measurables and everything you could see the stuff on tape. But, he didn't have a lot of production in the pass game. They didn't do that a lot at their school, they did more run game and he was a great run blocker. I feel like people called him just a run blocker just because he didn't have the stats. But, stats don't tell you much, it's how you move."

The Niners figure to rely more heavily on Kittle in the passing game this week when they host the Green Bay Packers in the NFC title game.

While the Vikings were the top-ranked defense in the NFL in the regular season when it came to defending tight ends, the Packers haven't had that same kind of success.

Kittle had six catches for 129 yards, including a 61-yard TD, when the teams played back in November in a 37-8 win for San Francisco.

"He's always a big part of our plan," Shanahan said. "But, you never know how the game's going to go until the game starts. And a lot of things go and you take into account over that. But, you have no idea what coverages they're going to play, how the game's going, but we'll see. He always has a chance to."

NOTES: LB Kwon Alexander (pectoral) and DE Dee Ford (quadriceps, hamstring) were the only players limited at practice. ... The Niners practiced in the rain but the forecast for Sunday is dry.