QB switch does nothing to help improve terrible Texans 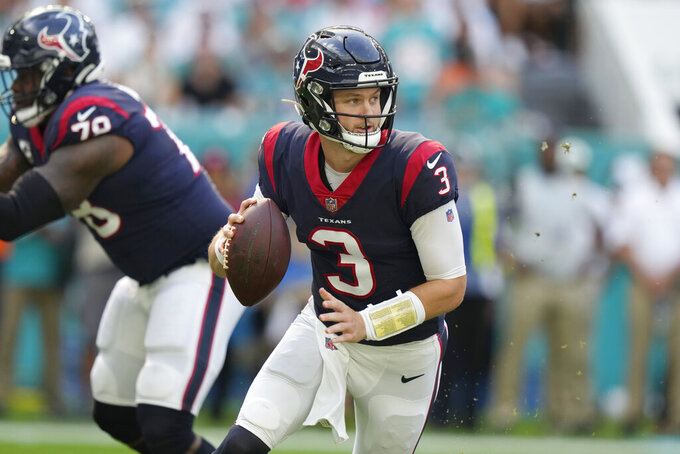 Houston Texans quarterback Kyle Allen (3) looks to pass the ball during the first half of an NFL football game against the Miami Dolphins, Sunday, Nov. 27, 2022, in Miami Gardens, Fla. (AP Photo/Lynne Sladky)

HOUSTON (AP) — The Houston Texans benched Davis Mills for Kyle Allen this week with coach Lovie Smith saying the switch gave them their best chance to win against the Miami Dolphins.

Instead, it led to yet another embarrassing loss in a season full of them to keep the Texans (1-9-1) stuck on just one win.

Allen threw for 215 yards with two interceptions in his first game this season as the Dolphins raced to a 30-point halftime lead in a 30-15 victory Sunday.

“We as an offense can’t allow that to happen,” Smith said of the terrible first half. “And our quarterback starts it all. So, Kyle didn’t start, and the offense didn’t start the way we needed to.”

Despite his awful performance, Allen will start again Sunday against Cleveland, with Smith saying it wouldn’t be fair to give him the job and then yank him after one game.

“We want to see him,” Smith said. “We’ve got to eliminate those turnovers. But I thought he did some good things throughout the game. But we’re not quite there yet as a team.”

Allen, who is in his fifth NFL season but has mostly served as a backup, remains confident that he can help the team improve.

“I know I’m a much better player than what I showed (Sunday),” he said. “Every team is still building, especially us. We have one win. We’re trying to just get a win every week. So, we’ve just got to keep pushing.”

Smith saw it as a positive sign that his team fought back in the second half to cut the deficit after falling into the huge early hole. But veteran receiver Brandin Cooks said that didn’t matter.

The Texans had five sacks Sunday, including four of Tua Tagovailoa before he ended his day in the third quarter. Maliek Collins led the team with two.

As usual, there’s plenty to pick from here, but the Texans must find a way to get their running game going again if they hope to even be competitive the rest of this season. Houston had just 36 yards rushing Sunday for the second-worst rushing performance of the season after finishing with a season-low 21 yards rushing last weekend.

Rookie Dameon Pierce, who had 772 yards rushing after nine games, has managed just 8 yards rushing in each of the past two games to keep the running game stalled.

“We’re in the dump right now,” Pierce said. “But we’re going to figure something out and we’re going to get our thing back on track and going where we need to be moving forward.”

RB Dare Ogunbowale had a 3-yard touchdown in the third quarter Sunday. It was his first score since Dec. 26 of last season with the Jaguars.

The Texans hoped Allen would take better care of the ball following the benching of Mills after he threw an NFL-high 11 interceptions 10 games this season. Instead, his two interceptions Sunday were a big factor in the team’s sixth straight loss.

LB Christian Harris injured a shoulder in the first quarter and didn’t return. ... RB Rex Burkhead left the game to be evaluated for concussion in the fourth quarter.

3 — Houston had a season-high three turnovers Sunday. Along with Allen’s two interceptions, Jordan Akins fumbled after a reception in the second quarter. The ball was recovered by Miami and returned for a touchdown that made it 27-0.

The Texans will search for ways to improve this week before hosting a Cleveland team that will start former Houston quarterback Deshaun Watson in his season debut after serving an 11-game suspension for sexual misconduct allegations.

Houston selected Watson 12th overall in 2017 and he started four seasons before demanding a trade before last season and refusing to play for the Texans. He was traded to the Browns in March.