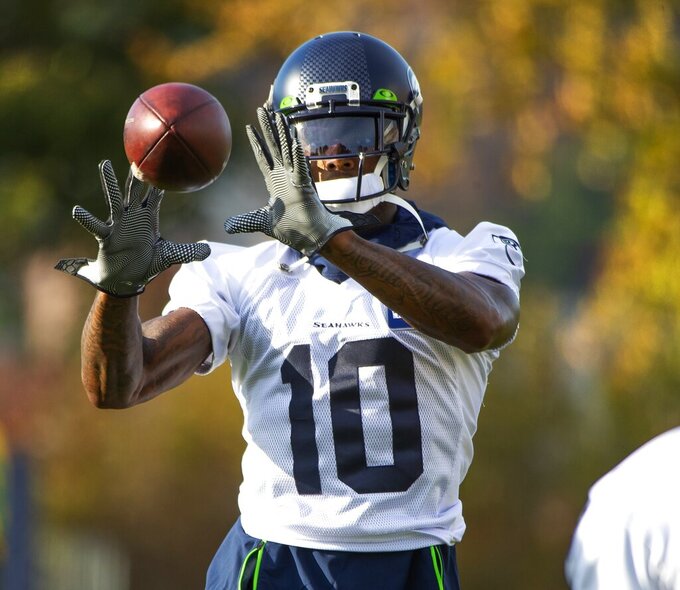 RENTON, Wash. (AP) — Seattle Seahawks coach Pete Carroll is trying to temper the expectations as Josh Gordon is integrated into the team.

Right now, Carroll is more concerned about just seeing Gordon get through a full week of practice.

"He's a smart football guy. He's going to get it. It's not going to take him very long. I just need to see him practice. I can't tell you anything right now," Carroll said Thursday.

The speed with which Gordon is able to pick up the Seahawks' system and find a role — even if it's small — will ultimately determine if he plays Monday night when the Seahawks face division foe San Francisco.

Gordon is healthy, having passed his physical in Seattle following knee and ankle injuries that eventually led to his release from New England. He's clearly talented. And Seattle believes it has the structure in place to help Gordon be successful without falling back into off-field problems.

The team, which claimed him off waivers, said Gordon wouldn't talk until Saturday after completing his first week of practice.

"We've done our work, as we do," Carroll said. "Whatever a guy brings to us we're going to try and investigate it. I can't tell you we've done a perfect job of it but we're trying, we're trying to figure it out. We want to complement the support system that all of our guys have, so we're trying to do that in any way we can. We're trying to help our guys be the best they can possibly be and that's all part of that process."

The wide receiver position didn't seem like a priority, but the Seahawks couldn't pass up a chance to get Gordon. He's another big-bodied pass catcher in the mold of what Carroll likes to have in his offense. If it goes well, Gordon could become an additional red-zone target after Seattle lost tight end Will Dissly to a torn Achilles tendon last month.

Ultimately, it's a low-risk move for Seattle and yet another chance for the oft-troubled Gordon.

"I think that he can help stretch the field," Seahawks leading receiver Tyler Lockett said. "I think it can put a lot of teams in a bad position because they have to figure out what they want to do with us defensively. I think it's going to help us overall."

Before being released, Gordon was among New England's leading receivers this season, with 20 catches for 287 yards and a touchdown through six games. But he was placed on injured reserve two weeks ago with knee and ankle injuries. His tenure with New England was over a week later.

Gordon was reinstated by the NFL in August after having been suspended indefinitely in December 2018, missing the final three games of last season for violations of the league's substance abuse policy. It ended what had been a strong year for Gordon, who had 40 catches for 720 yards and three touchdowns in 11 games.

A 2012 second-round draft pick by the Cleveland Browns, Gordon was also suspended for the first two games of the 2013 season for a substance abuse policy violation but still caught 87 passes for nine touchdowns and a league-leading 1,646 yards and was named to the All-Pro team.

Gordon is the latest acquisition by the Seahawks who could be ready to play almost immediately. When Jadeveon Clowney was acquired just days before the start of the season, Seattle got him ready to play in Week 1. Same with Duane Brown when Seattle traded for the left tackle in the middle of the 2017 season. He started immediately after his arrival.

"I think what we do is put guys in positions where they were successful in the past," linebacker K.J. Wright said. "... Some things guys did in their past that they want to do here they can't do, which is frustrating. They just have to understand when you come here, we're going to do some stuff for you to put you in a position to be successful but at the end of the day we do have our own style and brand that you just have to roll with."