Steelers QB Roethlisberger on slide: "I need to play better" 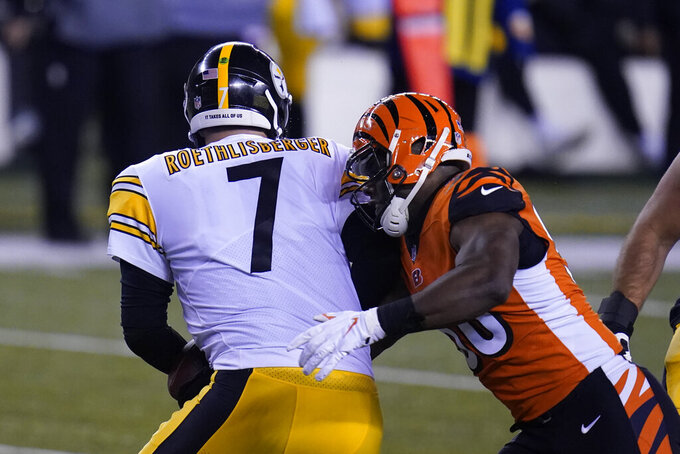 And do it quickly if the Steelers (11-3) are to regain any sort of momentum heading into the playoffs. Eight weeks of brilliance to start the season in his return from right elbow surgery that cost him most of 2019 has been followed by five weeks of mediocrity. The nadir — he hopes — came during a listless 27-17 loss to Cincinnati on Monday night in which he passed for all of 19 yards in the first half.

That's not a typo. While he recovered a bit in the second half, Roethlisberger finished 20 of 38 for 170 yards with a touchdown and an interception. Those numbers don't include a botched snap exchange with center Maurkice Pouncey that set up a Cincinnati field goal or a short flip to JuJu Smith-Schuster that led to a Smith-Schuster fumble after getting drilled by Bengals safety Vonn Bell. Cincinnati scored a touchdown on the ensuing possession while building a 17-0 advantage it didn't come close to squandering.

Roethlisberger insists he's as healthy as can reasonably be expected heading into Week 16. Yet he's also aware at 38 he can't do what he did when he was 23. The Steelers have insisted on resting him during Wednesday practices for years, a routine they stuck to this week even with the offense sputtering.

The AFC North title that seemed a mere formality a month ago is on far shakier ground as Christmas approaches.

The offense that hasn't scored more than 20 points in over a month met without coaches via videoconference, a meeting Roethlisberger stressed wasn't about the team's recent performance as much as about the opportunities that still lie ahead.

The next two weeks should provide a preview. The Steelers host Indianapolis (10-4) on Sunday before wrapping the regular season at Cleveland (10-4) on Jan. 3. A win in either game assures Pittsburgh of at least one home playoff game at Heinz Field. It would also go a long way toward restoring some of the swagger missing for the better part of a month.

Roethlisberger's performance has been the fulcrum. After a 103.0 quarterback rating during an 8-0 start that thrust him into the fringe of the Most Valuable Player race, his numbers have fallen back to Earth, and so have the results. He's thrown eight touchdowns against six interceptions over Pittsburgh's last five games and looked tentative against the going-nowhere Bengals.

Following a loss at Buffalo on Dec. 13, Roethlisberger said “if I don't play good enough football, I need to hang it up.” He insists he's doing what he can to keep that day at bay. As bad as it has been lately, he also carved up the Bengals for four touchdowns on Nov. 15.

Smith-Schuster doesn't think you even need to go back that far to find Roethlisberger playing at a high level. Roethlisberger was solid in the second half on Monday night, leading the team to 17 points and throwing a 23-yard touchdown pass to Diontae Johnson down the seam — as good as any throw he's made in a while.

“I think we’re going to ride with (him) regardless,” Smith-Schuster said. “We’re going to follow Ben’s lead. That’s what we did. We went into halftime, we made some adjustments and we came out, we all followed his lead and we were able to put points on the board, but it wasn’t good enough.”

The Steelers know it needs to be better — and be better soon — if it wants to erase the stink of its slump before the playoffs begin.

“I think these next two games, we really have to show ourselves what we can do on offense," Smith-Schuster said. “Our defense has been playing a good enough job to stop them. We start slow every game and we’re not physical enough. That’s something that Ben told us. We’re going to stick together. Times like this, we’ve just got to become closer as family.”

NOTES: Smith-Schuster said he is abandoning his pregame ritual of dancing on the midfield logo and then posting it on the social media app TikTok after opponents in back to back weeks said they were bothered by the practice. “Honestly, I don’t want to be a distraction to anybody,” Smith-Schuster said. “My team or the other team.” ... LB Vince Williams returned to practice on Wednesday after being taken off the reserve/COVID-19 list.