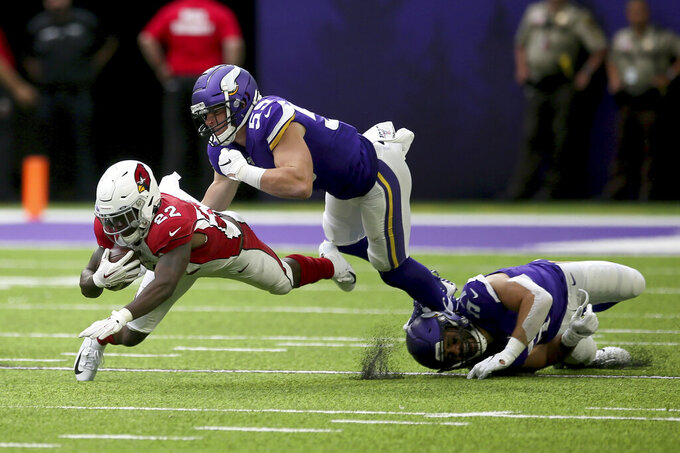 FILE - In this Aug. 24, 2019, file photo, Arizona Cardinals running back T.J. Logan (22) runs from Minnesota Vikings linebacker Cameron Smith (59) during the second half of an NFL preseason football game in Minneapolis. Smith will miss the 2020 season because of a heart condition. It was discovered after he tested positive for COVID-19 upon reporting to training camp two weeks ago. The Vikings made the procedural move on Monday, Aug. 10, 2020, of waiving Smith with a non-football injury designation. (AP Photo/Jim Mone, File)

Coach Mike Zimmer said Tuesday that Smith was “in good shape” after the procedure Monday in Philadelphia, where he'll stay “for awhile" to recover.

“He talked before he left about trying to help out in any way possible: coming to meetings, he’ll draw cards, help with the scout teams, anything,” Zimmer said. "We’re hopeful he’s able to come back and play football, but more importantly, he looks like he’s going to be great in health.”

Smith said earlier this month the rehabilitation process would take about three months until he's cleared for unrestricted physical activity. He'll miss the 2020 season. Drafted in the fifth round out of USC in 2019, Smith said he's confident he'll be able to resume his career in 2021.

“Because I’ll be fixed. I’ll be better, and I’ll be in a healthier state than I have been for the past 23 years,” Smith said.

Another backup linebacker, Ben Gedeon, was scheduled to meet with a doctor Wednesday, Zimmer said, for clearance to return to the field. Gedeon, who was placed on the physically unable to perform list at the beginning of training camp, missed 10 games over two different stints due to concussion symptoms last season.