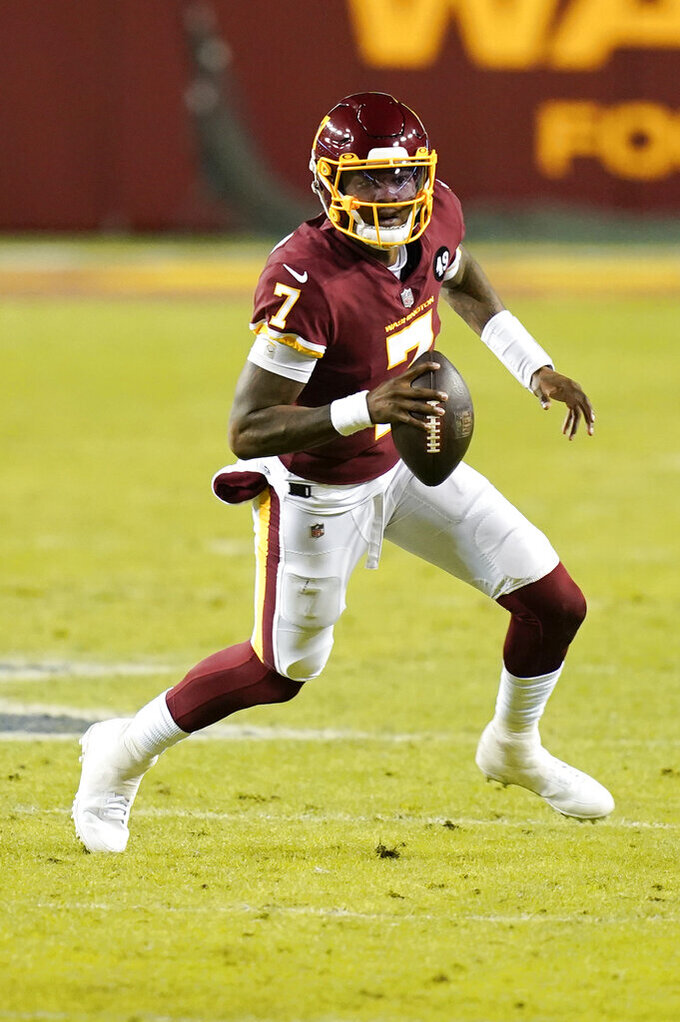 Washington Football Team quarterback Dwayne Haskins (7) runs with the ball during the first half of an NFL football game against the Carolina Panthers, Sunday, Dec. 27, 2020, in Landover, Md. (AP Photo/Carolyn Kaster) 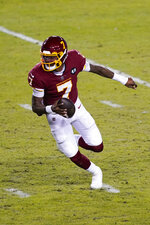 Washington released 2019 first-round pick Dwayne Haskins on Monday, less than 24 hours after he committed three turnovers in a loss to Carolina and in the aftermath of another violation of pandemic protocols.

Haskins started in place of injured quarterback Alex Smith despite being disciplined for breaking COVID-19 rules by partying with several people without a mask. He was fined $40,000 and stripped of his captaincy, but coach Ron Rivera opted to stick with Haskins because Smith was still injured and he didn't have another established QB on the roster.

“My time with the WFT has unfortunately come to an end,” Haskins tweeted. “I thank the team & fans for the opportunity to play for the team I grew up rooting for. I take full responsibility for not meeting the standards of an NFL QB & will become a better man & player because of this experience.”

Rivera said Monday morning either Smith or Taylor Heinicke would start the regular-season finale at Philadelphia with the NFC East title on the line. It was clear Rivera was done with Haskins, whom he had shuffled to the bottom of the depth chart for the second time this season.

“Sometimes you have to hit rock bottom before you can dig your way back out of it,” Rivera said. “I hope he learns from these experiences. Hopefully, they’ll make him stronger and they’ll help him and, hopefully, when he gets his next opportunity, he’ll make the best of it.”

Haskins was 14 of 28 with two interceptions and a fumble against the Panthers before being benched for Heinicke, who hadn't played in the NFL since 2018. Rivera was asked what he'd like to see from Haskins in the next week and responded, “Just improvement.”

That will have to come elsewhere. He has some tools to succeed in the pros, but hasn't been able to put it all together in 16 appearances.

“You watch his talent, and you see the arm,” Rivera said. "That’s the thing that I think is his most redeeming quality as a quarterback, which I think is probably the most important thing.”

But it's far from the only thing, his off-field behavior outweighed his potential. A favorite of owner Dan Snyder's from his time at a Washington-area high school, Haskins missed the final play of his first NFL victory last year while taking a photo with a fan in the stands, disappeared from practice with a mysterious illness after being benched and demoted in October and twice violated rules for conduct in the middle of a pandemic.

The 23-year-old Ohio State product said he tried not to let his tumultuous week of attending his girlfriend's birthday party with several people not wearing masks, photos surfacing on social media, apologizing to coaches and teammates, being fined and losing his captaincy affect his play. But he was clearly down in the dumps and despondent in a postgame video call he did after driving home from the stadium.

“It was definitely the hardest week of my life," Haskins said. "I’m just going to bounce back and move forward, pray and get my life together.”

Washington’s previous regime drafted Haskins 15th overall in 2019, the third QB taken after Kyler Murray and Daniel Jones. He finishes his time with the organization 3-10 as the starter, including 1-5 this season, with 12 touchdowns and 14 interceptions.

The team's last first-round QB bust, Robert Griffin III, tweeted Monday: “Wishing the best for (Haskins). You are only 23! Learn from this and bounce back.”