After slow start, Patriots set for playoff push in 2nd half 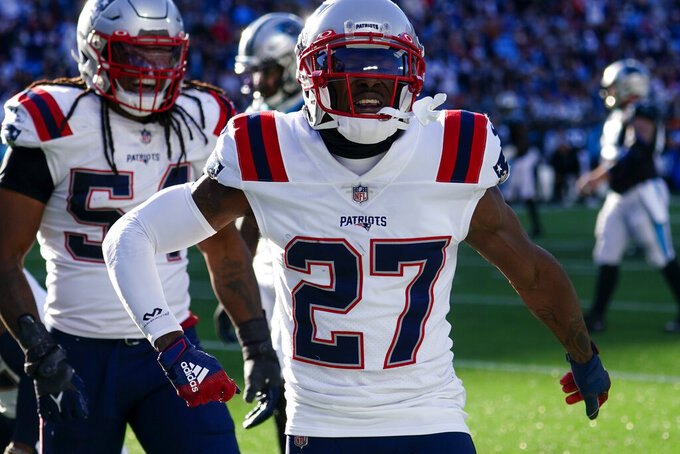 New England Patriots cornerback J.C. Jackson celebrates after an interception in the end zone during the second half of an NFL football game against the Carolina Panthers Sunday, Nov. 7, 2021, in Charlotte, N.C. (AP Photo/John Bazemore)

FOXBOROUGH, Mass. (AP) — This past offseason was filled with atypical moves by the New England Patriots.

First, the normally frugal Bill Belichick went on a rare spending spree, committing lots of money to bring in free agents on both sides of the ball.

Then, he did what he’d never done before during his Patriots tenure, using a first-round draft pick on a quarterback to bring in Mac Jones. Belichick took that a step further, opting to cut veteran Cam Newton at the end of training camp and giving the keys of the offense to Jones.

After a 1-3 start to the season, the moves appear to be working out.

The Patriots (5-4) have won four of their past five games and are above .500 for the first time this season. The current three-game win streak is their longest since Tom Brady’s final season in New England in 2019.

There are still issues to work out, but it’s put the Patriots in position to make it back to the playoffs after finishing 7-9 in 2020 and missing the postseason for the first time since 2008.

“One game at a time. I think if you ask anybody on this team, that is how we have been taking it,” linebacker Matt Judon said. "We have to continue to stack the wins and not get too far ahead of ourselves.”

Jones has been his toughest critic in his first NFL campaign, but his numbers put him at the top of his quarterback class. He currently leads all rookies in completion rate (68%), yards (2,135) and touchdowns (10).

His focus is on cutting out the mistakes, which includes seven interceptions.

“There is just reoccurring themes in terms of communication and I can do a better job with that. Part of it is just the inexperience, but there is no excuse for that,” he said. “I have been here for quite a while now and I can figure out the looks that I am not used to seeing, and just go from there. But we have made progress every game I feel like.”

One thing that's helped the offense has been running back Damien Harris' production.

He’s bounced back from his late fumble in the Patriots’ season-opening loss to Miami, posting two 100-yard games. He leads the team with seven rushing TDs.

New England is just 1-4 at home, with three of those losses coming in one-score games. The Patriots will play four of their final eight games at Gillette Stadium. It includes matchups with Cleveland (5-4), Tennessee (7-2) and division-leading Buffalo (5-3). Protecting home field is a must if they want to remain in the postseason picture.

The $56 million over four years ($32 million guaranteed) that the Patriots committed this past offseason to Judon has been money well spent.

He leads the team with nine sacks, 16 quarterback hits and 10 tackles for a loss. It’s helped fortify a defense that currently ranks fourth in the NFL, allowing 18.9 points per game.

Jonnu Smith was hoping he and fellow new addition Hunter Henry could form a formidable two-headed attack at tight end. While Henry has found a groove recently (five TD catches over the past six games), Smith has struggled.

He’s contributed in the run game, but it will be interesting to see what new ways offensive coordinator Josh McDaniels employs to get him involved in the second half of the year.

Most of the biggest injuries in the first half of the season have been on offense. Running back James White is out for the season with a hip injury. Right tackle Trent Brown hasn’t played since the season opener and remains on injured reserve with a calf issue. But the offensive line has stabilized without him by moving Mike Onwenu over from left guard and shifting Ted Karras to Onwenu’s spot.

Defensively, Belichick says he's optimistic about edge rusher Chase Winovich and linebacker Harvey Langi being able to return soon. That would help add depth to a group that's found some consistency over the past five games.

22 — The number of interceptions for cornerback J.C. Jackson since his rookie season in 2018. That is the most in the NFL over that span. With five picks this season, he is the first Patriot since 1976 to have three consecutive seasons with five or more INTs.

The Patriots return home to host a Browns team in Week 10 that is coming off a 41-16 win at Cincinnati.