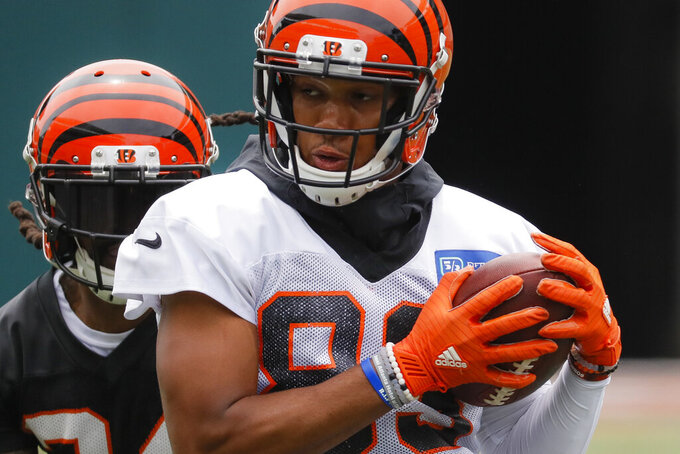 CINCINNATI (AP) — Andre Smith had to go the other way when he walked into the Bengals' locker room for the start of training camp. In his latest incarnation in Cincinnati, the offensive tackle was given a space on the other side of the room next to the quarterbacks and tight ends.

The locker was open and, as a newcomer, he didn't have much choice where to store his stuff. He also lacks a defined role.

"I just roll with the punches," he said. "You never know what could happen. I'm a swing guy on one play, the next play I'm starting, so you never know."

The Bengals reported Friday for the start of their first camp under coach Zac Taylor, with a lot of new systems yet to learn and abundant questions about an offensive line that's again a work in progress.

The line has been in flux since the end of the 2016 season, when the Bengals let left tackle Andrew Whitworth leave for the Rams and right guard Kevin Zeitler signed with the Browns. They thought they'd smoothed it out when they drafted left tackle Jonah Williams with the 11th overall pick, but a shoulder injury will sideline him for the season.

Left guard Clint Boling retired two weeks ago because of a blood clot, further complicating matters. The coaching staff plans to try various combinations during camp, with Smith serving as a backup to left tackle Cordy Glenn and right tackle Bobby Hart at the outset.

Injuries and the line's struggles were significant factors in the offense finishing last in the league in 2017 and 26th last year in total yards.

Smith, 32, a first-round pick in 2009, is in his fourth stint with the Bengals. He went to Minnesota in 2016, returned in 2017, left for Arizona in 2018 and returned last November when the line was sapped by injuries. He spent this summer working out and waiting for a team to offer a chance.

The Bengals invited him for a workout Thursday to gauge his shape and decided to sign him for camp.

"Just a situation happened where Clint (retired), Jonah went down and they knew me and I came in and did everything I needed to do yesterday, and it worked out," Smith said.

In addition to trying players at different spots on the line during camp, the Bengals will be watching to see who gets released by other teams as the preseason approaches.

"It's going to be a work in progress," said Duke Tobin, director of player personnel. "I don't feel like it can't come together, but we've got work to do."

GETTING STARTED: The Bengals' first practice will be Saturday in Dayton, part of the NFL's celebration of its centennial season. The league considers a game at Triangle Park in Dayton on Oct. 3, 1920 as the first in its history, matching Dayton and Columbus from the newly formed American Professional Football Association. The Bengals will work out at Welcome Field.

NOT READY: Long snapper Clark Harris and center Billy Price haven't yet been cleared for full workouts. ... The Bengals signed defensive end Immanuel Turner and waived running back Darrin Hall on Friday. Turner is a free agent out of Louisiana Tech. Hall was acquired off waivers from Cleveland in May.