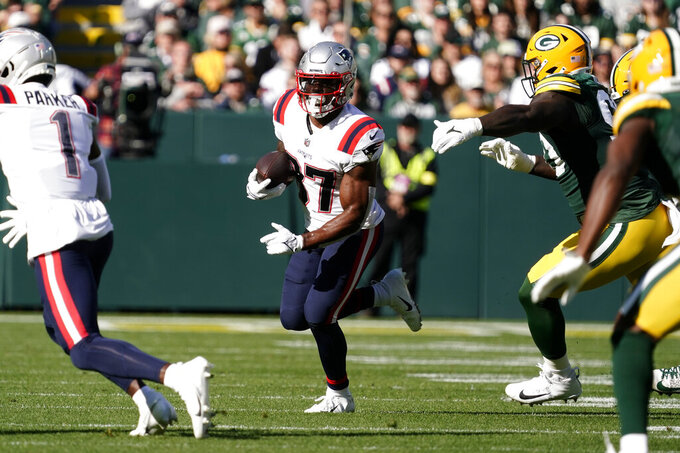 New England Patriots running back Damien Harris (37) carries the ball up field during the first half of an NFL football game against the Green Bay Packers, Sunday, Oct. 2, 2022, in Green Bay, Wis. (AP Photo/Morry Gash)

That issue is particularly imperative this week as the Packers prepare to face NFL rushing leader Saquon Barkley and the New York Giants on Sunday at London’s Tottenham Hotspur Stadium.

“Man, we’ve got to just focus up, honestly,” defensive tackle Kenny Clark said. “There’s too much inconsistencies when you talk about the run game with us. We’ll have two good quarters, and then the third quarter we’ll have a little lull and let guys get going and let their momentum get going.”

Clark, a two-time Pro Bowler, has called this the deepest front seven he’s played on since joining the Packers in 2016. The Packers (3-1) rank fifth in the league in total defense and seventh in scoring defense.

Yet they’re still having trouble against the run. They’ve given up 4.97 yards per carry to rank 24th out of 32 teams.

“I know we can be better and we will be better,” Packers coach Matt LaFleur said. “We have to be better, quite frankly, because we’re going up against the No. 1 rush offense in the National Football League.”

Chicago’s David Montgomery rushed for 122 yards on only 15 carries in a 27-10 loss at Green Bay on Sept. 18. The Packers limited Tampa Bay’s Leonard Fournette to 35 yards on 12 carries the following week, but their run defense took a step back again last weekend.

The Giants (3-1) expect to see the best version of Green Bay’s run defense.

“I think when a team has given up a lot of rushing yards early in the season, they probably spend most of their time that following week of practice probably firing down on that,” Giants center Jon Feliciano said. “So I’m expecting them to come out and try to stop the run.”

The Giants have an NFL-leading 192.5 yards rushing per game thanks largely to Barkley, who has regained the form that made the former Penn State star the No. 2 overall pick in the 2018 draft.

Barkley has rushed for 463 yards and is coming off a 146-yard effort in a 20-12 victory over the Bears. Barkley is gaining 5.5 yards per carry, a significant jump from the 3.7 he averaged last season.

“He's the best in our business right now, statistically,” defensive coordinator Joe Barry said. “He's just an all-around complete back. It's got to be a collective group effort this week because you can't tackle that guy with one person.”

The Giants head into London with an uncertain quarterback situation. Starter Daniel Jones sprained his left ankle against the Bears, though he did practice on a limited basis Wednesday. Backup Tyrod Taylor is in concussion protocol. The Giants also have Davis Webb on the practice squad.

Barry noted that the Packers fared well against the run for most of that game, but suffered a letdown when they allowed consecutive touchdown drives in the second half. New England gained 141 of its 271 total yards during those two possessions.

“Those two drives, we had some lapses,” Barry said. “We turned it into much more of a dramatic game than it needed to be.”

The Packers have their own injury concerns.

Veteran safety Adrian Amos left the Patriots game with a concussion and didn’t practice Wednesday. Rudy Ford, acquired before the season primarily to boost the special teams, filled in for Amos at safety against New England and had seven tackles.

They also must prepare for this test while dealing with the logistical challenges that come with playing their first international game.

“It feels like a Thursday night game for us as coaches just in terms of all the preparation you’ve got to do,” LaFleur said.