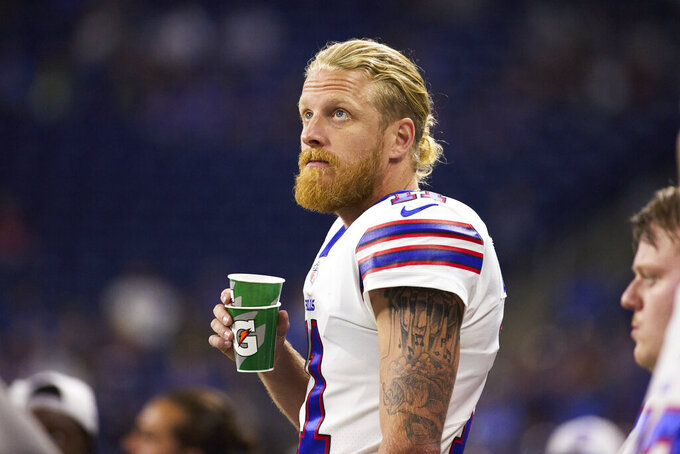 FILE - Buffalo Bills wide receiver Cole Beasley is shown on the sideline during an NFL preseason football game against the Detroit Lions in Detroit, in this Friday, Aug. 13, 2021, file photo. Beasley and Gabriel Davis must spend at least five days away from the team facility after having close contact with a trainer who tested positive for COVID-19, a person familiar with the situation told The Associated Press on Tuesday, Aug. 24, 2021. That means Beasley and Davis will miss the Bills’ final preseason game on Saturday, when Buffalo hosts the Green Bay Packers. (AP Photo/Rick Osentoski, File)

ORCHARD PARK, N.Y. (AP) — One of Bills general manager Brandon Beane’s worst fears was realized Tuesday when receiver Cole Beasley was among four players sidelined for at least five days after being deemed to have close contact with a trainer who tested positive for COVID-19.

Though the start of the five-day reentry depends on when each person last had contact with the trainer, all four players are expected to miss the Bills’ final preseason game on Saturday, when Buffalo hosts the Green Bay Packers.

Beasley and Davis are projected to be among Buffalo's top four receivers, while Lotulelei is pegged to regain his starting job as the Bills' top run-stuffer after he opted out from playing last season because of COVID-19 reasons. Butler started 11 games for Buffalo last season and is competing for the primary backup job behind Lotulelei.

Though relieved this happened during the preseason, Beane said it’s a reminder of how quickly a team’s preparations can be derailed.

“This is our new normal. It’s not the normal we like, but it’s the world we’re in,” Beane said. “It’s been going on so long that you expect the unexpected with this. We don’t have it figured out. We don’t have it under control. And we just have to deal with the cards that we’re dealt.”

The first hint of concern came in the morning when the trainer, whom Beane did not identify, tested positive for COVID-19 after complaining of not feeling well.

Beasley, Davis and Lotulelei were among numerous players sent home before practice, while Butler was sent home following practice after it was determined he was in contact with the trainer.

Additional players, including linebackers Matt Milano and A.J. Klein, were sent home for precautionary reasons, but have since been cleared by the NFL to resume practicing on Wednesday.

And just like that, the contentious topic of vaccinations which clouded much of the Bills offseason has returned less than three weeks before the defending AFC East champions open their regular season hosting the Pittsburgh Steelers on Sept. 12.

The focus of attention on Buffalo began in April when quarterback Josh Allen called the decision to get vaccinated a personal choice.

A month later, the NFL informed teams they cannot release players simply because they are not vaccinated. The league’s message came in response to Beane hypothetically suggesting he would consider doing so if it would provide more freedom within the team facilities for meetings and offseason programs.

Beasley, meantime, has been an outspoken critic against vaccinations and the league’s COVID-19 policies. In June, he posted a statement on social media threatening to retire after the NFL and NFLPA announced new rules for vaccinated and unvaccinated players.

He opened training camp by reading from a statement in which he repeatedly referred to a lack of transparency and information on vaccinations. Beasley’s comments contradicted those by Bills coach Sean McDermott, who has said the team has done everything it can to educate players.

Beasley has also questioned why vaccinated players aren’t tested every day, and released a rap song in which he says there “ain’t a vaccination” for him.

The effects of COVID-19 hit home last month, when starting left tackle Dion Dawkins spent four days in the hospital questioning whether he would survive after contracting the coronavirus while he was partially vaccinated.

Beane said the vaccination rate among Bills players is about 80% — the same number it was when training camp opened last month.

“It’s the world we live in and I’m not going to let it get me down,” Beane said, when asked getting vaccinated could have prevented players from being placed in the reentry protocol. “It’s the way it is, and we’ll deal with it now, and we’ll continue to deal with it as we move forward here.”

The Bills shored up two spots on their roster by claiming defensive tackle Joey Ivie and receiver Rico Gafford off waivers.